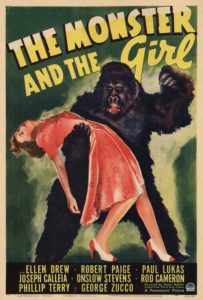 I saw a crazy movie the other night and it got me to thinking about the way films burrow into our brains and pop out in unexpected ways and places. The movie is a sort of noir from 1941 called The Monster and The Girl, and it’s a true oddity for its time.

The set-up, at least, is classic noir. Susan (Ellen Drew) meets a dreamy fella, Larry (Robert Paige), falls madly in love with him, and he with her, they get married, have a wild party in a hotel with some admittedly suspicious looking friends of Larry’s, but, when Susan wakes up the next morning all disheveled and ravished in her trashed hotel room, she’s all alone. One of those suspicious characters barges in, tells her Larry never existed, see, and Susan, if she knows what’s good for her, will start working at a certain club, if you know what I mean.

What he means is, now that Susan’s been faked into marrying and having sex, now that her man is gone, and now that she’s a ruined woman, she’ll be dancing and whoring herself for crime boss Bruhl (Paul Lucas)—or else.

So it’s a charming story already. Thing is, she’s got a brother, Scot (Philip Terry), the most perfect guy in the world, a gentle postman who in his spare time plays organ in a church. He tracks down Bruhl only to have a murder rap hung on him. Goes to court, gets the chair.

Only what’s that? A mad scientist wants to harvest Scot’s brain after he’s dead? Sure, says Scot. Why not?

Well, the scientist, in his mad scientist laboratory, transplants Scot’s brain into the head of a gorilla, like you do, only oh no!—the gorilla escapes!

Yes, the human-brained gorilla escapes and goes on a killing rampage, picking off Bruhl’s henchman one by one, leaving Bruhl for last.

Aside from the brain transplant/gorilla angle, it’s a beloved set-up. It’s Darkman and a hundred other revenge pictures, more or less. Man is killed/left for dead, returns to exact revenge on his killers. 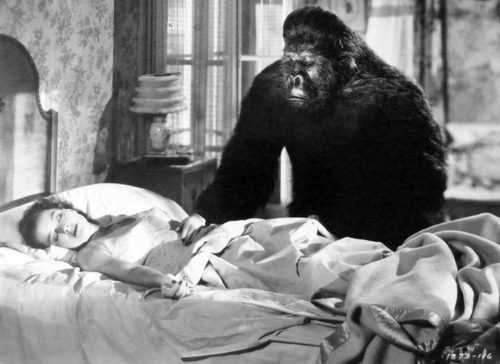 The part that hit me was the end. The gorilla is shot while killing the last of his victims in a hotel room in front of a stunned Susan. Susan watches the gorilla—her brother, she can see it in his eyes—die, and it’s all just terribly sad in a very particular and, to me, familiar way.

Familiar because the vibe of this scene is indentical to the end of An American Werewolf In London. It’s so on the money it bowled me over. The particulars are different, it’s brother and sister as opposed to lovers, the gorilla isn’t shot by police, they’re in a hotel room—but the man trapped inside a monster, dying next to a woman who loves him, how this feels as it plays out, is identical.

Knowing, like one does, that John Landis is obsessed with movie apes and ape-monsters, I was certain he’d not only seen The Monster and The Girl, but adored it utterly. I was not wrong. I checked my copy of Landis’s giant Monsters In The Movies book, and there it was, listed in the Monstrous Apes section. The gorilla is played by special effects man and ape enthusiast Charles Gemora, known for his sideline as a maker of and performer in highly realistic gorilla suits. Says Landis of Gemora:

He gives one of the great gorilla performances in The Monster and the Girl, a peculiar mixture of mad-scientist, brain-transplant, gangster, and boy-and-his-dog movie that is one of my favorites.

Landis’s first film as a director was Schlock (’73), about an apeman falling in love with a girl in the suburbs. A gorilla shows up in The Kentucky Fried Movie, and again in Trading Places. I think that’s it. Let me know if I’m forgetting any Landis ape sightings.

The Monster and The Girl is very much a B movie. The writing is lousy, the acting is wooden, the editing makes its 65 minute running time feel long. It’s not so much a lost classic as a lost what-the-fuck-was-that? And still it’s exceptionally weird and compelling. I wonder how conscious Landis was of taking its ending and using it to fuel the emotional power of An American Werewolf’s? Something about those sad human eyes in the body of a monster must have hit him hard as a kid. I wouldn’t be surprised if it came out unconsciously. Perhaps Landis would like to stop by and comment? 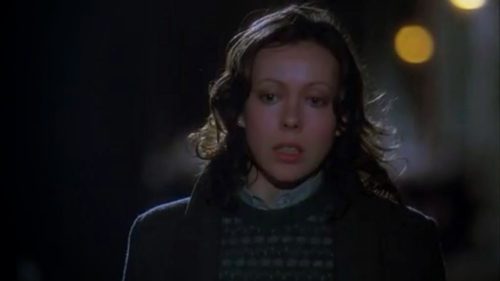 A last look at the monster