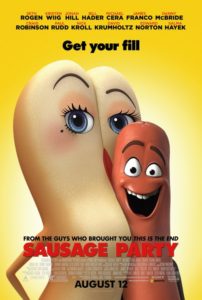 Swear words, despite what your ten year old cousin thinks, aren’t in and of themselves funny. It takes context to squeeze a laugh out of another fuck, cunt, or asshole. Not that it’s rocket science. Comedians have been wringing yuks from fucks since the first comedian found himself bombing. When all else fails, go blue. But doing it well is no small matter.

Sausage Party, the new anti-Pixar animated flick, was written by Seth Rogen and Evan Goldberg (and Kyle Hunter and Ariel Shaffir). Not a one of them has a clue how to make swearing funny.

From the opening line of the movie, which I believe is “Shit, shit!”, to the very end, which I might have slept through, every character swears constantly, in exactly the same way, to no comedic effect whatsoever. The movie bludgeons with curses. Each is delivered in a way that says, “Hey look! An animated character just used a naughty word! Hilarious, right?” There is no rhythm to the swearing. It’s a ball-waxing shitshow of boring monotony.

Sausage Party exists in another dimension, one in which there is no South Park. Has Seth Rogen and Co. never seen South Park? Never heard of the South Park movie musical? It came out seventeen years ago, maybe they forgot about it? Sausage Party seems to think it’s breaking new and exciting ground by being both animated and—ohmygod!—full of naughty language. It is not breaking new ground. It is not breaking anything but its own wind, over and over and over again. 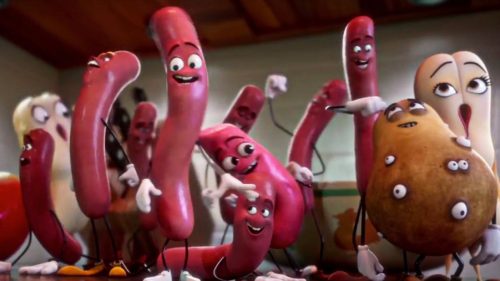 It’s possible to swear up a storm and be funny every time—but only if you know what you’re doing and why you’re doing it. Watch Bad Santa for a lesson in how to deliver a fucking curse with panache. Comedic cursing depends entirely on who’s saying it and the rhythms with which it’s said. Watch the South Park movie, or really any episode ever of South Park. The worst episode of South Park is still funnier and smarter than Sausage Party. South Park goes overboard too, but it’s a TV show, they write those things in like two days, they can be excused for the swearing coming off as a cheap way to get a laugh now and then.

There’s no excuse for Sausage Party. Rogen worked on this movie for years. You might easily picture him and Goldberg and friends sucking down bongloads and writing this thing. The jokes consist of awful food puns and curse words. It’s like your ten year old cousin writing a movie for his ten year old friends.

Which it’s all well and good to get in touch with one’s inner filthy child. See the fucking South Park movie to see how well it can be done, you badger raping cuntwaffles! But it’s adult intelligence that makes the best stupid shit funny. The South Park musical isn’t just kids swearing, it’s a statement about the act of swearing itself. And it’s a spot-on Disney musical parody, with genuinely awesome songs. 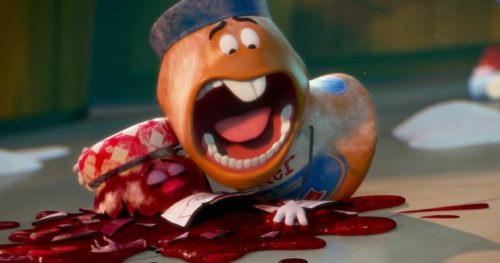 Sausage Party wants in on the musical thing too, but only as half-assedly as its half-assed jokes. It opens with a song, written by no less than Alan Menken, the sole joke of which is that it’s full of cursing. Each fuck and shit and cunt is crammed into it without the least bit of style or humor. It’s a far fucking cry from “Uncle Fucker.”

The song also sets up what reviews written, I have to assume, by your ten year old cousin, tell me is the meaningful, thoughtful angle of the story: the foodstuffs of the grocery store imagine heaven awaits them outside the store’s doors. Humans are the gods who bring them to this “great beyond.” But is it all a big lie? Yes. Yes it is. There’s some feeble attempt at a South Park-like bashing of both sides of the religion/atheist debate, but since the makers of Sausage Party have never so much as heard of South Park, they don’t have twenty years of teaching on how this can be pulled off. Instead they parrot some dull bullshit about how the great beyond is a nice story to believe in, and how believers shouldn’t be made fun of, despite their story being a big lie. We see it’s a lie. Food is brought out of the story, the humans eat it. So the both sides of the issue thing is a wash. 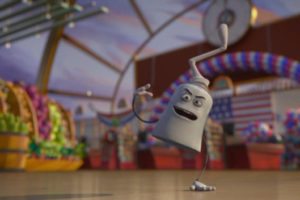 There’s a sort of villian in the movie. It’s a douche. I mean literally, it’s a plastic douche. That’s the joke. It’s really angry and swears—not more than anyone else, because every character swears all the time in the same way—but somewhat louder and more angrily. Every time it was on screen, I wanted out of the theater. It plays no role in the plot.

I don’t know what the plot is. I don’t care. Sausage Party is a fucking bore. Thank you and goodnight.