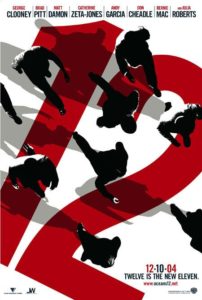 Ocean’s Twelve (’04) isn’t a heist movie. It’s an anti-heist movie. It takes the first movie and flips it on its head. There is no heist in Ocean’s Twelve other than a fake one. The whole movie is a con, not of a character, of the audience. This made many in the audience unhappy. They didn’t like being conned. They didn’t like the movie. I think it’s great. So does director Steven Soderbergh, who says it’s his favorite of the three.

Soderbergh’s Ocean’s Eleven is all about his unique style. For an updating of a goofy kind of classic, it does everything it needs to do. Its form is pure boilerplate heist. A group of cons is assembled to rob a Vegas casino. They do so in style. Ocean’s Thirteen plays like a standard sequel to Eleven. The cons make a fool of a different Vegas casino owner with the help of the owner they conned the first time around—but they still mess with him in the end too, because they’re just that cool. It shimmers with Soderberg’s visual style, but feels like a flat, abbreviated exercise in rote hipdom. Why anyone thinks this is better then Twelve is beyond me.

Twelve is the outlier. As written by George Nolfi (who adapted it from one of his own unproduced screenplays), it includes every element we expect in a heist movie only to misuse, discard, and/or ignore them. Which I can understand why this makes some people unhappy. I find its trashing of tropes weird and refreshing. 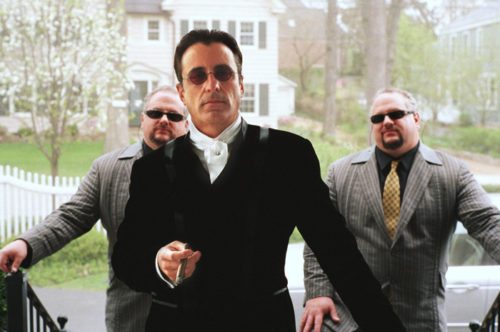 It begins by erasing everything gained in the first movie. Terry Benedict (Andy Garcia), the conned casino owner, finds the gang and demands his money back, plus interest. Already we’re put in a strange place for a heist movie—the gang needs to make a robbery to make up for the robbery they already pulled off. They skedaddle to Amsterdam to make an initial grab (does it even matter for what?), but it turns out they were beat to the punch—a superstar thief, the Night Fox, was there first.

Danny Ocean (George Clooney) meets the Fox, Toulour (Vincent Cassel), who’s got a personal thing against Ocean. Toulour’s mentor, the greatest thief of them all, LeMarc, thinks Ocean’s a better thief than Toulour. Toulour intends to prove otherwise. The target: the Fabergé Imperial Coronation Egg. Whoever steals it first wins.

The Night Fox stops by to gloat

Long story short, there must be an hour’s worth of Ocean and the gang trying to steal the egg only to fail, spectacularly, and wind up nabbed by the police (led by super thief-thwarter Isabel Lahiri (Catherine Zeta-Jones)). But wait! It was all a part of the con! They won! Only no, wait, they didn’t. They stole the egg and got away, but the egg was a fake. Toulour stole the real one the night before.

But wait again! Turns out that whole hour of Ocean’s gang plotting and thieving was itself an elaborate ruse. In flashback, we see Ocean and Rusty (Brad Pitt) meeting LeMarc (Albert Finney) and coming up with the real heist, which is nothing more than a simple backpack switch on a train. The Ocean gang had the egg all along. Toulour stole a fake one.

Which is to say, the entire movie is a fake-out. There is no heist. The first heist, in Amsterdam, we don’t see but for a few moments in flashback, and was a failure anyway. The egg heist, the meat of the movie, is all a con. None of it is real. The egg was taken essentially off-screen with nothing more than a distraction. The amazing team of thieves? None of their special talents are needed. We, the audience, have been conned.

And why not? What’s a heist movie but a con, anyway? Nothing is really stolen. It’s a movie. Ocean’s Twelve takes this conceit one step further. It’s a meta-heist. The fake movie heist is itself a fake. Look at The Amazing Yen (Shaobo Qin). What happens to him is a perfect distillation of the movie’s uninterest in heist movies. In Eleven, his ability to fold himself up is an integral part of the plan. In Twelve, he’s again folded up, this time in a piece of luggage—which is promptly lost. He turns up eventually, to be seen joyfully bouncing on a bed, no longer trapped in a suitcase. And…that’s it. There’s no need for his special talent. There’s no need for anyone’s. Nothing is real. 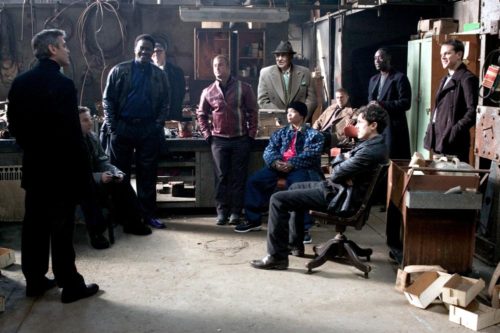 The gang gets back together

Part of the gag is the use of Ocean’s girl, Tess, played by Julia Roberts. She’s used in the fake egg heist as a distraction because of her uncanny resemblance to famous actress Julia Roberts. This gag seems to annoy people, but it fits thematically. It’s another reminder that this is all unreal. A movie heist is not a real heist. Bruce Willis shows up to play Bruce Willis. He’s not actually himself, he’s playing himself. He’s not surprised when Tess is unmasked. Julia is his real-life pal, he knew something was off all along.

This kind of meta-game is a risky move. Just because there’s an inner logic to a movie that messes with its own genre doesn’t guarantee its watchability. I’ve often been on the complaining end of movies ripe for after-the-fact discussion I find interminable to actually sit through. Just because you can write a term paper on a movie doesn’t make it fun to watch.

The cop has second thoughts

For me, Soderbergh takes care of this problem by making Ocean’s Twelve the most stylish movie he’s ever directed. Every shot in here is breathtaking. Every decision of how to film every scene is in itself a master class on directing, on what to show, what to hide, when to cut, why to cut (and recall, Soderbergh is his own cinematographer and editor). Take the opening sequence in which Benedict tracks down the members of the gang. There’s a scene for everyone. Some are a little longer than others, but I think the longest is still less than a minute. Each consists of a single shot. In some the camera moves, in others it doesn’t. Each is lit and framed uniquely and beautifully. Only some have dialogue. Each tells its own tiny story. As a sequence, it’s a thing of wonder. And we’re still at the beginning of the movie. Nothing’s even happened yet, and every frame is gripping. I saw Ocean’s Twelve when it opened and this is all I remembered about it, that I sat through the whole thing with my jaw on the floor. I didn’t know what the movie was about and I didn’t care. Hell, even the beginning of the end credits sequence, a series of shots of poker tables strewn with drinks and cards and chips, is better lit than the entirety of almost any movie you can name.

Watching it again recently to see if my initial impressions remained, I wound up liking the movie even more than the first time. Now the nonsensical plot came through as intentional thematic meta-fuckery, so I had something else to like aside from Soderbergh’s genius direction. Not that I needed it. I could watch this movie all day long just for the editing. For the lighting. For the production design. For the goddamn colors. Has any director had a better command of what colors fill his frame? Kubrick? Sirk? Kar Wai?

Not to give everything away, but there’s even closure in the end for super agent Lahiri, who’s got more reason than even she suspected to have made the mythical LeMarc the thief she wants to find more than any other. Is it all a bit too neat and tied up? Absolutely. That’s the kind of movie it is. The Oceans movies aren’t about killers and guns and grim reality. They’re about cool and/or goofy guys stylishly stealing millions to a killer soundtrack and having a great time doing it. In Eleven it was all very amusing if not a bit by-the-numbers, by Thirteen it had grown stale, but in Twelve the conceit is used to its fullest. Soberbergh is on fire. There’s good reason it’s his favorite of the three; it’s the best.

The real heist, in B&W flashback