Is the book always better than the movie? Nope. Only most of the time. The Sisters Brothers, when I read the book six or seven years ago, came off as a kind of fake western, a western written by someone (Canadian author Patrick deWitt, namely) without any knowledge of the old west outside of what he’d seen in the movies, who by removing contractions in everyone’s dialogue found the secret to sounding old-timey, with a story that meanders here and there without ever leaving the surface of western tropes and imagery, and without ever plunging down deep where the juicy existential bits live. I came away slightly amused by its humor without feeling any connection to its story or characters.

I thought it might make a good movie, though.

So too did John C. Reilly, whose production company bought the rights back in 2011, when the book was published. Come 2018, and here he is with his The Sisters Brothers movie, directed and co-written by French filmmaker Jacques Audiard (A Prophet), starring Reilly and Joaquin Phoneix as the titular Eli and Charlie Sisters, Jake Gyllenhaal and Riz Ahmed as prospectors Morris and Hermann, and Rutger Hauer as the mean old Commodore.

What’s especially odd about this otherwise only slightly odd movie is how, from the start, it feels as though, like the book, it’s only going to skate along the surface of western tropes, then, at every turn, unlike the book, doesn’t. Rather, in a slow, sneaky way, it grows into itself and, by its end, has found an emotional depth never realized by the book. The ending feels like it comes out of nowhere and also like the movie never would have worked without it.

The Sisters brothers are guns for hire, introduced mid-job in a darkly lit sequence shot through with the bright orange flares of gunfire. They work for the Commodore, a rich, mean bastard people nevertheless can’t seem to stop stealing from. Including this one fella, Hermann Warm, who the Commodore already sent a tracker, Morris, to find. Only it seems Morris has taken up with his quarry.

Charlie and Eli are sent out to find and kill Hermann, and, as in any half-decent western, start to wonder at the sense of their chosen profession, and why they might have come to this place in life. 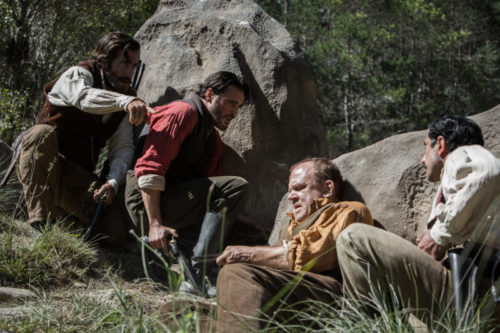 The fellas trapped by a bit of gunplay

Hermann, meanwhile, didn’t steal any money from the Commodore. Rather, it’s what’s inside Hermann’s head the Commodore is after, namely the chemical formula for a liquid which, when stirred into river water, causes any gold to glow, the one fantastical element in this otherwise real-world period piece.

The movie is set in 1851, during the goldrush. Picking up chunks of gold like sleeping fish seems like a quick way to get rich for all involved. Only thing is, Hermann’s liquid is a little tangier, let’s say, than one would think ideal.

The plot is the plot, but what drives The Sisters Brothers is the relationship between Charlie and Eli. Eli is the tender, thoughtful one, the one who’d prefer owning a little store to killing folks, while Charlie is played by Phoenix as a man whose worst demons are held in check by the lesser ones of drink and gunplay, and who can’t see any other way to live. Like everything else in this movie, their struggle isn’t made a big deal of, it’s just there, kind of like it always is in this type of movie, and then… like everything else… it accrues emotional resonance when you’re not looking. I liked that.

So The Sisters Brothers is both typical of westerns and, a little bit, not, making for a slightly odd and enjoyable experiece I wasn’t expecting. 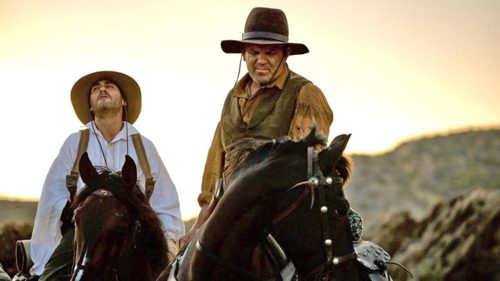 2 responses on “The Old West Oddness of The Sisters Brothers”