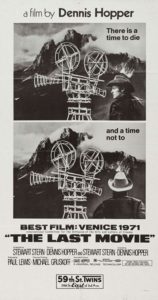 Easy Rider made Dennis Hopper’s career as a director. His aptly named follow-up, The Last Movie, ended it. Made for less than half a million, Easy Rider earned around $60 million. It was the final death knell for so-called Old Hollywood, in its last throes since ’67, when The Graduate and Bonnie and Clyde arrived and took over the world (not to mention more under-the-radar beginnings-of-the-end like Corman’s The Trip, starring Dennis Hopper and Peter Fonda).

One would think everyone would be throwing money at Hopper after a success like Easy Rider. Thing is, Hopper was a famously drug-addled madman with an ego the size of the moon. Sure, Easy Rider was a smash, but only after Hopper, having turned in his four hour edit, was hustled out of town and Henry Jaglom brought in to cut the movie down under two hours, a cut Hopper hated at first, but agreed to go along with. (And, of course, as is always the goddamned case with older movies, all of that extra footage is lost, gone, destroyed…sigh.)

So no one was exactly fighting over who got to finance Hopper’s next movie, the idea for which he’d come up with one stoned night and given to his friend Stewart Stern to write. Stern had most famously written Rebel Without a Cause, in which Hopper had made his film debut. The Last Movie was going to be a little bit different. 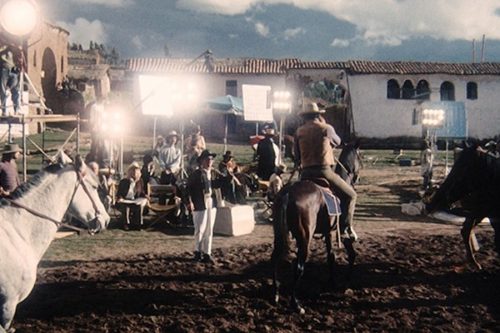 Fuller directs the movie within a movie

Universal, with a new program to finance young directors in the hopes they’d make something happenin’ for the youths, agreed to finance Hopper to the tune of one million and to give him final cut, the mad, wonderful fools. They were inspired by new, artist-run company BBS, which was busy financing Rafelson’s Five Easy Pieces and Bogdanovich’s The Last Picture Show (and which turned down The Last Movie (and by the way, The Last Picture Show and The Last Movie came out the same year…a big year for the end of cinema?)). It was a grand time to be young and on drugs and making movies.

Newly restored in a 4K digital print, and coming soon to blu-ray, The Last Movie is back. And you know what? It’s kind of great. If you like late ‘60s experimentation, if you think El Topo is a blast, if you find Hopper as mysteriously compelling as an actor as do I, you will find much to enjoy. Jodorowsky and El Topo is what came to my mind while watching The Last Movie, both its western-ish genre, its hazy feel, and non-linear editing. Turns out, after Hopper had been editing The Last Movie for something like a year in the Taos mansion/commune he was then living/partying/going insane in, Jodorowsky came by, saw Hopper’s then-final cut, told him no no no, and assembled his own cut. How much of the finished film is Hopper’s cut and how much Jodorowsky’s remains unknown, but given my reaction, I’m going to guess a few of Jodorowsky’s ideas remain. 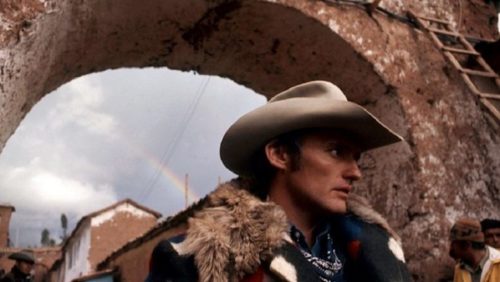 The story is something like this: A Hollywood western is being shot high up in the Andes of Peru (where in fact The Last Movie was shot, at 12,000 feet), a movie whose director is played by Sam Fuller and which features actor Kansas (Hopper) in some marginal role. After it wraps, the crew goes home, but Kansas remains, harboring dreams of starting his own production company in town and bringing in Hollywood money and stars to make movies. He shacks up with a local woman, parties with some irritating rich American tourists, etc.

Meanwhile, in the movie’s best conceit, the locals have been corrupted by Hollywood, such that they’re now imitating the shooting of their own movie. Only they have no equipment. Instead, they build replicas of cameras, booms, sets, etc. out of sticks and twine, hold late-night, fire-lit bacchanals, and send the local priest into a spiral of paranoia, imagining that they’re all losing their minds to the devils of cinema. It’s a movie-based cargo cult.

Kansas tries to set things straight. Sort of. Mostly he just gets roped into starring in the Peruvians’ “movie,” thus providing some amount of metaphorical Jesus-dying imagery and whatnot. Mostly whatnot, I think.

Also, a friend of Kansas’ says he’s found a gold mine and that, by gum, they’re gonna get rich! They do not get rich. 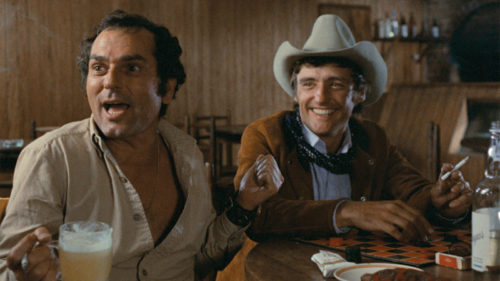 He knows how to find gold; he saw Treasure of the Sierra Madre

Think of this odd flick what you will, but one thing is certain: nobody makes movies like this anymore. No one experiments like they did in this beautiful cinematic era. Hopper, high as a Peruvian llama, said he was making the first American art film. He was not, but if he didn’t honestly believe it, he wouldn’t have made a movie half as interesting.

I wouldn’t say The Last Movie works, exactly. It’s full of ideas you can sense but not quite see, along with gorgeous cinematography by Laszlo Kovacs, good performances, and endless improvised dialogue. It’s something, this movie, something neither Hopper nor anyone else ever quite figured out. It feels like Hopper had a sense of what he was going for (the corrupting power of movies!), and to achieve it shot hours and hours of footage, assuming he would find the structure and meaning in the edit. Then, without a clear picture of an end point, he went mad putting the pieces together. It’s said at the last minute, he decided to open the movie with what was originally going to be the end: the gun battle of the film-within-the-film. Which kind of works! The end he finds is nice, too. 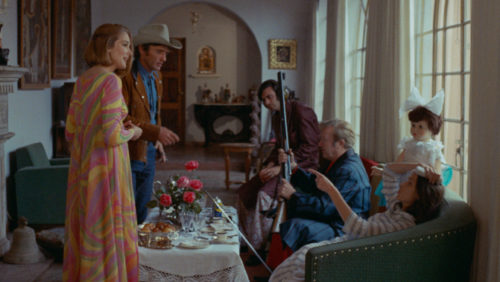 The post-production madhouse surrounding the editing was captured in a contemporaneous, not-quite-documentary by L.M. Kit Carson, The American Dreamer, the perfect companion piece to The Last Movie. In it, Hopper the man is never revealed; he’s always on, always acting, to the point that he’s credited as co-writer. Of an alleged documentary. Numerous scenes were staged. Hopper was very consciously creating a myth of the troubled, genius artist.

Maybe Hopper should have focused more on the Peruvians, who, having been corrupted by Hollywood, go mad making their own, imaginary, movie. There’s something very powerful about their faux-cameras and their obsession with “filming” a movie that’s never developed as deeply as it might have been. I imagine Herzog could make a hell of a movie with that idea at its core.

Hopper wouldn’t direct again until Out of the Blue in 1980 (another forgotten film, worth seeking out). He talked a lot of talk during the making of The Last Movie about how it would either cement his reputation as a genius or ruin him. Maybe he was seduced by ruin. It makes for a better story. 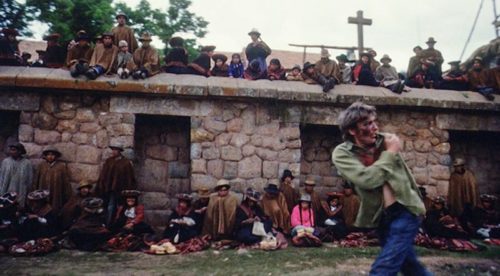