In these last two episodes of the short first season, Walt takes his first stab at becoming a somebody in the drug business. He comes by a new look, a new name, and a new meth recipe. But it doesn’t come easy. 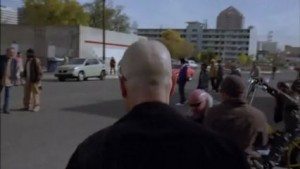 Episode 6 is grim. It begins with Walt and Jesse cooking again, intercut with brief flashes of what’s to come at episode’s end, including a final shot of Walt, bald and intense, walking away from the scene of–what, exactly? An explosion?

The trick of showing moments or full scenes from the future, then going back to see how they’re arrived at is often abused. It’s regularly used by crappy movies and TV shows as a crutch, as a way to say “Hey look! Something exciting is going to happen eventually, we promise! Now allow us to bore you for a bit until we get to it.” Breaking Bad uses the gambit for this very reason to begin its pilot episode, but to Vince Gilligan’s credit he pulls it off without it seeming cheap. The pilot is so good it doesn’t need a gambit. The flash-forward instead plays as a smart choice used for maximum effect. 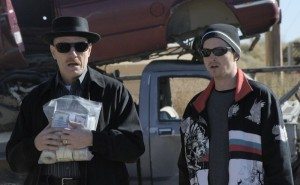 Walt and Jesse making money, at what cost?

Season 2 will use this method to even greater effect, stretching a mysterious future event across the whole season. Breaking Bad, instead of using the flash-forward as a crutch, internalizes it and makes it a part of the show’s style. It’s relied on less in seasons 3 and 4, but makes a big comeback in the opening scene of season 5.

Meanwhile, Walt undergoes chemo and attends a cancer support group with Skyler and Walter Jr., where Skyler laments Walt mysteriously disappearing for long afternoons. Walt says he likes to be alone. To go on walks. To appreciate nature. And to cook meth. Okay, he doesn’t admit to that last part.

He also teaches chemistry to bored high school kids, taking breaks to vomit in the bathroom. The chemo is taking its toll. He looks like hell. Kind janitor Hugo is happy to clean up after him and supply him with minty sticks of gum.

Walt can barely even cook the meth. Out in the hot desert he stumbles from the RV, ready to pass out. Jesse sees the shaved patch of Walt’s chest, and the black dot, and realizes Walt’s got cancer. Jesse’s aunt died of cancer, so he’s up on it, surprising Walt. This is their first bonding moment. It’s almost, but not quite, sweet, ending as Walt commands Jesse to finish the cook. 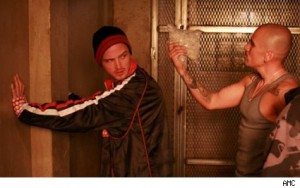 All sweetness vanishes when Jesse presents Walt with the proceeds of a night’s sales. $2600? And Jesse barely sold any of the ounce yet? That ain’t going to cover many medical bills. Problem is, Walt killed the distributor, Krazy-8. And they’ve got no in with the new guy, Tuco. Walt screams at Jesse insanely to figure it out.

That’s the thing with Walt. The guy is hard to love. He’s such a shit to Jesse. I mean his world is crumbling, he’s dying, and Jesse is a thickheaded dope, but still. Yet the show is stronger for how hard Walt is to love. You love him because of his flaws. You forgive him so much. Until, a few seasons down the road, you don’t.

Jesse finds an in to Tuco through his friend Skinny Pete. Jesse brings the whole ounce of meth with him, looking for money up front. Tuco proves to be a complete loon. He takes the meth, gives Jesse no money, and when Jesse complaints, beats the shit out of him. It’s not looking good.

Meanwhile, Hank traces the gas mask found in the desert to Walt’s high school, and we get the first of many scenes where Hank asks for Walt’s help in the investigation–the investigation that leads to Walt. There’s a lot of glass missing from the science room. Walt hems and haws and lies poorly, but not poorly enough for Hank to notice. Why would he? Walt’s just a meek chem teacher. 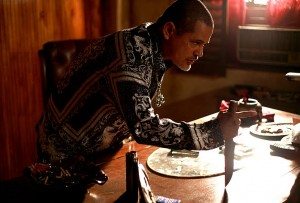 Tuco and his best friend

Who does Hank pin the theft on? Our friend the janitor, Hugo, a native American, who’s arrested in front of the school while raising the American flag up its pole. There’s some symbolism for you. Hugo is the first innocent victim of Walt’s descent into criminality. This is a big theme of the show. It’s what season 2 is all about. It represents one of the big lies Walt tells himself, that what he’s doing is all for himself and doesn’t affect anyone else. Hugo has some weed in his car, so he’s nabbed, is tossed in jail, and loses his job. Nice work, Walt.

Hank, Walt, Skyler, Marie, and Walter Jr. play poker. The hand comes down to Walt and Hank. Says Hank, “Looks like it’s you and me, buddy.” Yes it is. Or will be, finally, in the second half of season 5. Walt goes all in. “Are you hiding something?” asks Hank. Which okay, maybe it’s too spot-on, but what the hell. It works. Walt wins the hand bluffing.

The title of the episode is “Crazy Handful of Nothin,” (why not the line from Cool Hand Luke, “Sometimes nothin’ can be a real cool hand”?). It refers to the card game, to what happens at the end of the episode, and ultimately the show as a whole. Walt manages to bluff Hank over and over again, despite–or more likely because–Walt’s right in front of him. 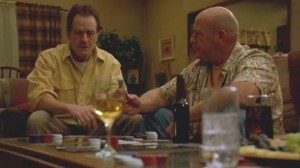 Walt visits Jesse, unconscious, in the hospital. Skinny Pete is there, says, “I didn’t catch your name.” What’s Walt’s name? The rest of the episode answers that question.

Cut to Walt in the shower. His hair is falling out. He stares in the bathroom mirror and it’s as sad a moment as we’ve seen of him. He picks up his electric razor.

Cut to breakfast with the family. He’s bald. Says not a word about it.

And cut to Tuco’s place. Walt marches in with what looks like another bag of meth. Gets in to see Tuco. Who’s still insane. He asks Walt what his name is. “Heisenberg,” says Walt. Walt demands the money for the meth Tuco stole from Jesse–plus $15,000 for Jesse’s pain and suffering. Tuco can’t believe his ears. How stupid could Walt be to bring him still more meth? Oh, it’s not meth, says Walt. He throws a chunk to the floor, and the place explodes. Fortunately, Tuco likes a crazy bastard. He gives Walt the money. Walt says he’ll have two pounds of meth every week. 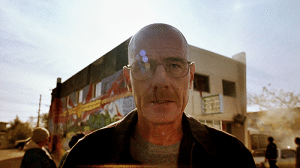 That’s his name, Skinny Pete. It’s Heisenberg. Walt goes from death’s door to badass in this episode. His other crazy handful of nothin’ is the fulminate of mercury he uses to trick Tuco. Outside, when the windows blow out from the explosion, glass rains down like it’s raining meth. Walt marches out, fifty grand in hand, and nobody messes with him. He’s Heisenberg, all right.

The show takes great care in relating images–like broken glass and meth–and colors, to the point where it’s hard to take notice without bringing yourself out of what’s happening dramatically. This episode is full of intense yellows, matching the chemo, Walt’s medicated urine, and smoke from the meth cook piling out of the RV. And reds as well, from background glass to jackets to blood.

Episode 7 is about the joys of illegal behavior. Walt gropes Skyler under the table at a PTA meeting (the parents are all freaked out about Hugo), then they screw in the car afterwards. Why’s it so good, asks Skyler. “Because it’s illegal.” 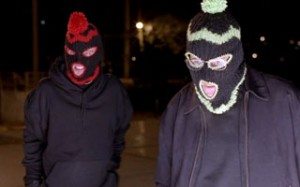 Out by the pool, Hank breaks out illegal Cuban cigars and Walt opines on the illogic of what’s legal and what’s not. And Marie, who we saw shoplifting earlier in the season, presents Skyler with a diamond baby tiara. Marie won’t fess up to her habit, even after Skyler is almost arrested when she tries to return the stolen tiara. Marie is yet another character on the show who gets a thrill from breaking the law. Later we learn that Hank knows all about her thieving. She’s in therapy for it. According to Hank, she just needs support, a bit of a different attitude than what he normally shows lawbreakers.

For the first time in the show, maybe in his whole life, Walt is powerful. He’s somebody. He’s Heisenberg. Jesse can’t believe Walt struck a deal with Tuco. The money convinces him. Problem is, there’s not enough cold medicine in the state to supply them with the amount of pseudoephedrine they’ll need. Tuco flips when Walt shows up with only half a pound. Yet Walt promises four pounds next time. Which scene takes place in a junkyard. Walt’s sporting a new hat for the occasion, the Heisenberg hat. He looks damn sharp.

How to make four pounds of meth? Walt comes up with a chemical work-around, a new recipe. Jesse’s able to get all the ingredients but one: methylamine. But he knows a place that’s got it. Walt makes thermite from old etch-a-sketch toys to blow the lock, and they rob the place. It’s a classic Breaking Bad scene. Intense and real, yet absurdly funny too. They trap the security guard in an outhouse, and not finding any convenient gallon jugs of methylamine, slowly roll out an entire barrel of the stuff. They’re the worst crooks ever, but in the real world, that’s often not a drawback. 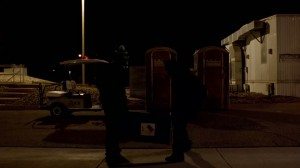 When Skyler tells Walt about Marie, he asks what she’d do if she found out Walt had done something illegal. “What would you do? Divorce me? Report me to the police?” She leans in close and says, “You don’t want to find out.” But you will, Walt.

At the meeting with Tuco, Walt presents four pounds of blue meth, blue due to the methylmine. Tuco is so happy that he beats unconscious one of his two henchmen with his fists, and drives away through the junkyard. Walt and Jesse are left with a bagful of money. 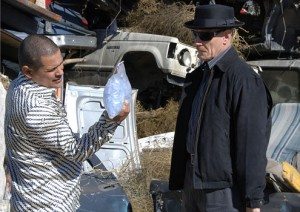 Tuco gets the first batch of blue meth

And so ends season 1. It’s a short journey Walt takes, one that presages his much longer, much more arduous journey to come. The themes of the show are all there, and the coming conflicts. It feels like an ending only in that the first stage is complete.