What does Walter White do next? He went crazy briefly, and look what happened. Two men died. What he does next is return to his life. It’s time to deal with his cancer for real.

Stepping back from the drama itself for a moment, the structure of this first, short season of Breaking Bad (seven episodes), is as smart as everything else about the show. The first three episodes are intense and wild and totally mesmerizing. When I recommend this show to people, I tell them, “Just rent the first DVD. There’s three episodes on it. If you’re not hooked after that, you should give up on filmed entertainment.” It hooks everyone. 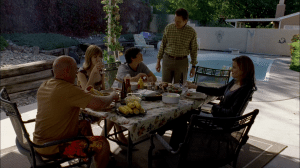 time to spill the beans, Walt

Think about how little we know of Walt at first. We think we know quite a bit about his present situation–fiftieth birthday, tired out, wife worrying over a $15 credit card charge, teaches high school and works at a car wash, his son respects his brother-in-law more than Walt, and finally: cancer–but we know nothing about his past. It works as a classic story. Once upon a time there was a man who…One day, he found out he had cancer…Because of that, he cooked up some meth…And because of that…

And so on. Imagine if the first episode started the same way, with the frantic, pantsless drive, then flashed back to 45 minutes of Walt’s life history, his missed opportunity at the company Gray Matter, the woman he once had a thing with, and so on and so forth. Do we need his whole backstory to be interested in him? Not at all. We only need a brief look at who he is. I’ve got a pet peeve with backstories told in full at the start of movies/TV shows. That’s not where they go. Breaking Bad understands this. 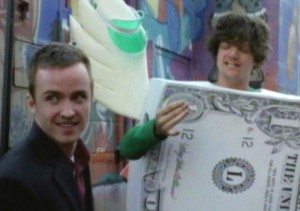 Episodes 4 and 5 dispense with meth almost completely, but for Jesse meeting up with old friend Badger and trying to cook a batch as good as Walt did. He can’t. No, these episodes are about cancer. They’re about Walt. Now is the time to dig more deeply into this tightly-wound man.

Episode 4 opens with Hank at work. Turns out Krazy-8 was a snitch. Now he’s missing. But in his car was a baggie full of the purest meth the DEA lab has ever seen. Says Hank, “I’m thinking Albuquerque might just have a new kingpin.” Cut to Walt, fat and shirtless. Hank’s wrong, of course. At least now he is. As of the close of season 5’s first half, he’ll be right. This show always knew where it was headed.

But back to cancer. Walt’s told Skylar. We can see it in how she looks at him. He tells the rest of the family. Hank generously says to Walt, “I’ll always take care of your family,” and we see Walt simmer. Nothing is in his hands. He has no control. Everything is being taken away from him. 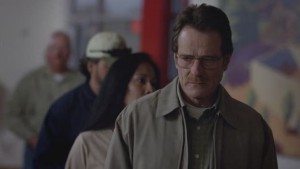 After seeing an incredibly expensive doctor for a second opinion, Walt decides not to go through with the chemo. As he tells Skylar, he can’t saddle her and Walter Jr. with that kind of debt should he not make it. She can’t believe he’s saying this. He assures her it’s the right thing. Walter Jr., overhearing them, yells out the most devastating thing imaginable: “Why don’t you just fucking die already?”

Later in these episodes Skylar has everyone sit down to tell Walt how they feel about his choice not to go through with chemo. It’s a tough scene. At the end, Walt’s allowed to speak. He says he feels as though he’s never in his entire life chosen anything. His whole life has been beyond his control. Nothing has ever been his own choice. So with cancer, he’s going to make his own choice. He’s not going to spend his last days too weak to engage with those he loves. This just about destroys Skylar.

Skylar has the talking pillow

The next morning Walt lies in bed thinking. Finally he goes to Skylar and says he’ll do it. Cut to Walt at Jesse’s house. “Do you want to cook?” he says. Walt’s going to have control of something, all right.

But we’re getting ahead of ourselves. That’s how episode 5 ends. Two full episodes of cancer and Walt’s past before finally returning to the idea of cooking meth.

What about Walt’s past? Here the show does something so smart it’s likely to escape notice at first. This is a show about a man who needs money for his cancer treatment and to provide for his family should he die. He needs the money so badly he’ll do anything to get it, even cook and sell meth. Now that’s not so hard to set up. It’s exactly what the show lays out in the first three episodes. The Whites barely have enough money to get by on. Doing something extreme is a believeable option for Walt. 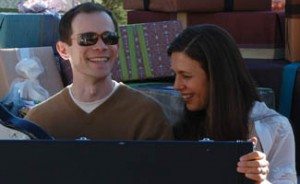 Elliot and Gretchen, keys to Walt’s past

But the writers are not interested in simple solutions. Walt and Skylar go to a party at the house of his old college friend and co-worker, Elliot and his wife Gretchen, the woman Walter flirted with in episode 3’s flashback. Elliot and Gretchen are wildly rich. Elliot’s the one who won the Nobel for his work in chemistry. We learn from people at the party that Walt started the company Gray Matter with Elliot. Someone asks Walt if he’s the co-owner. Walt says no, he decided to go into education. “What university?”

Elliot offers Walt a job, mentioning the fantastic healthcare package. At which point Walt realizes Skylar told him about the cancer; he’s being offered a hand-out. Outside the party he reveals to Skylar that Elliot further offered to outright pay for his treatment. Walt turned him down. Skylar is once again outraged and confused. She understands pride, but this is too much.

Gretchen calls Walt, almost in tears. She says as far and she and Elliot are concerned, the money is already Walt’s, for the work he once did for Gray Matter. She asks if his refusal has anything to do with “us.” So she and Walt had something in their past. Walt lies, says it turns out his insurance came through. He can pay for it after all. He hangs up. And goes to see Jesse, as above. 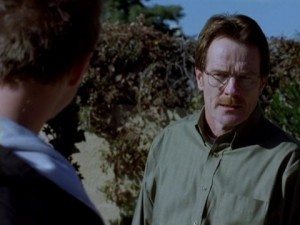 By not taking the easy way out, by providing Walt with this totally unlikely option of having everything paid for, the writers have forced themselves to create a much deeper and more complex character in Walter White. What must have happened with Gretchen and at Gray Matter for Walt not to take the money? Pride is a big part of it. Walt wants control of his life, for once in his life. But it’s more than that. Something bigger is going on with his past here. We begin to understand that Walt’s need is a deep one. A need for control, a need to own something, to be in charge of something, for the first time in his life. At first glance you’d think Walt’s obstinacy would make it harder to get behind him, to root for him. If he was outright desperate, with no other options, sure we’d be on his side, no questions asked. But think about it more, and you realize Walt’s depth as a character makes us pull for him even more. He’s very far from an innocent here. But his refusal to give up control of his life as it seems to be ending makes him that much more sympathetic.

At least right now it does. 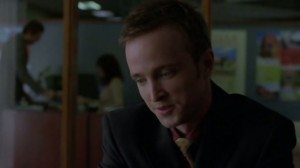 Jesse looks for a real job, finds Badger instead

Speaking of pasts, these episodes also delve into Jesse’s. Strung out on Walt’s supermeth, Jesse stumbles to his family’s house. His mom and dad allow him to stay, but Jesse’s clearly got a druggy past, and they’re reticent. Jesse has a little brother, Jake, maybe 12 or so. He’s a genius with tons of awards, who plays multiple musical intruments. The opposite of Jesse, it seems. But the most telling line comes when Jesse, trying to connect, points out the obvious, that Jake’s the favorite son. “Yeah, right,” says Jake, busy on his computer. “You’re all they ever talk about.”

At night, Jesse goes through a notebook full of old drawings. In it there’s a cartoon of chem teacher Mr. White with a beaker sticking out of his ass. On the opposite side is the test Jesse failed, and Walt’s angry words in red pen: “Ridiculous! Apply yourself!”

When the housecleaner finds a joint hidden in a plant, Jesse’s parents are crushed. He says it’s not his, but they’re tired of his lying and kick him out. Turns out the joint was Jake’s. 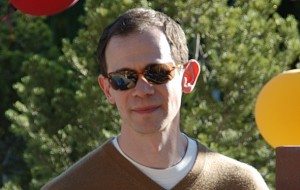 Getting back to the intelligence of how this season is structured, here we have two hours essentially of character background set against the grim reality of cancer and drug abuse and how they both tear apart and bring together families. That’s a bold move for a  show ostensibly about the wild world of meth cooks. It works because of the first three episodes. They hook you. You will follow the show anywhere. And as episode 5 ends, you know the meth cooking is about to make a return.

Speaking of episode endings, episode 4 ends with a minor act of defiance. Walt runs into some bluetooth wearing young rich prick at the bank. Guy snags Walt’s parking spot. In the final scene, Walt sees the same guy at a gas station. Walt shorts out the guy’s car battery and walks away as it catches fire behind him. Walt’s no criminal mastermind yet, but he’s full of a pent-up need for power. 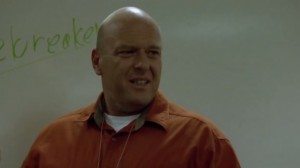 Because I didn’t get to it in the initial write-up, now’s a good time to mention the obvious about Breaking Bad: the performance are as good as they come. Bryan Cranston as Walt is one of the most compelling characters ever put on television. I knew there was something special about him when he played the nutty father on the comedy Malcolm In The Middle. But who knew he had Walter White inside of him? As for Aaron Paul as Jesse, he’s outshone only by Cranston (as is everyone else). His Jesse is a tragic figure. It’s heartbreaking what happens to him. He’s such a good guy inside. I hate to think what’s going to happen to Jesse in the end.

One last note, about my other favorite character, the swimming pool. Jesse comes to see Walt, to talk about what happened. Walt is outraged. He never wants to see Jesse again. Pissed off, Jesse, who came with Walt’s cut of the money made from selling off the supermeth, tosses the cash into the pool. Walt grabs the poolnet to fish it out. That’s it. The pool’s starring role begins in season 2…