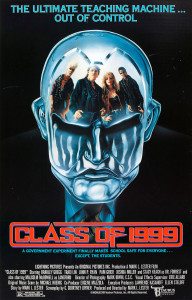 High school. What could be worse? Unless you’re the coolest kid in school, or partying with prostitutes, or working for the feds, high school is a gang-ridden hell-hole of inappropriate sexual behavior, attempted rape, and Ron Howard. The only way it could be worse is if your teachers were evil, Terminator-like cyborgs intent on destroying you.

Set in a distant future where nobody is partying, Class of 1999 cribs Escape From New York’s opening graphics and explanation of a world gone mad, but instead of explaining how Manhattan has been turned into a prison island, it describes the “free fire zones” encircling high schools, in which no police dare set foot and gangs run wild.

If you find yourself wondering why high schools would still exist in such a context, you should not be watching Class of 1999. Instead of using your precious “logic” to uncover plot holes, you should marvel at Stacey Keach’s bleached white mullet and eerie albino eyes. He plays Dr. Forest, and in a scene borrowed from RoboCop, shows off to the board of directors of—um, high schools? or something?—his new teacherbots, three cyborgs, or “tactical education units,” ready to take on those dastardly teens and teach the bloody hell out of them! One teacherbot is Pam Grier, another is John P. Ryan (of Runaway Train fame), and the other is some other guy. Dr. Langford (Malcolm McDowell), principal of Kennedy High School in Seattle, thinks the teacherbot plan is a winner and signs them up. 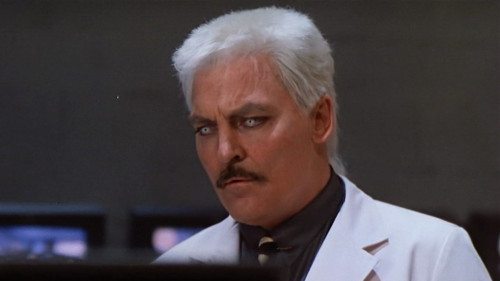 Definitely a man you can trust

Meanwhile, young punk Cody Culp (Bradley Gregg) is released from prison and heads back to high school, where is former gang buddies want him back in the fold. Cody isn’t interested. He just wants to learn, and to hit on princial Langford’s hot good-girl daughter, Christy (Traci Lind). Christy digs this one-time bad-boy, and when he saves her from being raped, she likes him even more.

Their relationship might have had a chance to blossom if not for the teacherbots. Seems their ideas of discipline are becoming a bit harsh. John P. Ryan robotically spanks the asses off of two bad boys, and other-guy teacherbot breaks a kid’s neck just for pointing a gun at him. It’s high school, teacherbot! Kids are going to shoot at you! Jeez. 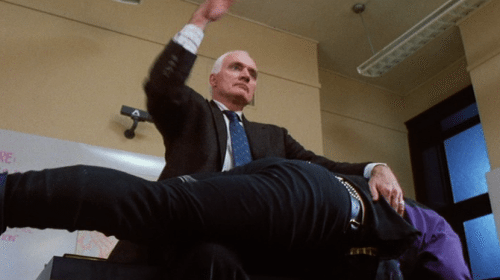 The kids aren’t so keen on this new, deadly teaching regime, but alas, the teacherbots decide that discipline of a harsh nature is the only solution. It’s up to the kids to fight back and win their freedom. I’m pretty sure that’s it for the story. It was late at night, after all, and the details have already grown hazy. I do recall a nice scene of a teacherbot’s head exploding.

Sad to say, Class of 1999 is no Class of 1984. The original, though totally outrageous, spoke to real (albeit comicly overblown) fears of kids running wild. It came into being because of those fears. I have to believe Lester modeled it on the ’55 Blackboard Jungle to show that while times change, fears of the young’uns running wild don’t.

Class of 1999 exists because the first movie made money and because it must have amused Lester to work Terminator tropes into his high school flick. The future it depicts is about as believeable as, say, Demolition Man, or really any early ‘90s sci-fi, in which everyone wears a lot of big-shouldered, red leather jackets and paints stripes in their hair.

This is not to say Class of 1999 isn’t entertaining. Lester may be making trash, but he revels in it. 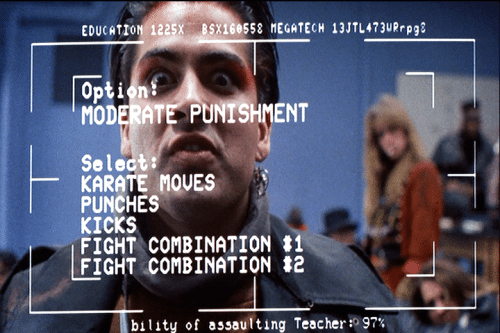