Nowadays it’s common knowledge that the monsters living on Mars are far from humanoid in shape. We know they live inside the planet, hiding from the eyes behind our telescopes, patiently awaiting the right moment to invade. H.G. Wells explained the most likely invasion scenario in his novel The War of The Worlds, made into two movies, one a classic of ‘50s sci-fi, the other an exceptionally laughable Steven Spielberg/Tom Cruise vehicle from 2005. 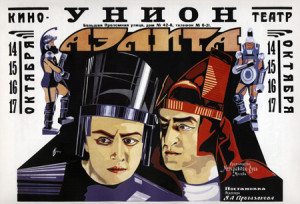 Despite Wells’s prescience in all matters futurological, the Russians, or more exactly, the Soviets of the ‘20s, had their own ideas of who lived on Mars and what they were up to. They were up to being oppressed, as it turns out, and in need of a popular uprising. Who better to lead it than an attractive Soviet earth-man?

Director Yakov Protazanov’s Aelita: Queen of Mars (’24) is one of the earliest movies about space travel. The novel it’s based on, written by Alexei Tolstoy, is one of the first Soviet science fiction stories. Its Martian sets and costumes come from the then current and hugely influential constructivist school of art, and were designed by Aleksandra Ekster. Visually, the movie’s a winner. As for everything else, I’m afraid it’s a bit of a snooze. 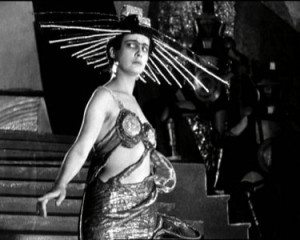 Only a year later, Eisenstein’s The Battleship Potemkin would open, so you’d think the Soviets might have had a handle on the art of editing. Then again, maybe Eistenstein was too busy inventing that art to help out the makers of Aelita, the editing of which, to be generous, I will call “hopeful.” As in, they were hopeful the scenes they cut together would make any sort of narrative sense. Sometimes they do. Most of the time you’re best off not worrying about it, and just soaking in the general vibe.

Alas, most of Aelita is set on earth, where numerous characters seem to be having relationship issues I never had it in me to care about, nor, much of the time, comprehend. I like old movies, and I love old science fiction. I even got into Fritz Lang’s outrageously long Woman In The Moon. Aelita took more effort than I had to give. 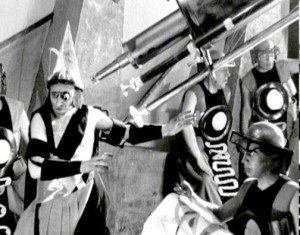 The Martian scenes are what make it worthwhile. The sets and costumes are striking. Cheap, yes, but fun to look at. Especially Aelita’s wonderful hat. The Martian soldiers reminded me of the programs in Tron, but without the colorful neon.

Aelita spends her time looking through the secret, newly invented telescope at the peoples of earth swarming around, doing their earthly things. She spots one man in particular, Los, who, when not embroiled in matters romantic, is building a rocketship and dreaming about Mars. In fact it’s not entirely clear that what’s going on up on Mars isn’t just inside Los’s head. He gets even more worked up once he maybe shoots his girlfriend, Natasha, whom he believes is cheating on him. 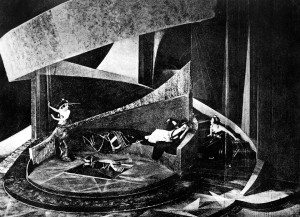 Eventually he flies his ship to the red planet with a few comrades, including the very detective assigned to figure out what happened to Natasha. Of all the luck! Once arrived on Mars, Los and Aelita kiss. She saw Los kiss Natasha once through the telescope and has been obsessed with the earthpeople lip-touching-ritual ever since, even trying it out on a Martian.

The other earth passenger is a Bolshevik soldier. He delivers a speech to the oppressed Martians and begins a revolt. Workers of the universe unite!

Aelita is not pleased. She orders the troops to open fire on the revolutionaries, because not only is she the monarch, but even worse, she’s a woman, and as Los knows all too well, women are deceitful. Los struggles with her at the top of a staircase–suddenly he sees her as Natasha!–and then, well, he does what any man would do in his place. He solves the problem.

The movie begins with every country on earth picking up a strange signal from Mars, three mysterious words: Anta…Odeli…Uta. When it ends, the secret of those words is revealed on a poster reading: “The only tyres worth your money are Anta Odeli Uta.” The secret message was only a commercial.

Aelita is historically interesting, especially if you’ve got a thing for the early history of Soviet communism and art. Story-wise, it’s awfully tiring. In terms of early sci-fi, Georges Méliès’s fifteen minute Le Voyage dans la Luna, from 1902, is a much more entertaining movie, and won’t take you nearly as long to watch. 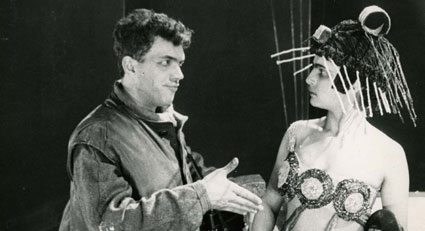