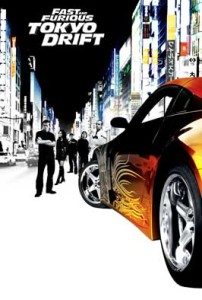 Therefore, you should watch half of it. I recommend only the top half. Or the bits you can catch while blinking continuously. Or maybe you should just eat the DVD while you hang out with the guys at the Gas & Sip?

All would be reasonable choices where this film is concerned.

The good news is that after John Singleton’s uninspired foray into the world of illegal street racing in 2 Fast, director Justin Lin gets the steering wheel for Tokyo Drift, the third in the series. Lin, who previously made the enjoyable Better Luck Tomorrow, is a much better director. He does not appear to be working from a set of storyboards he found in an old Hustler magazine that was decomposing in the woods behind the school. His style is bright and snappy. He has the ability to recognize human beings as conscious creatures, even if his cast makes that challenging.

That pretty much does it for the good news.

The Fast and the Furious: Tokyo Drift begins in one of those high schools where everyone has been held back seven years and looks old enough to have prostate problems. Chief among these students is Sean (Lucas Black), a good ol’ boy gearhead whom I deludedly hoped would grow, after a brief prologue, into Paul Walker’s O’Conner character* — a character whose first name I could not think of a reason to bother trying to recall.

This is my facial expression. Get used to it.

No such luck. Sean doesn’t grow up into O’Conner or anyone else.

Instead, our protagonist establishes his deeply rooted character traits by speaking with an Alabama accent, ignoring the petty torture of a fat kid, and not backing down from a fight with some football player douche (Zachery Ty Brian). Naturally, this fight needs to be settled by racing in competition for the sexual attentions of a short-skirted minx (Nikki Griffin).

Lin manages all of this set up well, despite the poverty of acting skill on display. In terms of pacing and visual flair, this installment is a high-water mark for the Fast and the Furious series thus far. Lin’s sense for what engages becomes even more evident during the opening race, which — despite being launched by a pink brassiere — seems to involve real cars going real fast. Not the CGI malarkey of 2 Fast 2 Furious.

Then, in a moment of tragedy, there is a ghastly crash. The script, already lagging behind, spins horribly out of control. It rolls and burns, leaving logic smoldering into a pile of greasy ash. This disaster is mirrored in the movie, when some cars get all denty (or al dente in Italian).

Somehow Sean escapes prosecution for destroying a swath of whatever state they’re in by leaving the country legally. His mom must be a great lawyer. Sean does not, to my dismay, grow up into O’Conner. He remains Sean, only now he’s Sean-in-Japan, where, despite not speaking any Japanese, he attends a Japanese school and lives in his father’s broom cupboard like a bulked up Harry Potter.

Sean instantly finds his way into the underground racing culture. This scene is peopled by women who cannot afford pants and boys who can afford to throw away automobiles that cost more than Uruguay.

Sean pisses off the ‘Drift King’, Takashi (Brian Tee), by speaking to Takashi’s Australian model schoolgirl/girlfriend/sister Neela (Nathalie Kelley). He is — naturally — forced by his bullheadedness into repeating practically verbatim the only sequence of note we’ve seen from this pathetic story so far.

That’s right. A race! Over a girl! I wonder how it will end? 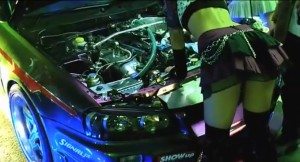 Oh, I see what’s wrong. Your skirt is too long and your alternator is the wrong color.

Han (Sung Kang), is Takashi’s business partner who doesn’t seem to like Takashi, and this dude lends Sean a vastly expensive and prized automobile so Sean can repeatedly drive it into a wall and other cars at high speeds. Thus humiliated and approximately a billion dollars in debt to Han, Sean is forced to remain in this terrible, terrible movie — as, unfortunately, are we.

If all that sounds complicated, it’s because it is.

Sensible things that people do in other, better written films — these are easy to summarize, i.e. ‘Our hero tries to stop the giant spiders from eating people because being eaten is bad,’ or ‘She steals the diamonds so that she might trade them for gummy bears.’ In Tokyo Drift, it’s hard to explain or understand what the hell is going on. Every single scene competes to be stupiderest. Does Han care about his car being wrecked or not? If the money is not important to him, why is he bothering to steal it from Takeshi and risk the wrath of Takeshi’s Yakuza uncle (Sonny Chiba)?

My anger, the script says I have it.

The answer is: who cares. The Fast and the Furious: Tokyo Drift quickly deteriorates into a collection of pointless scenes with terrible actors fighting over dumb things. If any of these characters has a motivation, it is indiscernible. Nothing anyone does is any more believable than these cars playing demolition derby without getting scratched or dirty.

Then we get yet another race over a girl. I wonder how it will end?

Justin Lin cannot save this turd with all the colors in his rainbow. Even the shapely females wriggling provocatively fail to engage — perhaps because Nathalie Kelley looks as much like a high school girl as I do. Oh, for a few scenes with Michelle Rodriguez!

By the time you’ve woken up to the fact that this film can’t pull out of its deadly skid, it’s far too late. You’ve watched the whole thing. There is, however, one, brief silver lining: 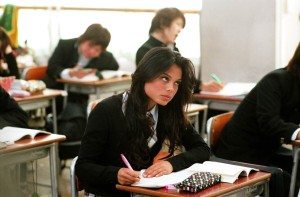 Seven years of high school down the drain.

It is truly a sad state of affairs when 12 seconds of Vin Diesel is the best thing your film has to offer.

I would like to conclude by saying a few good things about The Fast and the Furious: Tokyo Drift, but honesty is cruel mistress. This is an insipid film. The fact that its writer Chris Morgan has gone on to script all of the subsequent Fast and the Furious films does not bode well for them or us.

It’s hard to believe, but true: after Tokyo Drift I am looking forward to films with more Vin Diesel and Paul Walker.

That may be the saddest sentence I have ever written.

* Because Paul Walker does not appear in this film, I do not feel obliged to mention that he recently died in a car accident caused by reckless driving. Oops. I guess I just did. Forget it, then.

4 responses on “The Fast and the Furious: Tokyo Drift Off to Sleep”