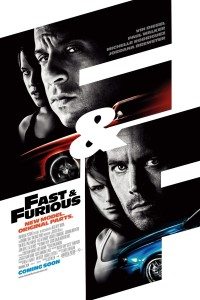 It is impossible to deny. After The Fast and the Furious, 2 Fast 2 Furious, and Tres Fast Tres Furious, Fast & Furious is unquestionably the fourth film in this series of auto-racing movies of unambitious quality.

One could argue that Fast & Furious only got released fourth — that it’s really the third film chronologically. To this point I would counter with the sensible words of MC Frontalot: “Do shut ups, Poindexter.”

For an ability to do math and/or keep track of temporal reality is wholly unnecessary when watching Fast & Furious. Not only are these talents superfluous, but they may actually hinder you in your attempts to digest this overly rich pate of ultra-stupid man gristle.

Here’s what you need to know about Fast & Furious Four Real:

After The Fast and the Furious: Tokyo Drift — which was just about as terrible as a film can be — Fast & Furious Four Real looks deep within itself to find its essence. It rips away its snap-on pants so it can display its bespangled undergarments and rotate provocatively. And it does this very seriously.

As the poster’s tagline says:

They aren’t kidding. The film isn’t a joke. It understands that the series has let you down of late and it’s going to make it up to you by repeating everything you’ve seen in films 1, 2, and 3, but like, you guys, this time for real. 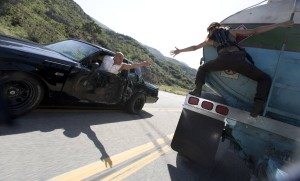 Take the opening action set piece. In the original The Fast and the Furious, we saw Toretto (Vin Diesel) and Letty (Michelle Rodriguez) hijacking trucks by climbing up on the hoods of speeding muscle cars and harnessing the power of exceptionally poor dialogue. They do much the same in Fast & Furious, only this time with a couple of Latino gentlemen, Han (Sung Kang) from Tres Fast, and a woman we never meet.

Their daring plan involves filching four tankers full of gasoline from a moving land train while it travels downhill towards a cliff. To accomplish this, they’ll use liquid nitrogen, a hammer, and acting. This gasoline is valuable because it can be used to race cars illegally; ergo, it is part of the circle of life.

Justin Lin, who directed Tokyo Drift, retains control in this fourth installment. Again he favors saturated colors, crisp lighting, and un-ironic intensity. Stealing gasoline from a moving semi driven by some poor mope who’d likely pull over if offered a nice meal is important stuff. It’s worth risking everyone’s life for, but not worth enough to wait until the truck stops and the driver gets a sandwich and probably leaves the cab unlocked.

As far as F&F action sequences go, this one’s hot. Moronic, but exciting. By the time Letty drops her hammer, forcing Toretto to spin out on a two-lane rustic, cliffside highway so he can slam and shatter the semi’s hitch with his bumper without losing speed and continuing — now in reverse — to keep pace with the truck barreling along at full throttle, you most definitely have either suspended your disbelief or had it expelled and sent to an unpleasant military school.

No problem. I was always great at Frogger.

Having lost all his gasoline and control, the semi driver jumps out of his cab, allowing the truck to topple and roll towards Toretto and Letty as it bursts into flame. Luckily, Toretto has a magic car, an advanced grasp of physics, and the timing of an atomic clock.

You will be shocked to learn that they do not perish in this, the opening action sequence.

Where The Fast and the Furious made the mistake of making its characters — Mia (Jordana Brewster), for example — look human and natural, Fast & Furious corrects that oversight. There is, seriously, a special spotlight just for the sleeping Michelle Rodrigeuz’ mouth. Toretto was an excellent driver when we first met him. Now he can pick a lock using his muffler while driving across a lightning bolt, steering with his eyelashes.

And then there is bad news. Michelle Rodriguez’s character Letty gets herself killed in order to provide Fast & Furious with a plot. By any estimation, this is an exceptionally poor trade. Rodrigeuz added a soupcon of class to the franchise, but now that is gone. Instead, we get Israeli actress Gal Gadot who, yes, is lovely but who, no, doesn’t quite match Rodrigeuz’ skill in keeping the story from testosterone overload.

If it’s Thursday, I must be in law enforcement.

Toretto returns to Los Angeles where he doesn’t quite team up with O’Conner (Paul Walker), who is killing time working for the F.B.I. Together, sort of, they attempt to track down the drug dealer who had Letty killed in a scenario identical to that of 2 Fast 2 Furious, only this time, like, for real you guys. They even have the same illegal street race to gain spots on the dastardly dealer’s crew.

No one jumps their car onto a boat, though, which is a pity. Instead, they use their magic GPS devices to get across Los Angeles in under half an hour. 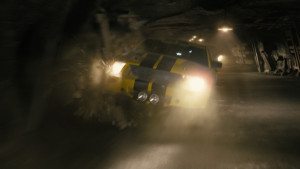 Everything in the border mine is painfully fake looking.

In Fast & Furious, the drug dealer (John Ortiz) is smuggling high quantities of heroin using speed-demon mules who drive as fast as possible across the border, through a batcave of mining tunnels, in the 45 seconds between when someone says the border patrol isn’t looking and when they decide they are once again looking. It is very important to drive as fast as possible through the tunnels because there will never be another opportunity to get across until the next opportunity and, presumably, all the opportunities after that. Then, all the drivers get murdered because people willing and able to drive 120 mph through unpaved mining tunnels across the border carrying $60 million in heroin are easy to come by, but trust, man, whew. Don’t even get me started.

Anyway. Stuff happens. Toretto punches O’Conner a lot, for which everyone is grateful. Michelle Rodrigeuz remains dead, which sucks as she could actually make a meaningful facial expression and stare down Vin Diesel. Justin Lin continues on in his Michael Bay-lite style that’s rich in crane moves and dramatic sunsets and stuff like that. 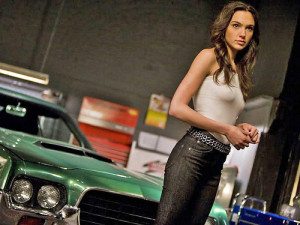 Gal Gadot may be Wonder Woman but she’ll never be Lynda Carter.

Then, you won’t believe how it ends, you guys. Everyone dies when the car they’re in loses control going too fast and they slam into a light pole.

That’s how Paul Walker’s life ended last year, not Fast & Furious. I get confused sometimes. These films are so life-like.

The film ends with Toretto doing the right thing but still being sent to prison by one of those asshole law enforcement types. Guess they’ll have to break him out using the same technique they developed to steal stereos in Bakersfield.

Fast & Furious is far from the worst film in this series. It moves along at a nice clip. It looks like a Transformers film without any actual Transformers in it or, what would be worse, Shia LaBeouf. Everything is consistently stupid which is lulling.

I guess I’ll watch the next one. C’mon over Poindexters, if you can do shut ups for long enoughs.