Planning for movie trilogies is a modern phenomenon. In the olden days, nobody planned for anything. You hoped for success. If you lucked out and found it, maybe you made a sequel. If you did, you spent half as much money on it as you did the original and hoped for a fraction of the original’s success, which if found, maybe you rolled the dice and made the exact same movie a third time. And by “olden days” I’m talking about the ‘80s. Before the ‘80s sequels were rare. The Godfather Part II was the first one to just use the same name with a “2” appended to it. Following which came the boldly named Airport 1975, and Superman II, and so on and on and on. 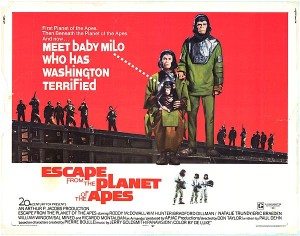 Before The Godfather Part II sequels had their own names. Like From Russia With Love, or A Shot In The Dark, or Magnum Force. The Planet of The Apes producer Arthur P. Jacobs didn’t care to risk using such potentially confusing naming conventions for his series. Wisely, he kept the name of the first movie in all of its sequels, going for a classic serialized vibe. Also wisely, in terms of his bottom line, he spent less on each successive sequel, figuring, one must assume, that having hooked his audience, they’d come back for more no matter how cheap the product.

In the case of the third Apes movie, Escape From The Planet of The Apes, the product could not have been cheaper, although to be fair, every dollar of the budget is there on screen. All seven dollars and thirty-four cents of it. I’m sorry, what? The budget was $2,500,000? Shut the front door! Someone better check how many Ferraris Mr. Jacobs bought—before the movie’s release. 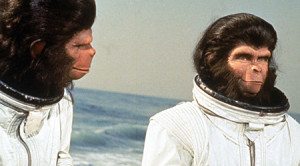 Escape From The Planet of The Apes is an absolute marvel. It’s so marvelously bad you can’t watch it without saying, “What?” every five minutes, so devoid is it of anything that makes sense, to the point where you realize that making sense simply wasn’t on anyone’s agenda. I wish I could say it was as enjoyably bad as Beneath The Planet of The Apes, but it is not. What Beneath is to the original, Escape is to Beneath.

Jacobs always knew he wanted more Apes sequels. Did that stop him from blowing up the Earth and everyone on it in Beneath? Certainly not! That was a jim-dandy ending. What to do for the sequel? Not his problem. He told Paul Dehn, writer of Beneath, to come up with something. More important: he told him to come up with something now. Dehn did not disappoint in terms of speed. Escape opened a year after Beneath.

It begins on present day (i.e. ’71) Earth, with a spaceship found floating in the ocean. This is of course Taylor’s ship from the original movie. And who should emerge when the army drags it ashore? Chimp astronauts! Egads! Fetch me some oranges, M. Emmet Walsh, and get these apes to the zoo.

M. Emmet and the army guys get a gander at the wacky chimps

The chimps are Zira (Kim Hunter), Cornelius (Roddy McDowell, back after missing Beneath), and Milo (Sal Mineo, in a desperate bid to re-ignite his fading career; it would be his last movie role). They’re brought to the L.A. Zoo and put into a cage adjacent to a man wearing what looks like a five-year-old’s gorilla suit class project (grade: C+). They don’t speak to any of the humans at first, because they’re sneaky like that.

A pair of animal psychologists, Lewis (Bradford Dillman) and Stephanie (Natalie Trundy, who played a mutant human in Beneath, and a chimp in the next two Apes movies, despite her evident inability to act (might have helped that she was married to Arthur Jacobs)), come to test them. Zira proves to be rather smart in a scene that might have worked if the psychologists expressed anything like real surprise that chimps wear clothes and walk and talk and proclaim themselves scientists. Instead they take it all in stride, just one of those things. They listen with great understanding as Zira tells their sad tale. It plays like an episode of Gilligan’s Island.

Natalie Trundy may have only one expression, but you must admit she’s mastered it.

Their story? Seems the pacifist chimps, having seen the gorillas go off to fight a war against whoever was hiding out in the Forbidden Zone, pulled Taylor’s spaceship out of the lake, repaired it, and set it on a reverse course through whatever time anomaly sent Taylor to the future, arriving in Earth’s past just two years after Taylor left.

The chimps are brought before a Presidential Commission and interviewed. Well, all but for Milo, who’s killed by the gorilla—who sticks his burly arm through the bars of his cage and throttles him—while Zira and Cornelius watch, horrified. Mightn’t they have aided Milo? Say, pulled the gorilla’s arm off of him? Not in this movie. 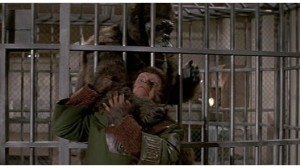 The gorilla suit attacks. If only someone would pull his arm off.

The Commission scene is played for laughs. I think. So are all of the preceding scenes. Nobody seems the least bit surprised about talking apes having come into possession of Taylor’s spaceship and flown it from—somewhere. Zira and Cornelius at first don’t mention that they knew Taylor or that they saw the Earth blow up as they flew away.

In fact, that talking apes exist in the first place doesn’t faze a soul. In short order, everybody loves them. Zira and Cornelius are brought to fancy stores and dressed in human clothes and taken to a fancy hotel, there to marvel at their lavish room. They go to ritzy parties. They’re the talk of the town. Why does this massive city and all it contains not surprise them in the least? That is a very good question.

Cornelius gets his party on

These scenes are so tone deaf they travel beyond tones. Is there a tone to this movie? Its tone shifts not only between every scene, but within scenes. It’s like a seriously played TV farce you’re not supposed to laugh at except when you are, which is all the time.

Did I mention that Ricardo Montalban plays Armando, a flamboyant circus impressario? Oh my, does he ever. 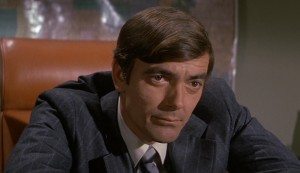 I’m getting ahead of myself. That Zira and Cornelius have been holding out info—they knew Taylor, they’re from Earth’s future, they saw the Earth blow up—causes trouble. Dr. Otto Hasslein (Eric Braedon), who speaks with a slight German accent, just enough to peg him as evil, suspects these chimps are trouble, particularly when he finds out that Zira is pregnant.

Hasslein lays it out for the President: if Zira’s baby mates with a normal chimp, their offspring might be able to talk, and from there, then what? Ape revolution, and the very future from which Zira and Cornelius have returned. This is actually a nice bit of time travel fun right here, the idea that Zira and Cornelius are themselves responsible for their ancestors. Time as a loop with no beginning nor end, the future creating itself in its past.

Too bad it’s not actually stated as such. It’s glossed over with Hasslein spewing some total scientific gibberish which suggests Zira and Cornelius came from a different possible future, meaning the ape revolution Hasslein fears won’t be the same one that creates Zira and Cornelius, but an entirely separate one here on this version of Earth, one that might therefore be prevented. 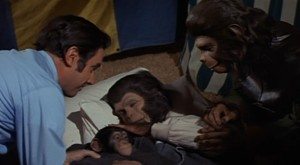 Prevented how? By killing the unborn child. Hasslein gets the Commission to agree with him: they’ll let Zira and Cornelius live in peace, but their child must be killed.

Z & C go on the run, aided by Lewis and Stephanie, who bring them to Armando’s circus. Ricardo Montalban is a needed dose of high energy acting. Imagine if he’d had Heston to play off of. Armando loves animals, he loves chimps, he’s happy to hide to fugitives. At which point Zira gives birth. But lo! The cops are on to the circus plot, Z & C are on the run again—but not before Zira requests a moment alone with a normal chimp and that chimp’s new baby. Hmm, do I smell a baby switch?

Off they go to—where else?—an abandoned ship in the L.A. harbor. Hasslein shows up with a gun. The army shows up moments later. Running, yelling, shooting! And, the tone going from ridiculous non-comedy to grim death-orgy, Hasslein pumps bullet after bullet into Zira and the baby chimp, Cornelius shoots Hasslein, and the army shoots Cornelius. Yay! Everybody’s dead!

Or are they? Cut to Armando’s circus and a certain baby chimp—who speaks!

I admit, having written what I’ve just written, Escape From The Planet of The Apes sounds like maybe the best movie of all time. I wish it were. It’s hard to describe how inept this movie is without going into the smallest details. Like the editing. Oh man. Or just basic logic.

One example. Late in the movie, Z & C on the run to the ship, Zira pauses, the baby cries, and for no reason at all she leaves her handbag at the base of a small, unused oil derrick. Next day, Hasslein and a swarm of cops are there checking out the bag. Because some oilmen found it. That’s right. An oilman found a handbag with some clothes in it. So he called the cops. Which cops called the army. Who contacted Hasslein. This is the most sensible logic chain in the whole movie.

Our heroes get the third degree

It’s hard to believe anyone spent more than five minutes doing their job on Escape. Jerry Goldsmith, whose score for the original is so out-there and wonderful, returns for Escape, but I’m pretty sure he composed the music on his lunch break.

The acting is best described as comatose, with the obvious exception of Montalban. Hunter and McDowell are as always enjoyable, but just don’t seem to be having the same kind of fun they did in the original.

It’s directed by Don Taylor, who it seems has also directed other movies. Who knew? He was not brought back for the remaining two sequels.

Speaking of which, I can’t wait. What madness awaits? Must be a chimp revolution in the offing. Probably for the best that I last saw these movies when I was maybe 10 and can’t remember a damn thing about them.

4 responses on “Going Ape #3: Escape From The Planet Of The Apes”