[Note from the future: go here for the full series 8 post-mortem]

What went wrong? Steven Moffat wrote most of the best episodes during Russel T Davies’s tenure resurrecting Doctor Who. Moffat’s first series as showrunner, series 5, with then new Doctor Matt Smith, is so far the most consistently entertaining series of the rebooted show. The first half of series 6 maintains the quality, but the second half mostly falls to pieces. And the less said about series 7 the better. 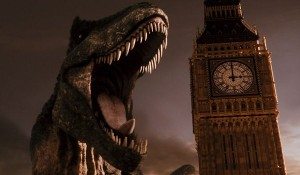 A dinosaur shows up. Everyone loves dinosaurs!

I figured Moffat had run out of ideas and interest in Who, but with Matt Smith’s departure and Peter Capaldi’s new, older, darker Doctor taking over, Moffat claimed to be reinvigorated, with inspiration for at least two more series.

Series 8’s opener, “Deep Breath,” is a far cry from inspired. Insipid, maybe. Sorry, Whovians. I hate to “poop on your Ood,” as the saying goes, but despite what the more slavering fans are writing on the interwebs, this episode is on a par with most of series 7.

First of all, it’s a half hour too long at one hour twenty minutes. There’s no more story than in a regular episode, but the scenes play out at almost twice the length. Which would be great if they were well written. Instead what we get is an hour plus of Clara (Jenna-Louise Coleman) learning to be okay with a new Doctor. That’s literally the entire episode. Everything else is window dressing. With the possible exception, of course, of the mysteriously not dead mechanical man and the strange Eden he winds up in. Which I assume will tie into the rest of the season. 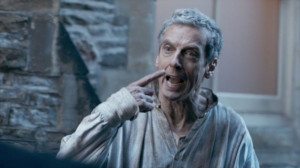 Yes. That is your face.

But back to Clara. Clara. Jesus. Has any character on this show been more poorly drawn? More inconsistently drawn? She was introduced as “The Impossible Girl,” who, existing in multiple forms over the centuries, has always been by the Doctor’s side to protect him, leading to a final whoop-de-doo where she sacrifies her impossible, infinite existence to save Matt Smith’s Doctor. Which is terribly romantic and sad. Or would have been if she’d died. But no, the Doctor saves her, and they carry on having adventures. Thus rendering the entire reason for her being moot. 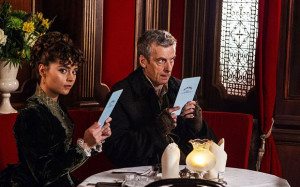 The Doc and Clara order lunch

This strikes me as a bad call. So who is she now? She’s just…Clara. Some girl. She talks fast, is basically her thing. And I guess she has no memory of her past existence knowing every Doctor? Because in “Deep Breath” she can’t get past his having a new face.

Maybe if I cared about Clara as a character I would care about her difficulty with a new Doctor. Or maybe not. We already played this game with David Tennant, and it was a fine episode. Matt Smith’s intro was even better, because he had no one around to startle with a new appearance. He starts out meeting someone new.

The thing is, we in the audience, however initially thrown by a new Doctor, get it. We expect it. Actually, we rather like it. We don’t need an hour and twenty minute lecture on why we shouldn’t hate the new actor. We’re happy with new Doctors! Even if we liked an old one better. Which isn’t the point. The point is that new blood is what makes the show work. 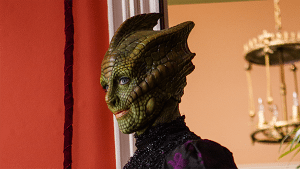 The first 30 minutes of “Deep Breath” are the worst. Back to Victorian England? Really? And the three annoying sidekicks who never change? How many identical one-liners must we hear from Strax? None are funny in this episode. The scene where Vastra puts on a veil to lecture Clara may be the single worst scene Moffat has ever written. I know the show is supposed to be fun for kids, but should it be written assuming no one is smarter than an eight-year-old?

The section of the show where Clara and the Doctor investigate the mechanical man is, briefly, exciting and interesting. So at least ten minutes of this episode don’t suck. And it suggests that once we move on from this “Oh my god! His face is different!” angle, we might be in for some quality Who-ing. 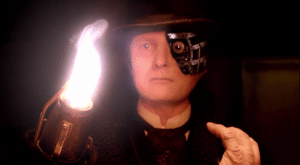 The bad guy, another owner of a new face.

On that note, Capaldi, I think, will work out fine as the Doctor. He’s forced to overdo the “What is this face? Who am I?” gambit for most of “Deep Breath,” so it’s hard to tell exactly what vibe we’ll see from him, but there’s no reason to fear yet.

Ben Wheatley directed the opener, as well as the forthcoming second episode, “Into The Dalek,” but I can’t say his style was much on display. It’s tough coming into a TV show and exerting the same kind of control one can on a movie (his recent films Sightseers and A Field In England being favorites here at Mind Control). Perhaps the drama of Daleks will provide him with a little more room to be creative.

I’m addicted enough to Doctor Who that even after series 7, I’m back for more. Maybe Moffat’s newfound inspiration will become more apparent as the series goes on. Maybe in retrospect, “Deep Breath” will appear necessary. Maybe the strangeness of the Doctor being someone new will be explored in a way that doesn’t feel redundant and simplistic and unnecessary. Recent criminally overlooked movie John Dies At The End does a better job reframing the Ship of Theseus paradox than the Doctor does in this episode, where he tosses off a line about replacing broom handles. But maybe that’s because the notion is only being introduced? And will later be explored at length? Is the theme of the season whether the Doctor is always the Doctor or always someone new? We shall see. 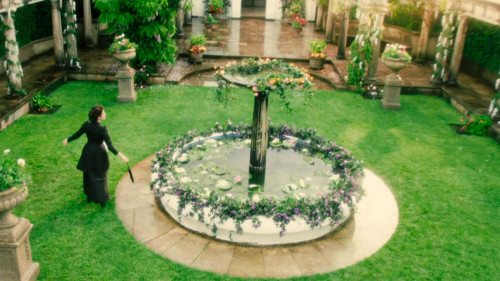 We’ll be seeing this place again…