No one summed up Andy Weir’s 2012 self-published hit book, The Martian, better than the XKCD comic. Here it is:

As far as science-nerd space-porn goes, the novel The Martian is hard to beat. It’s no wonder it was originally self-published. It’s not the sort of book publishers would typically gravitate toward. Almost the entire book consists of insanely detailed descriptions of scientific problem solving. The central character, stranded astronaut/botanist Mark Watney, is paper thin. The other characters are even thinner. The dialogue’s so wooden you could build a ladder to Mars with it. The writing is, to be kind, adequate.

But the nerd space-porn. There’s so much it’s obscene. And it makes the book an interesting read. If nothing else, it’s different.

There isn’t much else. Mark is stuck on Mars for about two years but has only two emotions, which I’ll sum up as, 1) Oh shit! Something went wrong! I’m fucked! and, 2) Awesome! I solved the problem! Things are going to work out great! If Mark experiences any other thoughts while stranded, we don’t hear about them. It’s a remarkably one-track book. 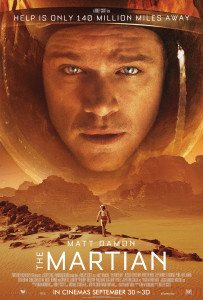 So, I thought, perfect for a movie adaptation. Cut down on the science details while leaving in enough to ensure scientific rigor, beef up the characters into real human beings, and above all, give Mark’s time on Mars some philosophical heft.

Writer Drew Goddard (Cabin In The Woods) and director Ridley Scott do fine with the first of my three suggestions, but not so good on the other two. Essentially what they present is the exact same thing we got in the book, with rather less science. It helps to have actors on hand to embody the thinly drawn characters. At least their faces suggest emotions never made clear by their actions or dialogue. But like the book, the story has nothing to offer but disasters followed by clever problem solving. Mark is stranded, solves a bunch of problems with help from the good folks back home, and is rescued. There’s nothing else to it. At all. Not a single thought in the movie’s head about what it could mean to suffer such extreme solitude. 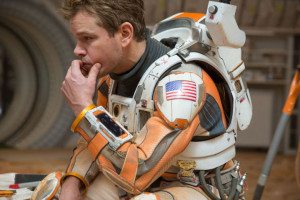 Matt Damon plays Mark exactly as he is in the book. A nice guy nerd who thinks it’s funny to use swear words. His deepest thought is to remark on how everywhere he goes on Mars, he’s the first one there. How does this make him feel? Who knows? Movies about people stranded alone for long periods of time are ripe for reflection on what it means to be alive, what it means to die, what it means to be human. The Martian never suggests any of that. Because Mark shows no real emotions aside from frustration and problem-solving joy, and because he’s soon enough in communication with people on Earth, there’s no sense of what it feels like to be alone on a distant planet. The movie isn’t concerned with that. It’s only concerned with the science-y means of staying alive and rescue.

In short, it is a movie entirely lacking in poetry. 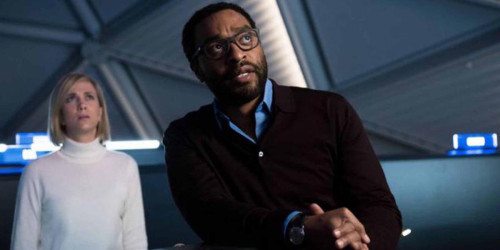 A better leading man, and remind me why Kristen Wiig is in this?

The other actors are fine, though given no more character depth to work with than Damon. On the spaceship Hermes we get the likes of Jessica Chastain, Kate Mara, and Michael Peña, and on Earth Jeff Daniels, Kristen Wiig, Sean Bean, Benedict Wong, and Chiwetel Ejiofor. Speaking of Ejiofor, he kills it, as always. He’s got barely anything to do, and he kills it. Here’s a serious question: Why wasn’t he cast as Mark? Would have made for a much better movie. Damon’s not bad, but he’s not exactly known for expressing depth of emotion. He works best when his characters are meant to exude a certain blankness (e.g. The Informant!, the Bourne movies, Team America).

And speaking of Damon, after Saving Private Ryan and now The Martian, can we just agree it’s best to leave him at home? How many people have to die, how much money do we have to spend, to keep rescuing this guy? 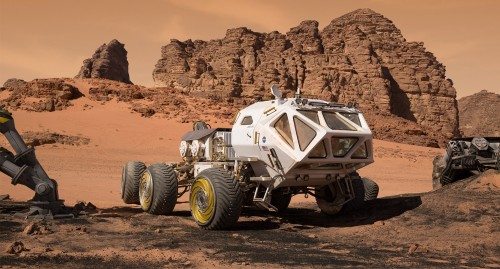 As for Ridley Scott, he’s been on film history’s most amazing losing streak for I don’t know how long. The man earned more goodwill than you can shake a stick at for two movies, Alien and Blade Runner, which yes, are both brilliant. Since then? Thin gruel. Given his track record, The Martian is without a doubt one of his better films. Better than The Counselor. Better than Exodus: Gods And Monsters. Better than Prome—

Then again, you know what? At least Prometheus engendered some emotion in me. Much of which was of the “Oh my god, this is stupid!” variety. But at least it’s stupid on a grand scale. At least the ideas it totally fails to engage with are there not to be engaged with. The Martian offers no ideas. It is the height of competent filmmaking. It sets out to do something very specific, and it does it. It’s the kind of movie that feels a bit like a job to watch. They do their duty, you do yours, and in the end you can say, yep, I sure saw that one. It’s by no means bad. But is it good? Does it offer anything but an inspiring astronaut/engineering career pep talk? 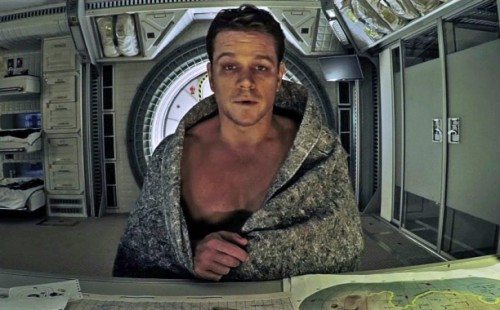 At least Gravity, rife with scientific inaccuracies, is non-stop tension for ninety minutes. There’s precious little tension in The Martian’s two hours and twenty minutes. Things go wrong, but never for very long. It’s remarkably even-keeled. It just goes. Scenes in mission control with everybody cheering feel perfunctory. This is the kind of movie those scenes are supposed to be in, so here they are.

It looks nice. The Martian vistas are impressive. All the rocketships and spacesuits and other details are realistic. And they should be. All the movie cares about is science reality. Which I’m all for, but at the cost of character and story? Seems like a poor trade. At the very least, Scott might have included a slavering alien or an evil cyborg. Oh well. Maybe his upcoming Prometheus sequel won’t su—

Oh, I give up. I’m watching Alien tonight. 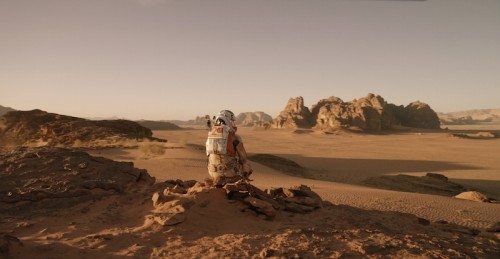 2 responses on “The Martian, In Which Ridley Scott Does Not Make Another Blade Runner”