The ‘60s were a rough time for American movies. The studio system was falling apart, the country was going mad with war and hippies, change was everywhere but in Hollywood. No doubt there are many fine ’60s films to be found pre-’67, but there are many more disasters, and not merely the disasters to be found in every era, but amazingly, brilliantly out of touch disasters. Try watching a ‘60s studio comedy not directed by Mike Nichols and die a long, slow death. And the musicals, my god. It’s a wasteland of horror in every direction. Anything meant to be delightful and carefree came out leaden and dreary. Or just gob-smackingly dumb.

The dramas didn’t fare any better. Begun in the late ‘50s, the Age of the Epic rolled on into the ‘60s, a style of filmmaking too often highlighting everything culturally wrong with Hollywood—overlong, overacted, invariably set safely in the past, pompous, and lacking relevance to anyone under 30 not weirdly obsessed with the Bible. Basically, everyone wanted to make either The Ten Commandments or Lawrence of Arabia. Failures abounded. Even Kubrick had a hell of a time with his Hollywood epic, Spartacus, so much so that he swore off the studios and went it alone from then on out (resulting in the last great epic of the era, 2001).

One epic inspired by all things David Lean was The Sand Pebbles (’66), directed by Robert Wise and starring Steve McQueen. At the time, it was highly regarded. Critics and audiences both loved this three hour tale of a simple American machinist on a Navy gunboat working China’s Yangtze River in 1926. It was nominated for eight Oscars (didn’t win any). It features sweeping, widescreen vistas shot in Taiwan and Hong Kong. It touches on topics like racism, sexism, and imperialism. It doesn’t shy away from a grim, hopeless ending. It is, in every way, a Very Important Film.

And it is terrible. I’d sooner spend three hours milking cats than sit through The Sand Pebbles again.

The mechanic and his assistant

McQueen is Jake Holman, a good ol’ American boy from Utah who aw-shucks his way around China on a crappy old gunboat, the San Pablo, peopled by fresh-faced, lazy Americans and their Chinese help. Drama ensues from the start when Jake learns a Chinese man, Chien, runs the engines and he, Jake, is expected to just sit around and watch. I think? Or maybe take orders from Chien? It’s unclear.

Everything related to dramatics is unclear in The Sand Pebbles. The engine drama involves the ship going too fast for the engines to handle, Jake saying so, Chien sort of helping Jake, I think? But not wanting to because the Chinese think the engines are haunted? And does the captain know he’s going too fast on purpose? And is Jake mad at the captain? Or at the Chinese help? Chien is killed when a gear slips on a piston, and the head “coolie,” Lop-eye Shing, blames Jake. I think this was a bad thing? It’s like you can clearly see the drama happening without seeing the drama.

Americans making racist asses of themselves

There’s an absurd subplot where one of the Americans, Frenchy (Richard Attenborough), falls instantly in love with the most expensive whore at a bar the sailors hang out in. Only she’s not exactly a whore. She’s new, and costs $200. Which is what she owes the guy who bought her, Victor (played by the venerable James Hong). Only why would Victor not want to whore her out to recoup his money? Why does he just want someone to fork over $200? I have no idea. Why anyone would name their son “Frenchy” also remains a mystery, but hey, it was the ‘20s, what do I know.

Jake trains a new coolie, Po-han (Mako Iwamatsu), to work the engines with him, but Po-han, sent ashore by a vengeful Lop-eye, is caught in the rising tide of rioting Chinese nationalists, strung up on the beach by a mob in view of the San Pablo, and tortured—until Jake puts him out of his misery with a bullet.

All very dramatic, and though I have no interest in a movie telling me what to think, I don’t know what to think. I don’t think the movie knows what to think. It’s written by Robert Woodruff Anderson, who had previously written numerous weepy TV shows and TV movies, and a couple melodramatic films. He is, to understate things, no Robert Bolt (of Lawrence of Arabia fame). 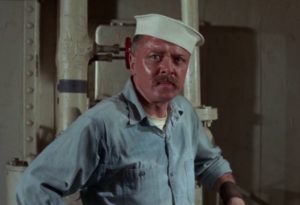 Nothing leads to anything else in The Sand Pebbles. There’s no thread of a story to follow. Jake has no desires or needs or fears. Intermission comes after Po-han’s demise (being an epic, the film includes an overture, an intermission, and an entr’acte), and damned if I could have guessed what would come next. Literally anything.

Melodrama is what comes next. Frenchy’s story of love. He pays the $200, gets his girl, Maily, and no sooner does he hole her up in a crummy little room than he decides to marry her in a scene I trust will move you to nap. Their love does not, alas, end happily.

Other characters are of still lesser importance. There’s the captain, Collins, played by Richard Crenna. For most of the movie he does nothing but look like he’s about to say something important. He never does, until the end, when, out of the blue, he more or less sacrifices his life, I have no idea why. Nobility? That must be it. It’s a very noble sacrifice. Too bad it’s made by a character we have nothing whatsoever invested in. 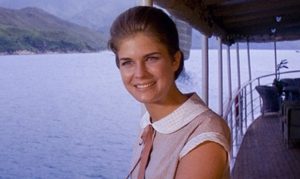 And let us not forget the woman of the picture, Shirley, the innocent school teacher played by Candice Bergen in only her second movie. She serves zero puporse in the story, save for making eyes at Jake. She barely has cause to speak. Her first scene takes place at a dinner table with Jake and three other men. Everyone talks except her. She smiles, frozen and stiff, saying nothing. This scene is shot and cut from seemingly every wrong angle available. It’s so bad I felt concern for Robert Wise’s health. Maybe he’d eaten a bad fish the night before shooting? And another in the editing bay? I’ve never been so thrown by a scene of people at a table talking. I could barely make out who was sitting where, and why every minute or so they’d cut to Shirley and her freakish, silent grin.

The end is as baffling as everything that comes before it. The shit hits the fan after the Nanking Incident (which I’m sure you remember in detail), everybody hates the foreigners, but the captain, instead of getting the heck out of there as ordered, decides to go upriver to save a missionary, Jameson, with whom Shirley lives.

Watching her man in the crowd

What follows is a deadly action sequence of the ship blasting through a barricade of Chinese junks, and Americans and Chinese shooting and stabbing one another. The Chinese are thoroughly whupped, but not without inflicting many an American casualty. The rest of the American crew spends not a second mourning their losses.

The captain, Jake, and some other guys make it to Jameson and Shirley, but oh no! They’ve renounced their U.S. citizenship and they’ve got a document to prove it. They can’t be rescued now! It makes perfect sense. Making still more sense,  Jake out of the blue announces he’s staying there with them. Then the bad guys arrive, the bullets start flying, and everyone forgets everything they’d just said. Pretty soon the Americans are dead and Jake, gutshot and alone, his captain bleeding out on the ground before him, cries out, just before he’s shot dead, “What the hell happened?” 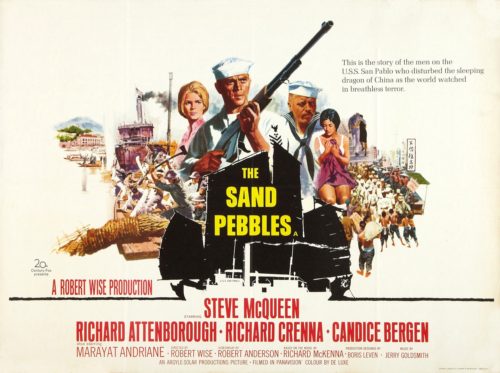 11 responses on “The Sand Pebbles And Epic Muddleheadedness”