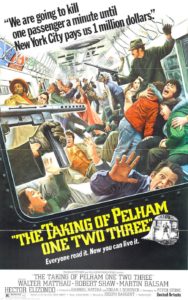 I’d only seen The Taking of Pelham One Two Three (the original, from ’74, not the dumbass remake) once, maybe twenty years ago, on video, and didn’t see what the fuss was about. Nothing clicked for me. All I remembered was a lackluster ending and not much leading up to it.

Then I saw it last week, in the form of a lovely 35mm print, in a packed theater, and as the title says, my tune has changed.

It is now a happy tune!

More than anything else, The Taking of Pelham One Two Three is just really goddamn funny. And not inadvertantly. The script, by Peter Stone, from the novel by John Godey, is tight as a drum, and packed with fantastic one liners and perfectly drawn New Yorkers. If any movie screams NEW YORK, this is it. Nobody in here has a shiny Hollywood face. Everyone is a character. Just like in NYC.

Leading the charge in the matter of non-Hollywood faces is Walter Matthau, which how in the hell did Walter Matthau become a leading man? Only in the ‘70s, my friends. He’s perfectly cast (unlike, as a side note, in another ‘70s flick I just saw on 35mm, Charley Varrick, which title role was written for Clint Eastwood. Try imagining Matthau playing a role written for Eastwood. It hurts, doesn’t it? Believe me, it hurts worse actually watching it).

Am I really the best man to lead this tour?

Matthau plays transit authority lieutenant Zachary Garber as a guy with a low-key sense of humor and a commitment to getting his job done right. He starts his day leading a tour of the subway command center for some outrageously ‘70s-style stereotyped Japanese men (who at least get the last laugh) when what should happen but some schmucks highjack an entire subway train.

This genius plan is enacted by ringleader Mr. Blue (Robert Shaw) and his compatriots, Mr. Green (Martin Balsam), Mr. Grey (Hector Elizondo), and Mr. Brown (Earl Hindman). I’d forgotten this is where Tarantino got his crook names for Reservoir Dogs. Of course Shaw is awesome, because he’s always awesome, here playing some kind of ex-military mercenary unafraid to kill or die. Balsam is the ex-subway driver needed for his knowledge of the how the system works, and the other two guys have little personality worth caring about. The main thing is that Mr. Grey is a nutjob who likes shooting people. 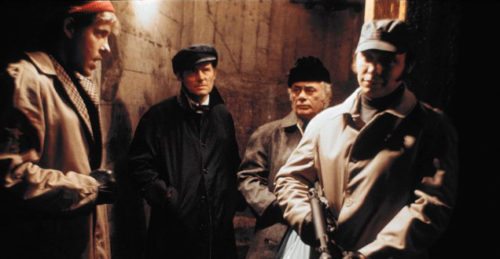 The fellas split their loot

Nobody much dies in Pelham. Only two, and they’re both subway employees. None of the hostages in the subway car get shot. This is a movie that plays at a serious, grim outcome, but never gets anywhere near one.

And as for the highjackers’ plan, it ain’t much, though the movie plays out as if it were. All it comes to is that they’re going to stop the train between stations, rig it to keep going without a driver, and take off running with the money.

What makes Pelham entertaining is its characters. Everyone is hilarious. The Mayor (Lee Wallace), whom we meet sick in bed, is a riot, his deputy (Tony Roberts) is obviously the man running the show, and the other subway employees are loud, abrasive New Yorkers more pissed off at the trains running late than some lousy hostages and jerks with machine guns.

Jerry Stiller shows up to be somewhat disgruntled

Nothing in Pelham goes deep. This isn’t Dog Day Afternoon. We get to know Shaw and Balsam a little, but they’re not half as interesting as Sonny and Sal in Dog Day. But that’s fine. Pelham isn’t about the depth of the characters, it’s more of a procedural, one that never slows down, and never lets you wait long between laughs.

And to be clear here, it’s not silly humor. It’s the humor of New Yorkers facing this absurd highjacking scenario, and reacting all too realistically.

Joseph Sargent directed it. He does a perfectly respectable job. He’s not exactly known as some kind of stylist. What is he known for? Such favorites as Colossus: The Forbin Project, the Burt Reynolds flick White Lightning, and everyone’s favorite sequel, Jaws: The Revenge.

If Pelham suffers from anything, it’s the ending. It doesn’t really have one. The plan, such as it is, is foiled pretty much by Matthau saying, hey wait a minute, maybe they rigged the train, let’s go see if they’re at that station where the train stopped. Shaw goes out in as anticlimactic a manner as possible.

As for the final gag, well, it’s a gag, so why not? If you’ve got no ending, you might as well go out on a laugh.

The Taking of Pelham One Two Three doesn’t plumb the depths of the human soul, nor does it offer a brilliant highjacking scheme, but hell if it isn’t entertaining. What more should we ask? 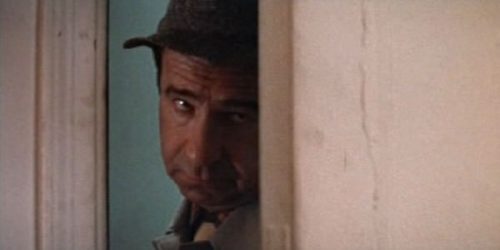