Comic book movies — as you may have noticed — are a big thing these days. But almost none of them feel like actual Golden Age or Silver Age comic books, with that medium’s hyperkinetic storytelling style, exaggerated characters, and goofy man-child aesthetics. Comic books used to be for kids, and mostly for kids who wanted to escape into a world that they incorrectly imagined was adult. Richard Donner’s Superman was that kind of comic book movie. Deadpool, to a degree, was as well — although it was more for adults who wanted to escape into a world they correctly imagined children would imagine was adult. 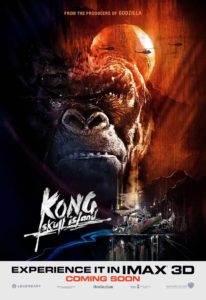 Kong: Skull Island is this kind of comic book movie. A true comic book movie of swashbuckling adventure, fantastic scenarios, and overblown everything. It is — if nothing else — off-beat and off-kilter, and skull-thumpingly so. It is also occasionally fan-fucking-tastic, especially when Kong is kicking massive ass.

And then it’s just sort of odd and goofy, like comic books used to be, draping adult-style emotions over adult-style characters. It takes a while to understand that Kong: Skull Island does this on purpose — a choice I’m sure many will question.

In my case, projection errors caused the screening I attended to restart four separate times, meaning I watched the film’s brief prologue repeatedly in succession. When it first ran, I hated it, finding it cartoonish and silly. The second time, it was irritating. The third time, its familiarity allowed me to stand back a step. With that distance, I stopped fighting the strange mood of the film and began to wonder what that mood would engender.

The fourth time through, they figured out how to sync the pointless 3D and the digital file ran clean all the way to the end credits. It was an experience that I more or less enjoyed, but not as I expected to. For although you may have been enraptured by well-cut trailers and culturally savvy posters, this film is not Apocalypse Now meets old-skool Godzilla.

It is more The Fifth Element meets Commando — two films I’m decidedly iffy on —with a CGI ape playing Schwartzenegger’s part much better than the Governator did. It is space opera, except not in space. It is war games, but with an ape so huge its turds could bury a tank.

Kong: Skull Island isn’t brilliant, except when it is, which is often enough. Also in its favor, it doesn’t retread the same tired story line RKO first brought to life in 1933. There are connections, and a wink or two, but not too much more.

In this tale, John Goodman‘s half-crazed scientist leads an unwitting expedition to Skull Island, a place he suspects will hold monsters. He hires Tom Hiddleston‘s ‘master tracker’ — as if finding Kong would be a challenge — and enlists Samuel L. Jackson‘s war-mad Col. Packard and his helicopter squadron, plucked from the embers of the just-abandoned Viet Nam war. Together with Brie Larson‘s photographer, some expendables, and a few refreshingly cross-type, minority supporting characters, they travel to the preposterous Skull Island and get well fucked.

The film’s characters are ludicrous and shorthand but still loveable; albeit having Larson and Hiddleston doesn’t hurt in that regard. Also good are Shea Whigham and, in his way, John C. Reilly as a late edition.

Assuming you click with the film’s chest-beating, skull-thumping, pituitary-squeezing tone you’re in for a good ride. Director Jordan Vogt-Roberts‘ last film, The Kings of Summer, also was about rulers of the imaginary. You’d think the similarities would end there, since that one was a comedy about high school boys living in a fort in the woods, but you’d be wrong.

This isn’t your bog-standard giant monster movie, or that ‘but dark.’ For one, its trajectory follows a strange map. We first meet Kong in the prologue. Then, as you’d expect, there is a significant section in which our cast comes together and exposition gets shoveled hard and fast. From there, one expects the tension to build unto unbearable levels — but that’s not how Vogt-Roberts rolls.

Well before you’d think, Kong shows up and there is no doubt — not a single giant primate tear’s worth — that the show is his alone. This sequence of unmitigated mayhem is well worth the price of admission alone.

But then… the film becomes unextraordinary for a while, except in how abnormal it feels. Giant beasties appear, some impressive, some not. Character moments work and then they don’t. Images flash stunningly and then drizzle into the plasticity of too much computer effects. There is vision here, and creativity, and a boldness but it doesn’t quite set perfectly. 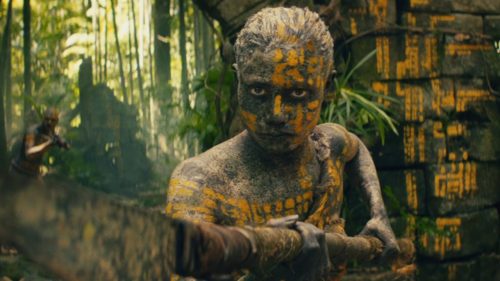 Kong: Skull Island is a film that makes you stop and wonder, but not always in a good way. In that, it’s incredible. It hasn’t been bludgeoned into corporate shape by Disney or Marvel (same thing). Its indie director was allowed to do something different — even though that different thing was only somewhat successful.

And so somewhat successful is a huge success for cinematic individuality! Kong cracks the otherwise perfect facade of what blockbuster entertainment has become, leaving the edifice unstable. It’s still recognizable as a blockbuster, but it’s one that feels like it could crumble around you at any second.

Will you find that exciting or disaffecting?

I can’t speak for you, but I’ll probably see it again.

It was vastly more interesting than Gareth Edwards‘ morose and plodding Godzilla. Kong: Skull Island is a comic book ride and, in that way, it made me feel young again. It made me dream of adult things in a way I now know adult things aren’t and can never be.

Oh, to be too young to be old again!

One response on “Kong: Skull-Thumping Island”