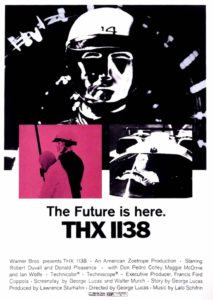 I hadn’t seen George Lucas’s ’71 debut feature, THX 1138, for at least 25 years when I saw a screening of it last night. It wasn’t the same movie. I don’t mean in the philosophical, I’m older now, “we can never see the same movie twice” sense. I mean back in ’04 Lucas, without my noticing, retrofitted THX 1138 in much the same way he did the original Star Wars trilogy with new CGI effects, to better realize, as he is wont to claim, his original vision.

Or, to be more precise, to hide his past. Lucas is obsessed with covering up his early work. Can we just come out and say that now? Could anything be more obvious? I’m not a professional psychologist, but neither am I blind, deaf, and sporting a grapefruit in place of a human brain. Lucas is afraid to be known for the work he made when he made it. He wants his legacy to consist only of what he wants his work to have been.

THX 1138 is a dystopian science fiction film based on a short Lucas made at USC, and was produced by Coppola for his nascent American Zoetrope production company. It’s inspired by 1984 and Brave New World and the like. Or maybe not “and the like.” Those first two pretty much cover it. THX 1138 plays out like 1984 minus the philosophy, plus Brave New World’s Soma.

Fun times in the future

There is precious little story and, to its credit, precious little explanation or exposition. Lucas wrote the first draft of the script, then had Walter Murch, future genius sound-designer and editor, help him rewrite it. It’s shot with a striking minimalism, a very smart use of a limited budget, in wholly white rooms and the then futuristic white hallways and concrete train platforms of the almost-but-not-quite finished BART train network in the San Francisco Bay Area. It’s an effectively antiseptic, cold, mechinistic future-look.

Robert Duvall plays the title character, named as is everyone in this bare-headed, white-clothed future, with three letters and four numbers. Like license plates. Or phone numbers. In short, not like unique individuals. Like everyone, he takes drugs to keep him complacent and calm and to enable him to do the precision work of building more silver-headed robot guards.

After work THX kneels before an image of Christ, known as OMM 0910, and confesses his malaise and confusion. OMM’s computerized voice responds at pre-programmed intervals with pre-programmed responses regardless of what THX (or, presumably, anyone) tells it.

LUH enjoying a day at work

Speaking of which, everyone on the video screens THX watches in his tiny white home compartment is black. No one in the larger society is. Late in the film, trying to escape, THX meets a black man, SRT 5752 (Don Pedro Colley), who talks of himself as a hologram. Nevertheless, he appears entirely corporeal. One assumes that in this future world, blacks are at least as oppressed as they are in our current one, to the point where they exist only to provide video entertainment for the white masses, and even think of themselves as their projected images, holograms, rather then flesh and blood humans.

So that’s kind of interesting. Then again, SRT is also stereotypically good-natured and helpful, guiding the troubled white man to freedom and dying for his trouble.

THX has a roommate, LUH 3417 (Maggie McOmie), a woman. One day she switches up THX’s drugs, freeing him from his sedation. They have sex and fall in love. Worse yet, THX can’t focus on his job, and almost causes a nuclear meltdown.

And so, after a bit of this and that, THX goes on the run with his new pal, SEN 5241 (Donald Pleasance at his creepiest), which bit features a pretty great car and motorcycle chase through various Bay Area tunnels. 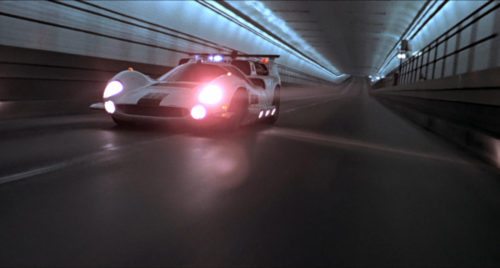 The chase is eventually abandoned when whoever rules this future hell decides that apprehending THX is becoming too costly, and THX makes his way up a long shaft to the sun above. What’s up there and what happens to him is left to the imagination.

THX 1138 doesn’t offer much to think on (unless you’re on the fence about living in such a future?), but I like its style. It tells us nothing, and shows only what helps move the story along. It’s clearly the work of young filmmakers burning with the desire to make something meaningful and cool and purely cinematic.

So why not leave it as it is?

Because we’re talking about Lucas. His 2004 Director’s Cut is wall-to-wall CGI. Literally, in many cases. A lot of his fixes are backgrounds. Where in the original we might see THX at his work station, and behind him a gray wall, now we see, fading into the blurred distance, an endless row of similar workers. There’s nothing as egregious as a digital Jabba, but almost every scene seems tweaked in one way or another. All of the video projections are altered, the crowd scene is greatly enhanced, shots of parking lots and train stations and anything else city-like are far more imposing, THX’s workplace is now vast and full of people, and his work on robots is totally remade, with glowing radioactive cylinders sliding into robot heads replacing the dull metal ones sitting on plates in the original. And then there’s the masturbation machine. Hadn’t seen one of those before.

Normally I hate this kind of messing with old movies. So maybe it’s because I have no prior attachment to the original that I didn’t find the added pieces too jarring. They’re noticeable in that they obviously aren’t from a low budget movie made in ’71, but stepping back from that viewpoint and just taking in the updated movie as its own thing, I thought the many added tidbits made for an unusual and pretty cool blending of old and new aesthetics.

Bet you didn’t think this was leading up to that admission, did ya?

(I might also note that this screening featured Asian Dub Foundation performing a (mostly) live original score to the movie, the modern sounds of which might have blended with the modern effects to create a more organic experience.)

Well. This all brings me to Lucas altering his past. If Lucas, or any filmmaker, or any artist, wants to go back to their early work and do whatever the hell they want to do to it, that’s fine by me. It should be fine with everyone. Sure, it’s probably ill-advised and best to leave what you did when you were young alone, but an artist’s work is an artist’s work. If they feel the need to mess with it, that’s their business.

Maybe they’ll create something better than the original. Maybe worse. Maybe, simply, different. In the case of THX 1138, I like the result. In fact, I found it so intriguing that, given my love of film history, I’d now be interested in watching the original to see if I actually prefer the updates, or am drawn to what I’m usually drawn to: Old science fiction that looks its age.

Sorry. Lucas says no. His past is his, and he wants it buried.

This drives me insane. Movie history is history. It matters. It amazes me that Lucas lives so far up his own ass that he can’t understand this. It’s criminal. He is stealing film history and keeping it for himself. He doesn’t understand that once released, art belongs to the world.

I recognize the train…Not so much the station

If I want, I can watch something like five versions of Blade Runner. I happen to like Scott’s final Director’s Cut the most. It’s what I watch when I watch it. But having every version in pristine condition is not only cool, it’s necessary. To hide or obscure the original version, with it’s faux-ending and laughable voice-over, would be to bury history, and we know what happens when history is forgotten: We end up with a deformed, evil, shadow-Earth Muppet for president.

Burying the Star Wars trilogy is bad enough given those movies’ cinematic and cultural significance, but it’s the irony of burying the original THX 1138 that really kills me. Lucas made a movie inspired by 1984 about a repressive society obsessed with control and consumerism, and he’s doing all he can to throw its original incarnation down the memory hole.

He’s become Winston Smith himself—but he’s Winston at the end of the book. He’s doing Big Brother’s bidding because he wants to.

(If you want to go down the rabbit hole with Lucas’s alterations to THX 1138, this site shows what every change looks like.)