When Logan, the newish Wolverine movie starts, it does so bravely. Wolvie (Hugh Jackman, covered in olds make up) is a nasty, rundown, suicidal drunk. 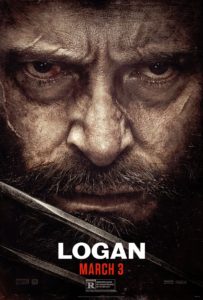 And he’s all of those things with giant fuck-off claws that can cut through anything.

You do the math. Anything divided by three claws becomes four pieces, some of them still capable of whimpering briefly.

So unlike all the other X movies — in which Jackman runs around growling like a misunderstood, gruff teddy bear, slicing the air menacingly without actually hurting anybody — in this one he actually makes contact with flesh. A lot. He jabs his pointy hand-bits through people’s skulls. He lops off limbs exactly as you always expected and dreamed.

And I’d be lying if I didn’t say that was wholly satisfying.

Finally! Let the character out of his cage! Let him be brutal and bloody (Studio note: but not too bloody, okay? Suggestively bloody; not The Shining bloody. Only have him fight people who’ve been 3/4 drained of blood. Let me see a draft.) And then — here’s a great idea — let’s get decrepit old Professor Xavier (Patrick Stewart) in there, but let’s give him Alzheimer’s or something, so when he has seizures he unwittingly turns everyone’s head into a dryer with a cinderblock in it. And let’s have them both be eking out an existence that’s a wee step up from box under the bridge, struggling through in pursuit of a small, hopeless dream. 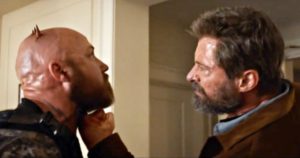 Into this appealing mix, let’s throw a nutty plot. There’s a girl — a mutant, one of the last! — who might as well be Wolverine v2, only she’s 11, doesn’t speak much English, and has bonus feet claws she uses exactly once. Then let’s have her cut the ever-living stuffing out of everyone she meets in a way that makes Wolverine seem like kind of a wuss.

Sounds pretty good, right? Yeah. It IS pretty good. It looks good. It feels good. For about 15 minutes.

Then it slowly, inevitably spirals down the wide drain hole that is superhero filmmaking, so that by the end all you can hear is gurgle.

Lots and lots of gurgle.

And not the good kind of ‘I have an adamantium claw shaped hole in my neck’ gurgle, either. Just who-wrote-this-shit gurgling.

Where to start. With the good? Sure. That would be polite. 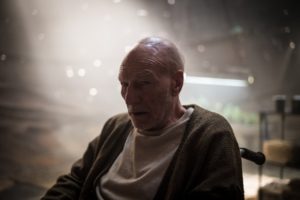 Patrick Stewart is good. He’s quite good, actually, as the elderly gentleman who’s doing his best to retain his wits in the face of disease. To salvage what remains of his once great self.

Hugh Jackman, on the other hand, is not good. While certainly he’s been good in the past, here he quickly proves himself completely out of touch with what it might be like to have gone to pot. (He did a better job playing washed up in Real Steel, which incidentally is a better film than this one.)

But this is not the main problem with Logan. Logan — written and directed by James Mangold — doesn’t have the courage of its convictions. It starts rough and brutal and ugly but clearly has no experience with anything of the sort. The problems the plot poses for its characters are never addressed, except in the tritest, most Marvel-ified way.

Exhibit A: Wolverine, a legendary bad-ass who’s lost his mojo, experiences no self-doubt. Presented with a younger, tougher, less-inhibited version of himself, he expresses no jealousy, no sense of recognition — only a glum sort of self-pity and an urge to leave the girl behind. He doesn’t refuse to fight, or try to out-brutal her, but instead somehow does BOTH poorly. 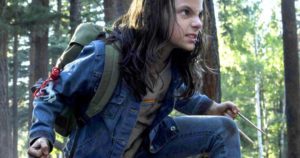 Exhibit B: Laura (Dafne Keen), the girl trained in a lab to be a killer, proves how completely vicious she can be and then it slips her mind. She wants to reach some coordinates in North Dakota so she and any other mutant survivors from her lab can reunite and run — but they are all, from birth, trained to slaughter. Why would they run? That’s what the film says she wants, though. Her problem then, theoretically, is simply one of transportation. She can drive. She can kill anything and heal herself. So all she really needs is a map. The film presents her as if she needs a family, but that’s Mangold overlaying generic experience onto a singular character without bothering to understand her.

And so forth. It’s all so shorthand you almost go with it out of laziness, but then it’s also all so pointlessly contradictory you don’t.

People say, with veracity, that films are only as good as their villains. If so, Logan sucks. Boyd Holbrook plays Pierce, a dude with a bionic arm who works for Evil Lab Corp. He’s sent to fetch Laura and he drives much of the conflict in the film.

None of it makes a lick of sense.

Backstory tells us that Laura and her lab-mates were all going to be ‘retired’ before they were broken out by kindly nurses. But Boyd doesn’t try to kill Laura, nor do he and his compatriots try to kill any of the other mutant children. Instead, Pierce drives around with vast numbers of black-suited SWAT types and what one would presume is an immense insurance policy overhead. These nameless, faceless, meaningless ‘bad guys’ get shredded with such surety and regularity that it’s difficult to imagine a salary that would make such a job worthwhile. Or an adjustor who’d bother figuring out the premiums. 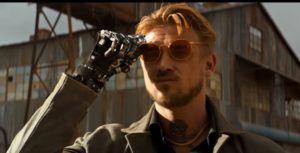 Doesn’t Pierce know his quarry is a tiny tornado filled with razor blades? Time and again he throws meat into the blender and expects the blender to somehow get clogged up and fail.

That’s not how blenders work, pal.

Worse still, Laura takes a backseat to Wolverine when she is clearly the more dangerous of the pair. She isn’t worn out, run down, wounded, and old.

Stephen Merchant (as Caliban) and Stewart add some pathos to what should be a delightfully pathetic tale, but there’s not nearly enough suffering here for a film built on blades. It is, from quite early on, just a comic book movie with a bit more blood. It is not McCabe and Mrs. Miller or Unforgiven or any other film that makes you feel its violence as an actual element of drama; it is a Marvel movie with the action-style violence of Commando.

Anyway, Wolverine dies. His eulogy, delivered by Laura, is a quote from Shane — a film the girl has seen once — probably the only film she’s ever seen.

If I had any popcorn left, I would have thrown it at the screen. I should have stood up like the old hag in The Princess Bride to shout, “Boo! Boo! Rubbish! Filth! Slime!” because this is the least appropriate quote one could have put in this character’s mouth in this film.

At no point in Logan is killing wrong, or unhelpful, or even marginally avoided. Wolverine is no Shane. He hasn’t run from violence; he’s just not that good at it anymore. And if the ‘brand sticks’, well then that’s telling his corpse that his seeming redemption by the film’s end is bullshit. He was a killer and he died a killer. Or that she let him die because he’s a killer. Either way: wrong. And — worst of all — the girl parroting these lines, after hearing them once and clearly never considering them — says there aren’t any more guns in the valley.

She is the biggest gun of them all. She has littered the valley with corpses, all armed with guns. She has used a gun, even though she is weaponized adrenaline personified, to kill the unkillable. She isn’t Shane leaving the valley in peace. She’s Jack Palance shuffling along after killing everything in the valley that moved.

You cannot put a cherry on a cow pie and call it a sundae. You cannot spin a tale that depends on its violence as its raison d’etre and then say, ‘just kidding.’ That hasn’t worked since, well, ever. They used to do that during the reign of the Hayes Code, with films like the original Scarface, so the censors would shut the hell up, but no one bought it.

No one buys it here, either. If you like Logan, it’s because Wolverine finally gets to kill a lot of people. Condemning him for that is the height of hypocrisy.

Logan is to Mark Millar’s comic book series Old Man Logan what Batman v. Superman: The Dawn of Justice was to Frank Miller’s ‘The Dark Knight’. It’s a dangle. It’s a sop. It’s a shame.

The character deserves better. So do we.

One response on “Sharpen Your Claws: It’s Logan”