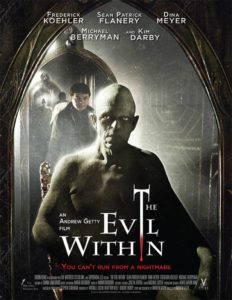 Whatever you end up thinking of the movie itself, the story behind The Evil Within (’17) is a good one. Written and directed by Andrew Getty, heir to the Getty oil fortune, he spent fifteen years making it, much of it in his own mansion, all with his own money (about 5 million), and died in 2015 before he’d finished it. And here I am always complaining how the filthy, absurdly rich never devote themselves to mad and bizarre artistic projects!

Inspired by the terrifying dreams of murder Getty had as a child, The Evil Within tells the story of a young, mentally challenged man beset by horrible dreams woven by a creepy figure he calls the Storyteller. Which was the original name of the movie. Getty figured his own nightmares didn’t come from his own mind but were put there by someone else. In the movie, the Storyteller is played by horror movie stalwart Michael Berryman, whose face, once seen, no one ever forgets. 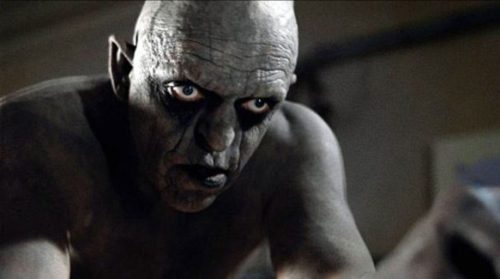 Berryman as the Storyteller

In an early scene, Dennis (Frederick Koehler), writhes in agony lying facedown on a bed, unable to wake up from a nightmare. Michael Berryman’s demon-creature-storyteller creeps up behind him, affixes a zipper to the back of his head, runs it down his back, unzips him, crawls into Dennis like he’s a bodysuit, and zips himself up. Neato!

Seriously. It’s a wild scene. The special effects realizing it are not normal, which in horror is always for the best. You want to see what you haven’t seen before in a horror movie. From its opening moments (which moments make up something like a ten minute introductory dream sequence) the effects in The Evil Within are unique. There’s stop-motion, animatronics, endless weird mirror effects, and all kinds of in-camera tricks helping to create Dennis’s dreamworld, which might well be the entire movie. (It’s all a dream! I’m still ASLEEEEEEP!)

So it’s a mighty strange movie, and with Koehler going all-in on the mentally handicapped angle, one often wonders, watching it, whether any of this is really a good idea. 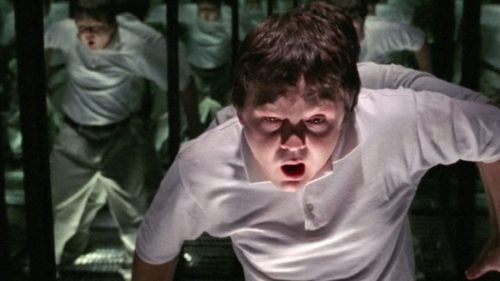 I think maybe it is! I mean it’s full of things you’ve never seen in any other movies, and it is, for the most part, an actual real movie, with something pretty close most of the time to a story. In short, it’s not a trainwreck. It should be. The lead performance alone should cause one serious concern. Yet Koehler doesn’t play Dennis as a joke. He’s in it for real. And there are scenes, most notably the freaky dream sequences, that are legitimately good. Granted, there are other scenes legitimately bad. But maybe they’re good bad?

There’s not much to the story. Dennis is looked after by his older brother, John (Sean Patrick Flanery). One day he buys Dennis a giant mirror. Dennis hates it. The Storyteller comes out of it, along with a non-mentally troubled version of Dennis, who implores his mirror self to kill some local pets, then local children, then just about everyone in town, even the hot ice-cream lady.

Mostly things that happen lead to other things happening, as one expects of “stories.” Other times, not so much. Not surprising in a movie worked on for fifteen years (and, ultimately, completed by producer/editor Michael Luceri). 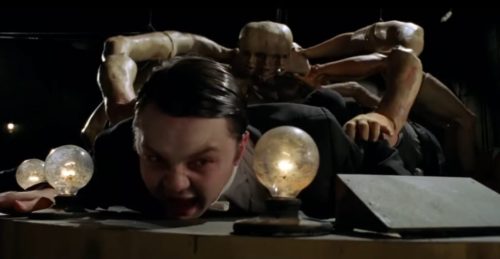 The dialogue is suitably off for a movie as off as this one. Is it bad? Not exactly. Just off. The acting too. You can’t fault anyone for not trying—these are real actors giving real performances—but given what they have to work with, they may not be “good” performances.

I think mostly I’m just impressed with how this isn’t the worst thing ever. It’s a genuine vision by someone who, it might be fair to say, has never actually seen a movie. It might have a terribly ill-advised protagonist, yet it plunges ahead with such obvious lack of concern for offending anyone it ends up not being offensive. Well. I think. Your mileage may vary on that one. Still, you’ve got to hand it to Koehler for his Andy-Serkis-as-Gollem/Smeagol-esque talking-to-himself-in-the-mirror scenes. 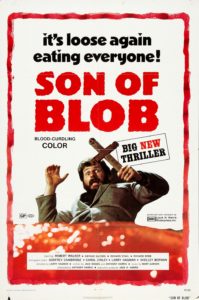 As luck (?) would have it, the same week I saw The Evil Within I caught a screening of another movie by a one-time director possibly unfamiliar with these things we call “movies.” It’s a little something called Son of Blob aka Beware! The Blob, from ’72, directed by, of all people, TV actor Larry Hagman, of Dallas and I Dream of Jeannie fame.

Here, too, we have a good backstory. Seems Hagman was as a child obsessed with The Blob (’58). Loved it to death. Desperately wanted to make a sequel. He signed up the producer of the original, Jack H. Harris, to executive produce it—you know, to give it legitimate Blob cred—and cast it with friends and neighbors. Like Dick Van Patten, Burgess Meredith, and Cindy Williams.

It’s written by Anthony Harris. Related to Jack? IMDB is silent on the matter. In any case, this Harris is not in any way hampered by knowledge of film writing. His “script,” a word I hesitate to use in this case, is something to behold. It might have been salvaged by an editor, but I swear no editor worked on this film. Scenes go on so long I thought the first one would take me to the end credits. To be fair, Harris claimed most of the movie was improvised. On the evidence, I’m willing to believe him. 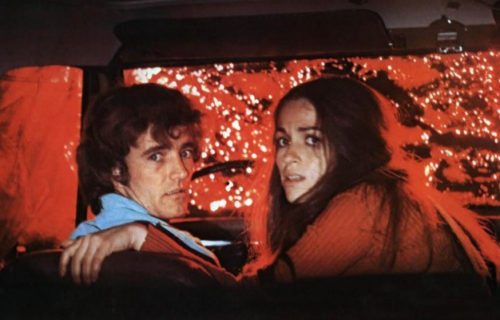 There is no story to speak of. There’s this one guy who has a jar in the freezer of stuff some guy at “the site” dug up, and you guessed it, it’s blob, it eats a kitten and starts growing, eventually making it to a bowling alley/ice rink where all the good action goes down. I kind of liked the bowling alley scene. They finally bust out a ton of blob-goo, people run and scream and whatnot, it’s a real gas.

I have to believe Hagman took a lot of acid in the ‘60s. There’s no other possible explanation for this movie. I think he just wanted to see a bunch of Technicolor blobbing. Of note, the blob effects scenes were filmed by Dean Cundey, later to become a big deal cinematographer (Rock and Roll High School, Back to the Future, Jurassic Park, Apollo 13, and many of John Carpenter’s best flicks).

In the world of one-and-done directorial dream projects, Son of Blob does not bubble up as one of the best. Instead, it is a truly baffling movie history footnote you should only watch if you’re as high as Larry Hagman was while directing it. I’m certain this will exclude most humans, but maybe you’re one of the lucky ones? 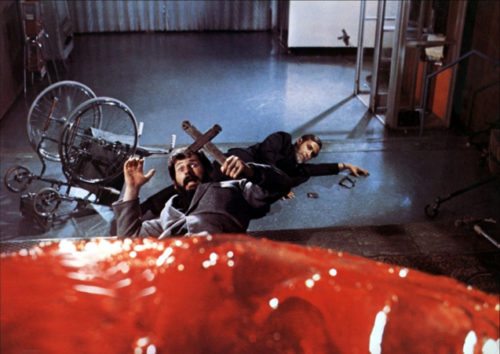 Sorry, pal, but that ain’t no vampire.