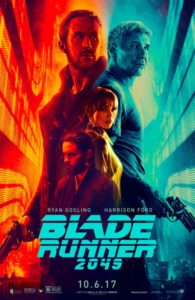 If you’re not put off by its lack of a story, its thematic timidity, and its portentous self-importance, Blade Runner 2049 isn’t a bad sequel. It doubles down on the dreamy futurebleak vibe of Blade Runner, creating a toxic wasteland that’s both distinct from and reminiscent of the original in a pleasingly nostalgic way. And, on the off chance the visuals by themselves aren’t enough to bring you back to 1982, Hans Zimmer is on hand to blast a Vangelis-esque soundtrack straight through the back of your head. Some bleeding may occur.

It’s a shame, then, that the story, written by Blade Runner co-scribe Hampton Fancher and Michael Green, barely exists. There are those who carp about the original being slim, storywise, but there’s still a story being told. Every scene pushes it forward, however languidly. It’s a noir and Deckard is the detective. He’s got replicants to hunt down and a lesson about what it means to be human to learn. Blade Runner was not a financial success when first released, and its meditative pace was no doubt a factor. But so long as you can handle a slow, atmospheric movie, what’s not to love? Blade Runner is Blade Runner. It’s defined the look of the future in film for 35 years. It’s a unique masterpiece.

Blade Runner 2049 is about an android who pines for a soul, told in a way that undercuts drama and tension in favor of atmosphere. Director Denis Villeneuve appears more interested in capturing the feeling of Blade Runner than in digging deep into character or story.

Maybe the following contains spoilers? It’s hard to say. As the movie opens, we learn that K (Ryan Gosling) is a new kind of replicant designed to follow orders. Not like those pesky Nexus 6 replicants who went rogue all the time, demanding more life and whatnot. K is a blade runner, still hunting down rogue Nexus generation replicants. We meet him offing one posing as a farmer. Hidden on the farm is a box containing the skeleton of a long-dead woman who died in childbirth—a woman who turns out to be a replicant.

Replicants having babies? Egads! It’ll mean the end of the world!

Or so head cop Lt. Joshi (Robin Wright) insists. We have to take her word for it. There’s little in Blade Runner 2049 giving a sense of the world at large. We see vast wastelands and a few people wandering the streets, but there’s no real feeling communicated about what it’s like living in this world, or why it will be upended if it gets out that a replicant had a baby, or why this world being upended would be so terrible. What little of humanity we see seems to be on its last legs anyhow. So we’re told it’s bad news, and we know how movies like this work, robot uprisings and etc., so, sure, no one must know about the replicant baby.

Joshi tasks K with finding the child, now a grown man, and killing it. 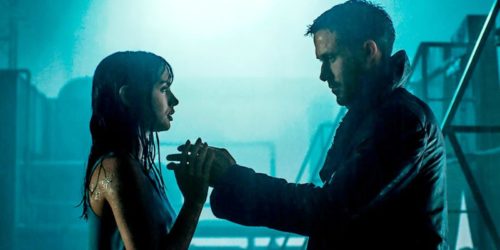 K gets fresh with his hologram

I’m not sure what the filmmakers intended, which in itself feels problematic, but one must assume, here at the beginning of the film, that K is the grown replicant child, that Rachael is his mother, and that Deckard is his father. Yet as obvious as this appears, the movie acts like it’s still a big secret. What follows is something like 90 minutes of K figuring this out.

Except when he’s not figuring it out. He spends a long time at home, talking to his hologram ladyfriend, Joi (Ana de Armas), who thinks he’s a very special fellow indeed. These scenes feel like they’re meant to be weighty with meaning, but it’s hard to care about K’s love for his hologram. She exists as another form of unreal, manufactured intelligence, there to remind K of his diminished status in this world. She has no other function in the story. Unless the story is the atmosphere. Which maybe it is.

Many scenes don’t lead anywhere, story-wise. As with Joi, they only add to the atmosphere. K visits an aging Gaff (Edward James Olmos) in a retirement home. One might hope Gaff would reveal a clue for K to follow. He doesn’t. He says Deckard was a loner and he doesn’t know where to find him. I liked seeing Gaff, but I’d have liked him better if he’d a had a reason for showing up beyond nostalgia.

Jared Leto appears as Niander Wallace, who bought out the Tyrell Corporation and is responsible for the new breed of compliant replicants. Leto plays him as some kind of android messiah with glowing eyes. He has two very long, talky scenes in which he rambles on about god knows what, in a manner more suited to a James Bond movie than Blade Runner. The upshot is that he could sure produce a lot more replicants if they’d just reproduce themselves. He sends his replicant fixer out to steal Rachael’s bones and to follow K.

During his investigation, K seeks out Wallace’s top memory designer, Ana (Carla Juri), who makes memories for replicants. K wants to know if a certain memory of his is the real deal, proving he was born and not built, or if it was designed.

And here the movie cheats. Ana’s answer is great as a writer’s misdirect to mess with both K and the audience, but it’s not the answer the character would have given. It makes no sense she’d say what she says. She sends K on his way convinced he’s Rachael’s baby boy.

Now here’s an actual, definite half-spoiler: K isn’t the mystery offspring of Rachael and Deckard. We learn this late in the film, in a kind of vague, indefinite way that makes you say, “Hmm? What’s that? He’s not the kid? Huh. I guess that really was a mystery I was supposed to care about. Oh well. Too late.”

This is a strange way to pull this kind of reverse. Ideally one would want the mystery to feel like a mystery from the outset. Then spring the first surprise—K is the kid! Holy shit! And then slap us upside the head with the real surprise—K isn’t the kid! The kid is actually—

It’s actually someone we have no reason to care about. Because, I think, we’re not supposed to care about the kid. When we thought K was the kid we were, but now that we know he’s not, we’re supposed to continue caring about K and forget the brave new world of replicant reproduction.

I had a hard time caring about K. Maybe I’m over pretending computers are people too. How many movies do they have to make with this as the theme? I’m beginning to suspect these movies are being by made by A.I. to soften us up for their eventual takeover. In Blade Runner the replicants are desperate for life. They really are more human than human, and that’s the point. Where humanity has sunk into torpor and misery, it’s the replicants whose eyes are open to the beauty of existence. In the sequel, K has been designed to reflect humanity: he does his crap job as ordered and generally feels pretty lousy about life. That he wishes he had a “soul” isn’t enough to make me care much for his fate. 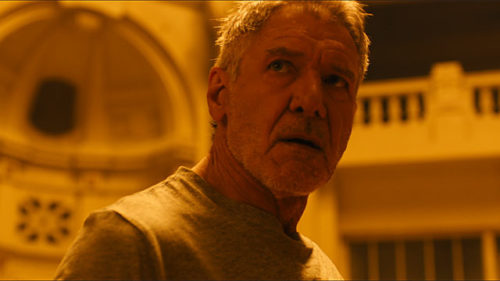 We all know Deckard shows up. Harrison Ford even acts a little. His performance is an improvement over The Force Awakens and The Crystal Skull, at least. Though to be fair, intestinal cancer would be an improvement over The Crystal Skull. Is this Deckard a continuation of the one in Ridley Scott‘s director’s cuts? I.e., is he a replicant? Blade Runner 2049 takes the bold position of ignoring the question entirely. You might think whether replicants can reproduce among themselves or if they need human-dispensed semen would be of particular interest to every single character in the movie, but nobody mentions it. Another cheat.

We meet Deckard in sand-covered, toxic Las Vegas, empty of life but for him and his dog. It’s a visually striking sequence, but there’s no sense of what Deckard’s life is like. The movie only cares that he’s been hiding.

It’s too bad Deckard is a side-character in K’s story, whose story, by the end, doesn’t add up to much. In a way, this movie is Deckard’s story, only Deckard’s story isn’t the one being told. If you see what I mean. Deckard’s search for his child would have made for a far more emotionally involving movie. I know I’m supposed to be touched that boring, rule-following K finally says no to his boss and the replicant revolutionaries by helping Deckard meet his kid, but K’s Pinocchio-like transformation into a real boy, however brief and metaphorical, feels at the end like a shrug, a gag, almost, like the filmmakers wanted to mimic the end of The Road Warrior, when Max realizes he’s been duped into helping someone other than himself. But where The Road Warrior is the height of passion and excitement, Blade Runner 2049 feels like one long exhalation. By the end, all the air has been let out.

It looks pretty, though. Come for the visuals, stay for a nap. I promise Hans Zimmer will see to it you wake up when the credits roll.

5 responses on “Blade Runner 2049: Something Pretty You Can Nap To”