There is good and bad news. Spacehunter: Adventures in the Forbidden Zone is streaming now on Amazon Prime! 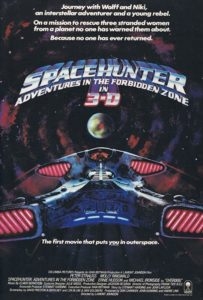 So if you’ve been dying to see Molly Ringwald pretend to be a space tracker who knows how to “brain work”, and you prefer your Han Solo degraded by multiple duplications on VHS tape, you are in luck. A 1983 Canadian 3-D production, for which we have Ivan Reitman to thank, Spacehunter is basically Star Wars, The Road Warrior, and Ice Pirates put in a blender, set to pureé, and then strained through a dirty sock.

Do not ask why the sock is dirty.

It is to 80’s sci-fi what Zero Hour! is to disaster films, that being something that can be translated directly into a comedy with nothing more than an adjustment of perspective. It is film that was much better when they spoofed it lovingly and called it Turbo Kid. 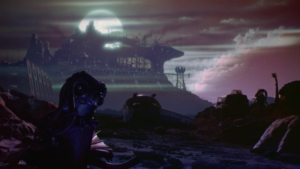 But I watched it, because I’m stupid that way, and so now you have to read about it.

Spacehunter begins with a space-cruise-ship exploding for no interesting reason. All hands are lost, save for a single escape pod containing a trio of Xanadu rejects. Their shoulder pads are bigger and more practical than their pants. So, for that matter, is their hair.

The effects on display here are hi-sterical, even for 1983. It is as if this is the film being made by Bob and Doug McKenzie at the beginning of Strange Brew. But — disbelief aside — our damsels in distress survive, crash landing on a nearby planet, where they are immediately surrounded and captured by off-brand Jawas or something. Honestly, it was hard to tell. 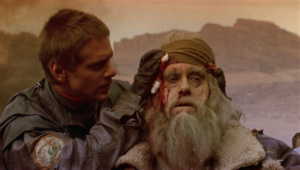 We then meet the hero of our picture, the single-named Wolff (Peter Strauss; credits include nothing you’ve heard of). Wolff is what would become of Han Solo if you took the character straight out of the first act of Solo and had his life play out believably. He’s some sort of space-garbage man with a foxy robot assistant (Andrea Marcovicci; credits include nothing you wish you had heard of) and a spaceship that looks like it came free in a box of cereal. They get the distress call, learn of the extensive reward, and head to the rescue.

This is the highlight of the film, as the distress signal interrupts a space-call Wolff is having with some unnamed fellow — who is most definitely an uncredited Harold Ramis. Enjoy this moment! 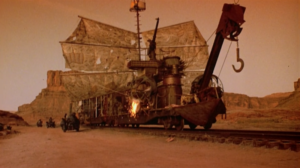 A word here about the look of Spacehunter. Granted, this was shot for 3-D, which justifies some of its grainy darkness. Still. The film is tired. Like, “been working three jobs, and two of them are at the morgue” tired. The production design can barely lift its head to tell you to fuck off. The location scout must have been suffering from gout, because I think 90% of this was shot in the same auto graveyard. The director of photography (Frank Tidy; Stop! Or My Mom Will Shoot, Under Siege, and Chain Reaction) does what he can to spice things up by using the same orange filter on everything. I suppose this doesn’t hurt, but it’s hard to tell.

And then there’s Peter Strauss. Sure, he’s more-or-less a bit-part actor no one’s heard of, but then — so was Harrison Ford. Strauss isn’t terrible, or hard on the eyes, or devoid of roguish charm. He’s just in a film that sucks monkey eggs. His lines and his scenes are strung together like a 4-year-old’s popcorn necklace; as if the production team just grabbed the first thing they saw and stuck it on there. Sorry, Peter — it’s not so much that you deserved better as it is no one really deserved Spacehunter: Adventures in the Forbidden Zone.

Right. So. Wolff lands and tries to rescue the missing women from a space-train. This is a planet that’s been plague-ified and taken over by the mad-tyrant Overdog (Michael Ironside; Turbo Kid), ergo: space-train. Imagine if Mad Max couldn’t find any gasoline and if the Lord Humungous was really taken with the cutting edge technology of wind-powered vehicles on rails and you’re kind of getting the drift. Anyway: there’s an “action” scene in which Wolff strolls about knocking out all comers with a combination of insouciance and body odor. 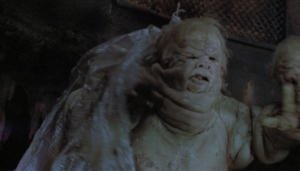 I am the ghost of Christmas puddings past.

Alas, the three Xanadu extras are grabbed by people on hang gliders (duh) and his foxy robot assistant is ruined beyond repair. Naturally, Wolff needs to replace her as soon as possible, so he picks up the scrawny, whiney, petulant Niki (Molly Ringwald). Then, I don’t know, they stumble in between one contrived set of challenges after another, each more mentally deficient than the last. Somewhere in there, Ernie Hudson shows up as a rival / friend and there is some extremely natural and impressive banter. 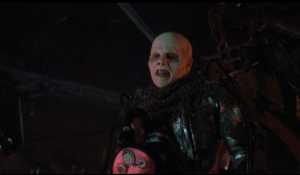 Get yourself to Mars.

Are you bored yet? I am. And I haven’t yet told you about the gribbleys in fat suits, the mermaid warriors who are terrified of the giant tapeworm, or — and really, you kind of do need to see this — Michael Ironside as the cyborg letch Overdog. He’s got giant claw arms and terrible makeup and is hoisted about on this giant forklift or something. He’s got maybe a dozen lines and most of them are the equivalent of “nice tits.” It is this fiendish mastermind that controls the entire planet, even though he looks like you could kill him and his whole army of recyclers-gone-wrong with a shrimp fork and a bottle of hot sauce.

Seriously: this is the most pathetic wanna-be strongman I’ve seen since I glanced at today’s headlines. 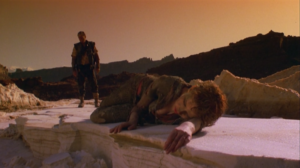 Stay down if you know what’s good for you.

In the end, our protagonists break into a different part of the auto graveyard known as the forbidden zone and rescue the damsels and kill the villains and max out the extremely limited effects budget. Harold Ramis does not have any more lines. Even though she’s proven herself fairly useless, Wolff grows to feel paternally for Niki and invites her to join him collecting space garbage, or whatever he does. Ernie Hudson refrains from saying, “I’m getting too old for this shit.” Michael Ironside’s head blows up, but he’s done a far better job of that elsewhere. Then Han Solo calls and threatens to sue for copyright infringement and the party breaks up.

8 responses on “Spacehunter: Adventures in the Forbidden Zone Is All You Dreamed”