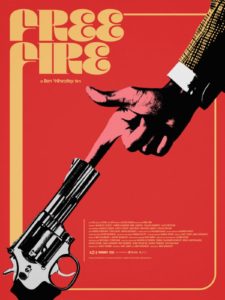 Remember the scene in Raising Arizona where Gale Snoats (John Goodman) fights H.I. (Nic Cage) in H.I.’s trailer? Gale knocks his head into a light fixture, H.I scrapes his hands on the ceiling, Gale smashes his elbow through a window and his fist through a wall, they trip each other, bite each other, Gale beats H.I. with a ruler while spinning him around the room, H.I.’s fingers in Gale’s nose, until finally H.I. is sent flying through the wall. Neither of them lands a single punch.

Free Fire, the latest movie from director Ben Wheatley, is that scene for ninety minutes, only it’s a ten person fight, they’re in a warehouse, and everyone has a gun.

Wheatley and his co-screenwriter (and wife), Amy Jump, like working with small templates. Movies like Kill List, A Field in England, Sightseers, and High-Rise don’t have much in the way of plot, but they don’t need it. These two are story-tellers. Something happens and that something leads to something else, inevitably some combination of funny and grim, and an hour and a half later it ends. In our current movie landscape of the long and the bloated, these weird little stories stand out for their simple pleasures.

Free Fire is about the simple pleasure of a gunfight, and the geniuses fighting it. These geniuses include Chris (Cillian Murphy) and Frank (Wheatley regular Michael Smiley) as Irish IRA members come to America to buy guns to aid their cause (the movie is set in the ‘70s). They meet up with Justine (Brie Larson) and Ord (Armie Hammer), who’ve set up the buy with gun dealers Vernon (Sharlto Copley), Martin (Babou Ceesay), and a couple of other yahoos. 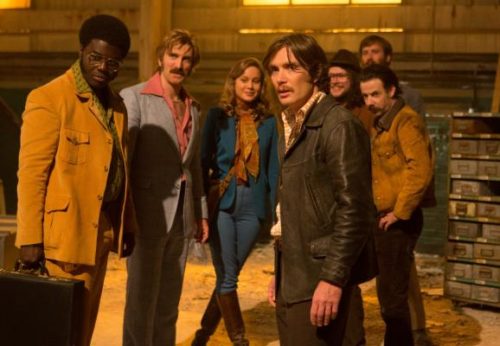 Before the shooting starts

Everything goes well enough until two of the yahoos, one on each side of the deal, recognize each other from an unpleasant incident the night before, unrelated to gun dealing. They do not react well to being in the same abandoned warehouse together. Yelling turns into shooting. And shooting turns into… Well, it turns into the whole movie.

Does it work? It works! I feared it would run out of steam, but it maintains a level of absurdity that never lets up. It’s a lot funnier than I expected, and weird, too. It climaxes (and no, I’m not about to give anything away) with what I’m going to call the best fight involving a moving vehicle since the truck chase in Raiders.

These people may be gun dealers, but marksmen they ain’t. When they hit something other than a wall, it’s an arm or an ass or a leg. It’s a pleasure seeing a gunfight in a movie where it takes this long for someone to actually die. In the meantime characters keep forgetting who they’re shooting at, why they’re shooting at them, and what the hell the point of it all is anyway. 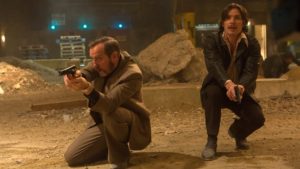 The characters are what makes this work as well as it does. No one stands out as the lead. This isn’t a case where everyone’s trying to be the baddest bad-ass. Ord is the smoothest, Chris has clearly been in the shit in Ireland, but the others all show off varying degrees of incompetence, stupidity, ego, greed, and vindictiveness. Copley as Vernon, the South African gun dealer, gets one of the best character intros I’ve ever heard: “He was misdiagnosed as a child genius and never got over it.” Accents are rife—South Africa, Ireland, Boston—a smart touch in a movie where the inability or unwillingness to understand each other is what leads to all the trouble.

Free Fire is going to be compared to Reservoir Dogs and Tarantino in general, what with its shit-talking crooks shooting up a warehouse, but these are very different directors, and as writers they occupy entirely different universes. Reservoir Dogs is about loyalty and trust and how when it goes wrong, everything falls apart. Which is pretty much what any movie about crooks and a heist gone bad is about. Free Fire, in a sense, takes that trope and shoots it full of holes. By its end we understand there was going to be an issue of trust, of some number of those involved double-crossing some number of the others, but it’s side-tracked right off the bat. 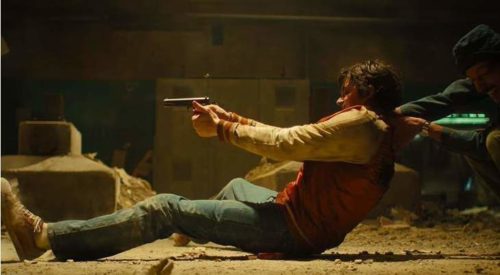 3 responses on “Free Fire Is A Blast”