It feels like just what it is, The Ballad of Buster Scruggs does, six movie ideas none with near enough meat to justify 90 minutes, left to gather dust on whatever shelf the Coens set aside for such squiggled notions, then broken out, polished up, and strung together into an anthology film. Which, being made by the Coens, winds up as not such a bad way to spend two-ish hours. Assuming your notion of entertainment is to sit back and be both terrorized and amused by the antics of the Grim Reaper. Of course, putting it that way, that’s a notion required to enjoy most of the Coens’ work. 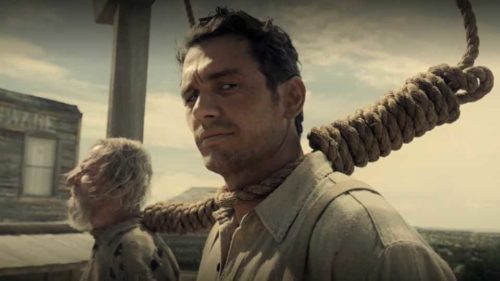 Just another day being hanged

One thing Buster Scruggs makes clear is how able the Coens are to milk atmosphere to tell their stories. Most of these tales don’t go in for beginnings, middles, and ends. They tend more toward brief, atmospheric glimpses tied together by cruelty and murder. Mostly, this is just fine, with one exception, that being the James Franco-starring second chapter, “Near Algodones,” which I found lacking. It seems at first to be a kinda funny bit of business about a guy for whom everything just keeps going wrong, only then it ends before it ever gets going. Mayhap the Coens kept it for the one funny line about hanging Franco gets off just afore he’s hung? Thematically it fits in, as Franco finds the one tiny moment of beauty in an unforgiving world before the rope goes taught. As a whole, Buster Scruggs is a movie contrasting beauty and ugliness, which I reckon is how the Coens look at the old west. 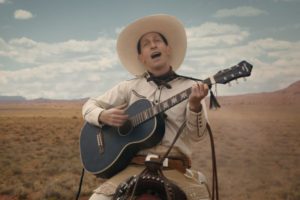 Fortunately, none of the other stories feel as attenuated, even those in which very little transpires. Like the jaunty opening number, which exists for no other reason than to juxtapose, in the titular character of Buster Scruggs (Tim Blake Nelson), a cold-blooded killer and a goofy cowboy singer, laying bare the theme of the stories to come. It’s got funny songs and even funnier gunplay, before ending rather all of a sudden. I could have used a little more of them dueling singers. Adding to the amusement, Scruggs talks like if H.I. McDunnough were in a western.

Tom Waits, who already talks like if Tom Waits were in a western, is so natural a fit for the Coens you can’t hardly believe it’s his first time in one of their movies. He plays a prospecter in “All Gold Canyon” who gets in a spot of trouble, which trouble features a marvelously long, long pause you will enjoy waiting to discover the reason for. Patience, this. The Coens have patience and they know how to use it. This chapter is bookended with some business about nature being briefly disturbed, then returning to normal that I found kind of odd as well as at odds with the rest of the movie, somehow. I dunno. Maybe I’m crazy. 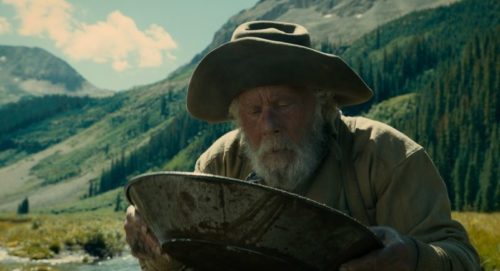 Liam Neeson, too, has he just been too busy hunting down those bastards who kidnapped his daughter/wife/dog/toaster to be featured by the Coens? It’s a pleasure to see this grizzled old Liam not kicking ass. Not that he’s a real nice fellow in “Meal Ticket.” Fact is, he’s a bit on the callous side, as he travels the backwoods towns with Harrison (Harry Melling), an armless, legless actor reciting passages from famous works to the diminishing wonderment of frontier audiences. Their relationship isn’t one of comraderie. It’s a business proposition, and Harrison is only the product. When his novelty wears off, well, old Liam needs to think about finding something new to sell. It’s the American way; the chicken keeps on dancing. I think, in thinking upon it, that this and “All Gold Canyon” are the best of the lot.

“The Gal Who Got Rattled” feels like the longest chapter, or maybe it’s only that it has more of a traditional story feeling. Zoe Kazan plays Alice, a meek woman journeying via covered wagon-train to Oregon. In a movie made of cruel stories, this is surely the cruelest, which saying so is already something of a spoiler, but then again, with all the promise of uncomplicated, joyful love on display in the blossoming relationship between Alice and one of the leaders of the wagon train, Billy Knapp (Bill Heck), you’d have to be a bit thick not to expect the worst. The co-leader of the wagon train, Mr. Arthur (Grainger Hines), says not a damn word until the end, when he says just a few things too many at the outset of one heck of a fight with a band of Indians. 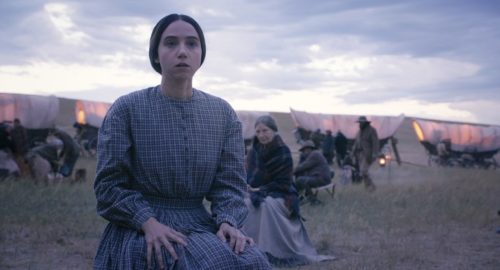 It feels something of a shame that none of these stories are from a Native American point of view. Two chapters feature them as faceless killers, and that’s that. I suppose it’s reasonable if one looks at these tales as being a part of the lore of the American western movie, and of how, historically, the tale of the American west has been told. Buster Scruggs is surely a modern western, but it’s pointedly not a revisionist one.

Five tales of death could only wrap up one way, and so with “The Mortal Remains” do the Coens wrap up Buster Scruggs. Set inside a wagon, it features two jauntily dressed, singing bounty hunters (Brendan Gleeson and Jonjo O’Neill) and three other passengers (Tyne Daly, Saul Rubinek, Chelcie Ross). These three each speechify as to their opinions on, more or less, the meaning of life, while the bounty hunters listen, curious if not amused, and night falls, and the coachman refuses to stop no matter what, and, well, saying more would be saying too much, but it’s a fitting way to end the film.

You can’t beat fate, or so say the Coens in movie after movie, so you’d best laugh at it before it’s done with you. 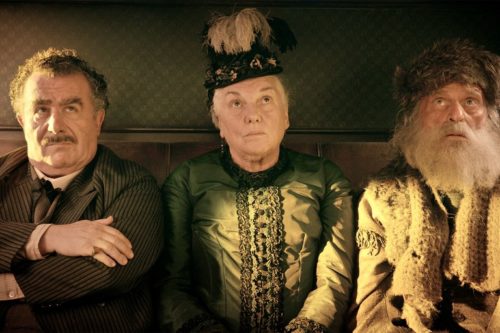 4 responses on “The Ballad of Buster Scruggs, In Which The Coens Dust Off a Sextet of Death”