For your birthday, I give you death. One long, slow, drawn out death.

Or two, actually. One for me, and one for you — and sure, whomever else wants death raise your hand. Or don’t raise your hand. It doesn’t matter. Death for everyone! Whether we like it or not, we’re all going to die.

See, this is Mind Control Double Feature #52, which means the Supreme Being and I have been blessing you with brilliant double feature ideas, once a week, for a whole dang year. It’s our double feature birthday!

We’ve done a lot since our very first film pairing. Do you remember? Yep, #1 was about the jolly fun of World War I. Since then, we ate pancreas, stole an airplane, burned a few nests, and got a very nice sweater. It has been a swell year. Must be time to die.

Or maybe not quite yet? Maybe we’ve still got a little bit of life left in us? Enough for two more films at least? It would be best if you could hang on for two more films. There’s no hurry; we’re all going to die sooner or later anyway. Hopefully not in a kiln explosion or something tragic like that, though. 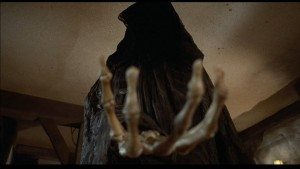 Maybe we can die saving a hovercraft full of baby animals from a trans-dimensional nipple vortex? That would be awesome. Imagine what they’d write on our tombstone!

Death is one of those things that everyone looks forward to. It lures us on. It is the point of our lives, but not right now. The least we can do is aspire to die with some panache.

That’s what the films in today’s double bill have to offer: a couple of solid lessons in how to take your time and die like a champ. 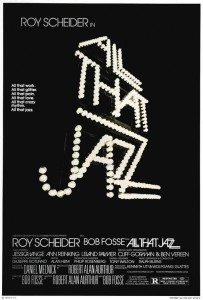 And you thought Roy Scheider had his hands full in Jaws. Bah. That was just a giant shark that tried to eat him whole. In All That Jazz Roy faces off with his own self-destructive impulses.

And there’s no more assured destruction than self-destruction. Hooray death! We are running towards you! Let’s party!

All That Jazz is the musical that made me realize I don’t hate musicals. It is basically an exaggerated, fictionalized autobiography of director Bob Fosse. If you’ve heard that name before, it’s probably because you saw the film of Chicago — based on a Broadway show Fosse originally co-wrote and choreographed. I didn’t see Chicago because Bob Fosse is dead and it looked ghastly horrible. But I hope you liked it.

Fosse was a dancer, choreographer, writer, director, and manic type-A overachiever. He created a style of dance today simply known as ‘Fosse.’ Even though he successfully died in 1987, his work continues to make producers’ eyes go large with cartoon money signs. That’s probably because he didn’t skimp on the sex, in his productions or where ever his genitalia happened to be.

All That Jazz is sexy. It’s as sexy as a long death scene can be. Hooray sexy death! 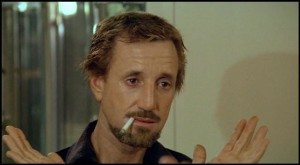 In the film, we watch director and choreographer Joe Gideon (Scheider) work himself to death. He’s trying to stage a Broadway show and simultaneously finish editing his film about a stand-up comic [Fosse had recently directed Dustin Hoffman in the film Lenny, about comedian Lenny Bruce, and was staging Chicago on Broadway]. Gideon’s juggling his girlfriend, his ex-wife, his daughter, and pretty much anything else young and perky that comes his way. Each day he turns his self-destruct dial up a smidgen higher, attempting to persevere along his unsustainable course.

All That Jazz is a musical that sings Joe Gideon to his grave. You know it and he knows it. Death is just around the corner but it’s not here yet so let’s have another roll in the hay.

In All That Jazz, the film that Joe obsessively cuts and recuts captures a comedian riffing on ‘the five stages of death: anger, denial, bargaining, depression, and acceptance.’ Can you guess how life will imitate art in this piece of art imitating life? Will Gideon heed the sage advice of those that love him? Will he do as the doctors prescribe?

No. His job is dying and he’s no slacker. 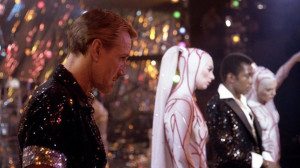 The film unfolds like a piece of music, with interweaving themes and an ‘its showtime’ chorus linking the verses of Joe’s gradual demise. We follow him working, loving, indulging, and progressing through the five stages of death. We also get odd flashbacks to Gideon’s childhood via heavenly scenes in which he parlays with an angelic figure (Jessica Lange). And all the time there’s more Broadway numbers and open heart surgery and eye drops, dexedrine, Alka-Seltzer and all that jazz.

Roy Scheider is in top form here, with the show resting squarely on his shoulders. His Joe Gideon is as egotistical and out of control as the real Bob Fosse who, yes, died of a heart attack not long after All That Jazz came out. The film lost a mess of Oscars to Kramer vs. Kramer — a movie no one watches or talks about today — while this one remains compelling and potent.

Death lies ahead of us all. Five stages or no, it’s coming for you. What are you going to do about it?

Watching another film would be an acceptable answer. 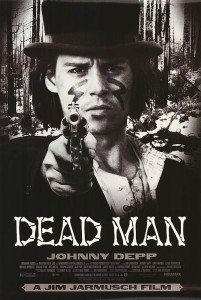 The Supreme Being already wrote an excellent poetic ode to Jim Jarmusch’s brilliant Dead Man, but that doesn’t keep it from being the perfect film to pair with All That Jazz. Plus, while you may only live once, you can watch movies and/or die over and over again.

I learned that from video games.

Dead Man is another long death scene. How long isn’t definitively clear, but I’m in the camp that says Johnny Depp — playing William Blake (not that one) — is deceased from the first moments of the film. In those final first seconds, his meek accountant character travels by train out to the ghastly Western frontier town of Machine. There a job awaits him.

But his job is dying. His job is accepting death. 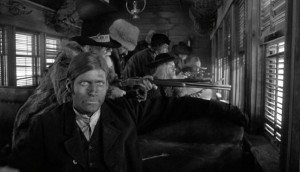 A train took me away from here, but a train can’t take me home.

As Blake watches the wilderness devour the landscape outside the train windows, Crispin Glover appears like a sooty-covered survivor of hell to warn him off. William continues on, as do we all. There is no escaping death. Especially when you’re already dead.

In Machine, things do not go so well. He is horrified by the bleak lawlessness there, refused employment by John Dickenson (Robert Mitchum), and is shot in the chest. Poor William Blake’s wounds will never heal. 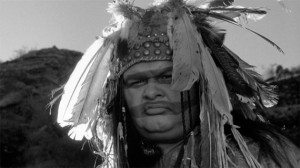 You will notice that this Native American is not wearing an entire dead bird on his head like some stupid fucking white man pretending to be a Native American.

Neither will yours. Cheer up, though! The road to death is busy with interesting people, and only some of them are cannibals. Blake connects up with a Native American named Exaybachay (meaning “Nobody” or “One who speaks loud, saying nothing”; played by Gary Farmer) who thinks him a reincarnation of the poet William Blake. He decides to help escort Blake’s spirit to its proper place in the after world. They’re chased by bounty hunters and — did I mention? — they die. Of course. Everyone dies. Absolutely everyone. Including you.

Dead Man isn’t really a narrative film; it’s more of a poem. A hallucinogenic ode to the unknowable other. It’s scored by Neil Young, who thrashes his guitar like it’s a wild animal attempting to claw his face. The whole thing is shot in gorgeous black and white by cinematographer Robby Muller and edited, by Jay Rabinowitz, as if it is a series of memories from a past life. 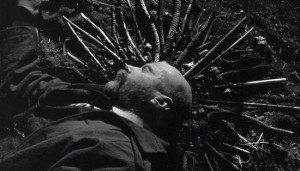 And who knows, maybe it is? Maybe we’re all dead now, just remembering?

I hope not. We’ve got our second year of double features to watch, starting next week.