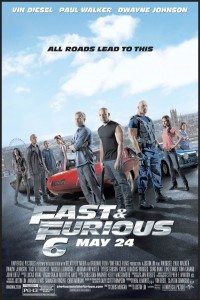 They say you cannot have your cake and eat it too, but they are incorrect. You can make it happen if  — after you eat your cake — you sick it up all over yourself. That way you still have your cake!

This masticating and regurgitating strategy appears to be what Fast & Furious 6 has settled upon in its attempts to rejigger the franchise. It does not work out so well.

After four films about lugs and babes who drift in between law enforcement and criminality — mostly in support of their illegal street racing habits — Fast Five shifted gears.* It focused on its large cast and let the racing rot. Toretto (Vin Diesel), O’Conner (Paul Walker), Mia (Jordana Brewster) and the accumulated snowball of incidental cast members all, overnight, with the help of a marginally talented screenwriter, became specialist criminals capable of pulling off the world’s most audacious heist.

Audacious is right. They made Diesel’s Toretto the brains of the operation! It is hard to imagine a move more audacious (or, surprisingly, fun). By the time Fast Five‘s action set pieces peaked with two Dodge Chargers dragging a full-sized vault through downtown Rio, your hat was off. On top of this crackling action, Dwayne Johnson’s super cop character Hobbs spiced everything up with scintillating and wholly unintentional comedy. I left eager for more audacious preposterousness. 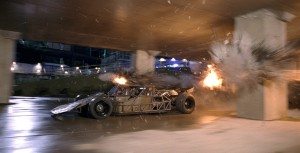 I simply want to blow up the world. Is that so wrong?

But Fast & Furious 6 gets greedy. It wants to wolf down its cake and still retain it. It pushes too far away from anything recognizable as fast or furious, falling into generic action tripe territory. It spits up pre-chewed character and plot so thoroughly the result resembles a technicolor rainbow projecting across a porcelain throne.

At the end of the previous film, O’Conner and Mia basked in their Mediterranean hideaway, expecting their first child. Toretto was shacked up with Elena (Elsa Pataky), a Brazilian cop who was touched by his honesty, or muscles, or $100,000,000, or whatever. The other gang members were scattered around the world, ducking and weaving from Hobbs, who’d sworn that he’d bring them all to justice — taking his unstoppability as seriously as he took every single other thing in existence.

Furious Sicks throws all of that away. All of what you learned and knew about these people and their situation becomes half-digested slop down the front of your shirt. The characters names remain the same, but all else gets puréed. 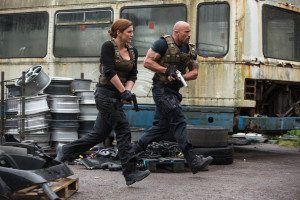 Gina Carano does her own stunts. She’s hot like that.

A transparent paste attempts to adhere Furious Sicks to a central motivating idea of ‘family first’ but clearly no one’s heart is in it. How can a film about family ties begin with a new father abandoning his wife and infant? Do these people even understand what the word ‘family’ means? Never mind, for Hobbs has appeared on Toretto’s doorstep, saying ‘finding you wasn’t very hard,’ and this new insult makes you forget the first one. They’ve completely reversed the franchise’s foundations twice in under a minute.

Hobbs could have found and arrested Toretto but didn’t?

Who are you and what have you done with Hobbs?!?!

Forget it, because you’re already rolling your eyes at the next development. Whomever this shoddy Hobbs-substitute is has come to say that a) Letty (Michelle Rodriguez) has returned to life; b) she is somehow involved in stealing components to build a super bomb for super terrorists; and c) Hobbs needs Toretto and his whole gang of lugs to save the world (except the Latinos, whom I guess weren’t that important, or Elena or Mia, who, uh, pull baby duty due to possessing lady parts? Family: it’s really important). Awkward scenes in which the women approve their own desertion do little to make this shit sandwich go down easier. Or make it come back up again all over the front of your shirt a minute later easier. Eat your cake! Have it too!

As for Letty being returned to life, that sort of thing may be par for the course for a film like this, but I thought the ‘I’ve got amnesia’ plot device died when Dallas went off the air.

It didn’t. Letty has amnesia and must be rescued at all costs because, of all your family members, the assumed dead ex-girlfriend who likes to shoot you is the most important. Toretto gets the gang back together, even though most of them never met Letty, to save her and stop master criminal Owen Shaw (Luke Evans) from driving his Batmobile recklessly through London.

There are so many things wrong with this plot it makes me discouraged about humanity’s chances of survival.

Okay fine. We’ll have one race.

In Fast Five, writer Chris Morgan and director Justin Lin gave their characters just barely enough justification for doing and being what the film demanded of them. The score was big enough. Loyalty held enough weight. The threat of Hobbs loomed like a head full of head rocks and the action, well, it was engaging and believable enough that you let your disbelief lapse into an alcohol-induced stupor.

Nothing in Furious Sicks is nearly as compelling. Nothing makes any sense, not on a plot, character, or even physical-laws-of-the-universe level. The characters are simply not the same individuals who used to live to race cars. Why these clowns would be called in to stop a terrorist is beyond quizzical, let alone why they’d accept such an assignment.

Wait. Let’s have a car driving out of an exploding plane which is flying out of a melting planet! Too much?

Unlike the action sequences in Fast Five, Furious Sicks lets darkness and chaotic editing cover for depressing digital nonsense. Yes, everything is bigger and louder but at the expense of baseline believability. By the time the gang is battling a tank on a divided bridge, either your eyebrows have raised themselves clear off your head or you believe that Hobbs is likely to knock on your door to invite you to save the world from Armageddon with your head rocks and your Cheetos-stained fingers.

It’s depressing. This franchise had finally hit its stride, and now it’s writhing on the ground pressing the button on its Medic-Alert bracelet. Toretto is no longer Toretto, but some James Bond motherfucker. Hobbs isn’t a relentless force of law, he’s second fiddle to Vin Diesel’s massive brainpower — a sentence that makes me question my grasp of reality. O’Conner would rather put himself in prison than raise his son. Characters who just wanted to open their own garage end up making nitrous oxide powered grappling hooks so they can swing cars from planes that are taking off down the world’s longest runway.

Nitrous oxide? Do their grappling hooks run on a combustion engines? Or maybe they need some dental work?

Even poor Mia. When kidnappers storm her house, she lets Elena and her baby escape before deciding inexplicably to run back into the house for prompt abduction. Does Elena then call Toretto to alert him to his sister’s kidnapping?

Because these aren’t even characters. They are just action figures that Lin shifts between overblown action scenes regardless of what might make the faintest inkling of sense. 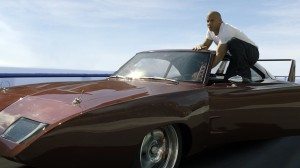 Feel the ball, Danny. Be the ball.

There is a scene in Furious Sicks in which Toretto drives his car into a guardrail so that the impact might fling him through the air, where he can then grab Letty — who has been thrown from an overturning tank — and then land underneath her, safely, on the hood of a car on a different bridge. When she asks him how he knew there’d be a car there to break his fall — as if anyone thinks of a windshield as a good crash pad — he replies, sagely, “I didn’t.”

Toretto is a mystic. He is willing to sacrifice himself for family, even if that family just shot him in the shoulder. Either that or Toretto is an idiot. He should have stayed home safe with his sister. He should have insisted that O’Conner be a father to his son.**

And I should have stopped watching these films after Fast Five.

For as much as I enjoyed Fast Five, I suffered equally through Furious Sicks. After watching 2 Fast, 2 Furious and Tres Fast, Tres Furious I would have thought you couldn’t get any dumber. I was wrong.

I let the excitement go to my head. It is a mistake I won’t make again until Fast & Furious 7 comes out.

** In case you were unaware, actor Paul Walker died recently when the speeding car he was in lost control and slammed into a light pole. It is a tragedy that Vin Diesel wasn’t there to drive his car into a guardrail so that the impact might fling him through the air, where he could then grab Walker and land underneath him, safely, on the hood of a car, saving Walker’s life. Stuff like that happens all the time, apparently.