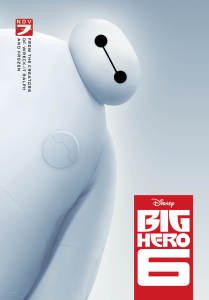 I laughed a lot during Big Hero 6, the latest animated feature from Disney.

I also removed my hat out of respect for the film’s refreshing characters — chiefly the gang of robotics geeks who back up the film’s young protagonist, Hiro Hamada (Ryan Potter).

T.J. Miller, easily the best part of Transformers 4: The Age of Extinction and one of the highlights of Silicon Valley, plays Fred with the sort of addled glee that makes one recall a young Gene Wilder. The rest of the multi-racial crew bucks types and trends and feels fairly fresh for kids’ fare like this. Damon Wayans Jr.’s Wasabi, in particular, hits his mark well.

While the voice talent gets big billing, what’s more impressive in Big Hero 6 is the work of the artists at Disney. Few will remain unimpressed by Baymax, voiced by 30 Rock‘s Scott Adsit, but most will overlook how individual and authentic the supporting characters appear. This artistry extends into Big Hero 6‘s location of San Fransokyo and it’s blending of American and Asian styles. 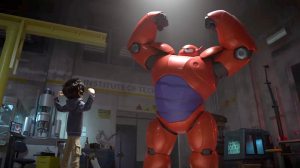 Although I saw Big Hero 6 in 2D, the film’s set piece action sequences had me knocked back as well. Disney’s animators have gone Pollack with movement and color to fabulous effect. You, and your kids, will love it.

Where Big Hero 6 falls flat, however, is in its story. The virus of Marvel Studios creeps into the corners of this picture and the result tastes slightly rancid.

Hiro Hamada is a teenage robotics prodigy, living with his university-age brother and his aunt. Hiro uses his talents to win robot fights — and this opening sequence slays. From here, the film’s thread feels increasingly forced. Coincidence and worse tosses Hiro from 14-year old rebel to, by the end, captain of a superhero squad. For characters as well-considered as these, it’s rough to see them set aside their personality to do what the plot orders.

Hiro ends up inventing something of incalculable worth — microbots! — and then loses both them and his brother to tragedy. He finds himself instead stuck with Baymax, his sibling’s robot medic marshmallow man. When the film’s lamely motivated villain rises up in control of Hiro’s microbots, what does Hiro do? 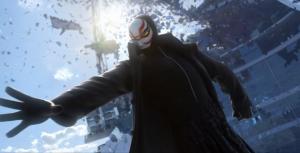 Yes. Of course, he builds more microbots and gives the villain what-for. Or, more easily, he builds himself another control helmet and overrides the bad guy’s usurped command. Or, sigh, he convinces a bunch of exceptionally talented nerds to become superheroes despite their complete lack of preparation for such a calling. Their struggle to transition makes it into the plot, briefly, but it still makes as much sense as Stan Lee’s cameo.

Meaning it makes sense economically, if you believe that forcing films to fit into a franchise makes more sense than letting them be worthwhile on their own. For most of what’s wrong with Big Hero 6 is the superhero stuff and the immeasurably lame connection to the Marvel Cinematic Universe. If Disney had set all of that stuff aside and let Big Hero 6 go in the direction its characters demanded, it might have been pretty brilliant. 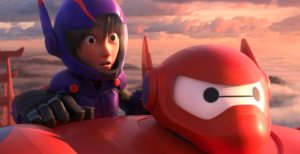 While Big Hero 6 is based on a comic book team of the same name, a cursory read of the Wikipedia article suggests no one in the story department gave a good goddamn about what that book contained. Baymax, in the comic, is some sort of synthetic dragon. The team is comprised of the same sort of preposterous superheroes that coat today’s summer films like toxic shellack.

Disney bothered to make these characters and this world so much more fascinating. Then they chained it to the Marvel leviathan and let the beast drag it to the bottom.

Even so, Big Hero 6 remains a pretty great family film. It makes enough sense, looks fantastic, and makes you laugh and thrill and tear up, too. It’s a shame that if they make a sequel it’ll be about superheroes. I can’t imagine anything less exciting.

3 responses on “Big Hero 6: the Best and Worst of Disney”