If I could offer only one piece of advice to future generations, it would be this: When a meteorite crashes in the woods outside of town, DO NOT poke it with a stick! It’s not full of candy or money or Star Wars action figures. It’s full of deadly space parasites, and they’re going to eat your face. 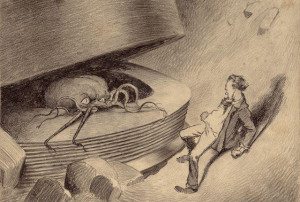 War of The Worlds: don’t poke it!

Evil aliens crash-landing in the woods is a wonderful trope of old-timey science fiction. Small towns infected with space-goo feels right, doesn’t it? Ever since H.G. Wells wrote The War of The Worlds (in 1898) we’ve expected the martians to land someplace small and out of the way, where simple folks’ simple ways will doom them to death or enslavement or, perhaps, invasive surgery.

Two of the most famous early cinematic examples are It Came From Outer Space (’53) and The Blob (’58), in both of which meteorites housing alien life crash outside small towns. The Blob is the more iconic of the two, with two teenagers making out on lovers lane seeing a streak of fire over their heads, and, naturally, going to investigate. But a farmer gets to it first and—yep—pokes it with a stick. A blobby bit of goo leaps on his hand. Things go downhill from there. 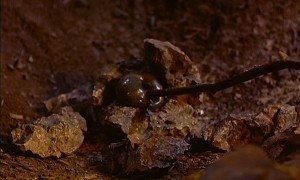 Writer/director Fred Dekker borrowed The Blob‘s iconic opening and cooked it up with a hundred other classic sci-fi conventions to make his low-budget ‘86 horror/comedy, Night of The Creeps. He even provides an absurd prologue aboard an alien spaceship, where a bunch of snarly-faced rubber doll people run around shooting poorly aimed laser beams at one of their crew, who’s intent on ejecting into space an “experiment” the others would rather he didn’t.

The experiment, a metal cannister, arrives on Earth in ’59, streaking over the heads of a college couple making out on lover’s lane. They investigate. The fella pokes it with a stick, it cracks open, and a slithery slug creature leaps into his mouth. Meanwhile, his date, waiting in the car, is hacked to pieces with an axe by a local escaped madman. One of those nights, I guess. 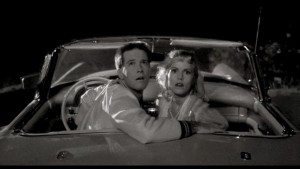 Look at that meteor go! Now find me a stick.

Years later, in the present, then known as 1986, two loser college kids, Chris Romero and James Carpenter, hoping to join a frat to impress pretty girl Cynthia Cronenberg (yes, everyone in the movie is named after a famous horror director), steal into the morgue to nab a dead body for a prank, but accidentally wind up in the cryogenic freezing room and release the not-exactly-a-corpse of the dude from the intro.

Frozen guy wanders about naked to the sorority house his date lived in long ago, where his head splits in two releasing a whole bunch of speedy alien slugs. 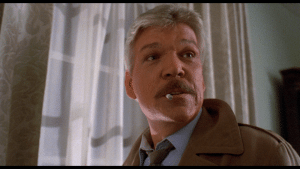 The good, albeit drunk, cop

Tough guy cop Ray Cameron (Tom Atkins of Escape From New York and Creepshow (another movie in which a farmer pokes a deadly space meteorite with a stick)), desirous of being thrilled, investigates. Turns out he used to date the girl killed with an axe, he was a rookie cop the night of the murder, and on the sly he tracked down the madman, shot him, and buried him behind the sorority house.

What, you’d pick someplace else to bury him? And I suppose you wouldn’t poke a meteorite with a stick, either, would you?

Needless to say, the dead and buried madman from ’59 is neither dead nor buried. He’s full of deadly alien slugs, which leap into peoples’ mouths and turn them into zombie hosts for yet more breeding slugs. And so on. 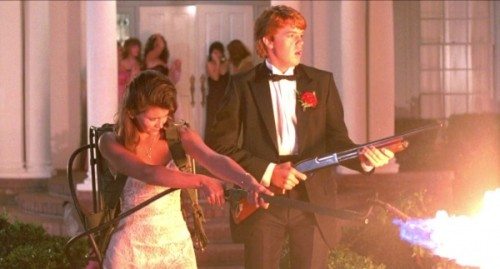 It’s a fun movie. Definitely on the cheap side when it comes to things like, oh, say, acting and dialogue and story. But the slug things look cool, and there’s zombie people and naked sorority girls and really everything you’d want in a nutty horror flick.

Writer/director James Gunn claims he hadn’t seen Night of The Creeps prior to making Slither (’06), but it’s no wonder people accused him of outright theft, not realizing that horror stretches back a bit further than ’86, and that Dekker himself was purposefully repurposing clichés for Creeps. 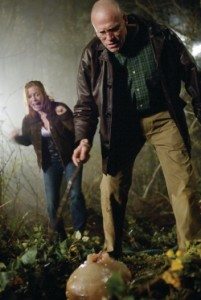 Go ahead. Poke it. You’ll be fine.

Gunn opens Slither with a meteorite crashing outside a small town. Two lovers, married man Grant (Michael Rooker) and a girl he shouldn’t be fooling around with, Brenda (Brenda James), find it, and Grant pokes it with a stick. A little centipede-like alien leaps into his stomach and crawl up and into his brain. It takes control. It’s got a plan.

Was Gunn ripping off Creeps here? Hardly. He was reaching all the way back to The Blob (not to mention Invasion of The Body Snatchers). As for for the slug creatures soon to come, he was inspired by what must have likewise been Dekker’s inspiration: David Cronenberg’s first feature film, from ’75, Shivers (or, as it was known in the U.S., They Came From Within, which let’s be honest is the single greatest renamed-by-a-distributor-movie in the history of cinema, not only because it’s a wonderfully evocative title, but because it would go on to sum up Cronenberg’s entire horror ethos). 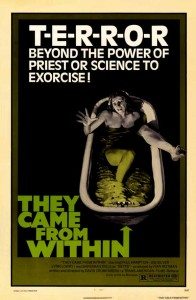 Shivers takes place in a modern apartment complex, the Starliner Towers, located on a kind of island apart from the rest of the world. An enclave for the upper/middle class. One might guess Cronenberg was influenced in locale by J.G. Ballard’s novel High Rise, but it was published the same year. Like minds must think alike.

Cronenberg being Cronenberg, there are no alien meteorites in Shivers. His horror comes from within. The movie begins in media res, with an older man assaulting and killing a teenage girl in the towers. Once dead, he slices open her chest, pours in some kind of acid, then slices his own throat. 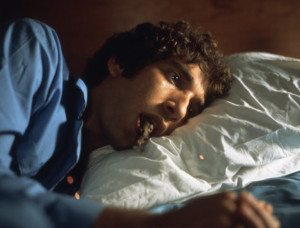 The Starliner doctor, Roger St. Luc (Paul Hampton), noting the strange movements in his patients’ stomachs, investigates and discovers that the murderer/suicide was a renowned bio-chemist working with a partner to create parasites to replace injured organs in human beings. Swell idea, huh? Put a parasite inside you, it eats your failing liver, then replaces it, feeding on your blood. What could go wrong?

What could go wrong is the scientist in question deciding humanity is a disease requiring elimination, in his spare time designing a parasitic venereal disease/aphrodisiac parasite, and testing it on a young girl. Granted, it’s just what I’d do, but in this instance, plans go awry.

The parasites prove overly aggressive, so the scientist kills her and burns out the slugs growing in her stomach before killing himself (the movie’s opening scene). What he fails to take into account is the aphrodisiac nature of his creation. Seems the young lady was screwing half the men in the towers.

The venereal disease takes over, and soon everyone in the building is a mad, frothing at the mouth, sexually crazed zombie killer, full of squirming sex slugs.

The nice people enjoying one another

Gunn evidently loves old Cronenberg movies. Shivers and The Brood were much on his mind when crafting Slither. Once Grant is infected, he impregnates Brenda with his wormy stomach tentacles. She becomes unbearably hungry. He feeds her meat. Lots and lots of meat.

Without giving it all away, let’s just say that, eventually, she hatches, and out come the alien slugs, squirming all over with CGI slickness. Personally, I much prefer the practical slug monsters in Shivers and Creeps. To its credit, Slither uses practical monster effects for many of its other scenes. The final Grant-beast owes a large debt to the creatures in The Thing and From Beyond (and, I think, does them justice). 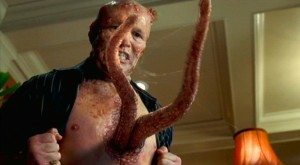 Grant tries to make friends the only way he knows how

As in Shivers and Creeps, the slugs in Slither leap into their victims mouths and turn them into ravening zombies. However, in a nice touch, all of the zombies are Grant, or rather AlienGrant. He is one alien being, and the slugs, his children, are in essence another part of him.

In another strange parallel, Gunn named his characters after famous horror directors just like Dekker did. Both filmmakers do a nice job not making outright spoofs of their movies. They really were working on similar wavelengths, paying homage to classic horror movies, but loving them as much as laughing with—not at—them. Both movies work as horror movies regardless of the humor. They’re not mocking horror tropes, they’re reveling in them. 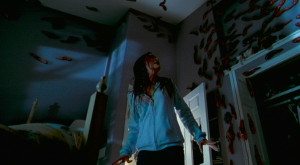 Gunn made his directorial debut with Slither. Which makes sense, as he got his start writing Tromeo & Juliet and other films and web series for Troma. He also wrote Scooby-Doo and the unfortunate Dawn of The Dead remake. Which I realize some folks quite like. Me, not so much. Of late his star has risen considerably as the writer/director of Guardians of The Galaxy, a movie I was apparently alone in finding awful.

But Slither? An awesome little horror flick. Smart, funny, well paced, in love with its influences, plentifully goopy and delightfully weird. About the only negative thing I could say is that if anything it’s too slick. There’s nothing raw about it. I suspect Gunn was being especially careful as a first-time director, making sure every shot looked right, cleaning up his effects, etc. It’s a slick movie, mostly in a good way, but maybe it loses a little immediacy, a little danger, in being so professionally executed. 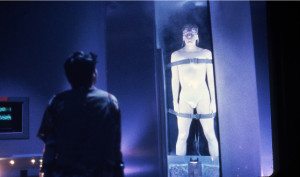 Night of The Creeps is not anywhere near as polished. It lumbers and shambles all over the place. The acting is straight out of a cheesy ‘80s straight-to-video comedy. With the exception of Atkins as the cop. It’s obvious he loved his role. He really sinks into it. But of course its sloppy absurdities are often what’s most fun about it. It fully deserves its status as a beloved cult flick. I can’t believe I didn’t see it in the ’80s. I watched every horror movie in existence! How did I miss it?

Shivers, the one non-comedy of the three, is by far the most disturbing. Is it a statement on modern living? On the sexual revolution? Cronenberg wanted to create shocking images and let viewers come to their own conclusions about meaning. As usual with his movies, some folks found it appalling and despicable. Other folks rather liked it. Like me. There’s a simplicity and directness to Shivers that’s especially compelling. Its cheapness works in its favor. Cronenberg’s original title was Orgy of The Blood Parasites, but he figured it was a little too tongue-in-cheek sounding. There are no tongues in cheeks in Shivers. Only parasites.

One of the most memorable scenes in Shivers has actress Barbara Steele (the one star in the movie, having appeared in such classics as Black Sunday, The Pit and The Pendulum, and 8 ½) slipping naked into a bathtub. One of the parasites crawls up through the drain and attacks her exactly where you think it does. Gunn directly imitates the scene in Slither, though he doesn’t go as far as Cronenberg—he has his alien slug leap into the victim’s mouth. Gunn isn’t aiming to to disturb in the profound way Cronenberg is. He’s aiming to entertain.

Shivers is the best movie of the three. It’s cheap and simple, but it’s Cronenberg; there’s something powerful under its surface. The imagery is disturbing in a way hard to process. It gets under one’s skin in a way one wishes it didn’t.

But we don’t always want to be deeply disturbed, do we? No. Sometimes we want to revel in the horrifically goofy. Sometimes we need Slither and Night of The Creeps. And for that matter, The Blob. 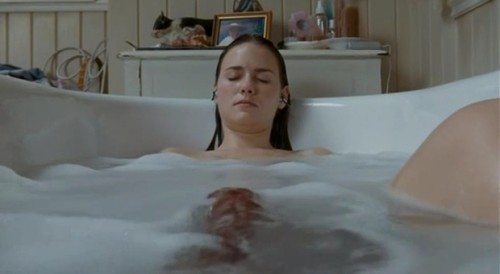