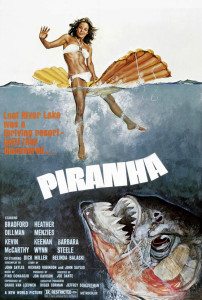 Joe Dante’s 1978 Jaws rip-off, Piranha, is one fine kettle of fish. Many, including Spielberg himself, have called it the best Jaws rip-off of them all, and in an era when deadly animal movies were rife even before the success of Jaws, there were many, many rip-offs. (Spielberg thought so highly of it that he convinced Universal not to pursue an injunction against its release when it was to open the same summer as Jaws 2.)

Until recently, I’d never seen Piranha. I think I thought I must have, so I never actually got around to doing so for real. Which is terribly strange, seeing as it’s directed by Joe Dante and written by John Sayles (his first credit). Both were young and working for Roger Corman, famous for low budgets and capitalizing on, well, on whatever was at hand to capitalize on. 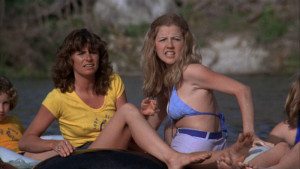 Piranha works as well as it does because Dante and Sayles are funny guys well aware of what they were making. The plot is essentially identical to Jaws. The only thing lacking is well-written characters and stylish direction. No offense to Dante, he’s a fun director, but he’s no match for the movie-obsessed stylization of early Spielberg. Dante’s a fan of cheap gags, like a woman playing a Jaws videogame, another reading Moby Dick on the beach, a lazy cop watching The Creature That Challenged The World on TV.

I enjoyed Piranha (and even got to see it on 35mm, in a lovingly abused and faded print), but I’ll be honest: in the realm of Jaws rip-offs, I like The Car better. 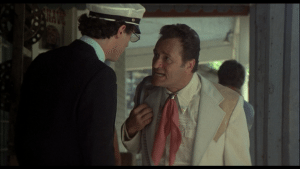 Never tell Dick Miller his guests are being eaten by fish

Still and all, Piranha is a fine piece of knowing trash. The cast is wonderful. Corman regular Dick Miller plays Buck Gardner, the developer whose new water park will be the site of the piranha apocalypse. Paul Bartel plays Dumont, the sadistic girls summer swim camp director, whose camp will be the site of the other piranha apocalypse. Kevin McCarthy of Invasion of The Body Snatchers fame plays Hoak, the mad scientist left alone in an almost-but-not-quite-shuttered mountain hatchery to genetically alter piranha into cold-and-salt-water loving, fast-multiplying monsters for the army. If only they hadn’t installed a drain that emptied out into the river! Barbara Steele is Dr. Mengers, the evil fish expert. Keenan Wynn is the drunken, kindly old man destined to be eaten the way all drunken, kindly old men are eaten in horror movies. Sayles shows up in one brief scene as a very stupid soldier. 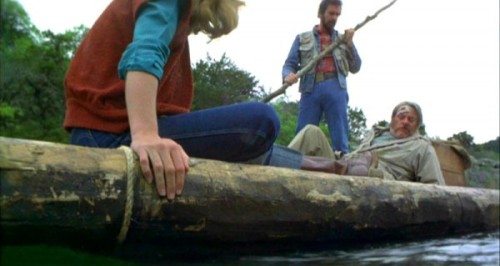 Drifting down the infested river

Hoak, the scientist, gets all the blame for the monsterous piranha, but it’s investigative reporter Maggie McKeown (Heather Menzies) and drunk loner Paul Grogan (Bradford Dillman) who capriciously bust into the research facility in search of two missing teens and drain the tank, releasing the monsters into the river.

While trashing Hoak’s office, Maggie and Grogan fail to notice a certain deadly piranha watching them. It’s not in a tank. It walks on the desk in glorious stop-motion, a dead-ringer for Harryhausen’s Ymir from 20 Million Miles to Earth. I loved its two brief moments on-screen. Dante’s plan was to have it show up in later scenes, each time larger, but he didn’t have the money. Alas. 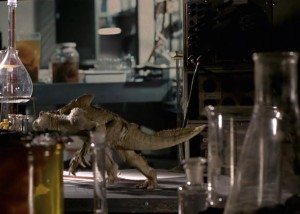 The effects are limited, as one would expect of a Roger Corman production. One brief shot of piranha swimming at the camera is used over and over again. When the fish are gobbling up victims underwater, mostly what’s visible is a lot of blood and quick cuts of angry fish-heads and chewing teeth. But considering the budget limitations, the effects, created by, among others, future masters Phil Tippett, Rob Bottin, and Chris Walas, aren’t so bad. Or in any case, they’re cleverly deployed.

One let’s say “fun” aspect of the movie is how much carnage is involved. A few people are chewed up one at a time, as you’d expect. But once the deadly fish hit the girls summer camp, it’s a full-on feeding frenzy, including little girls eaten alive. And then the ending, the water park attack, is one long and gruesome massacre, ending with bodies of the dead and injured laid out on the grass in a scene straight of a Vietnam flick. 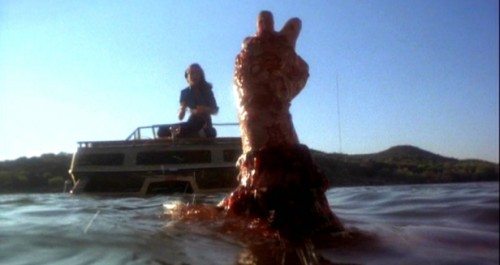 Another laugh is how the piranha are defeated—by releasing massive amounts of pollution into the river. Hooray! Death to everything!

Dante must have gotten a kick out of making this, though while editing it he worried he was making the worst film of all time. A reasonable fear. Piranha certainly isn’t a good movie. It’s good trash, is what it is. A perfectly noble thing to create. But Jaws it ain’t. 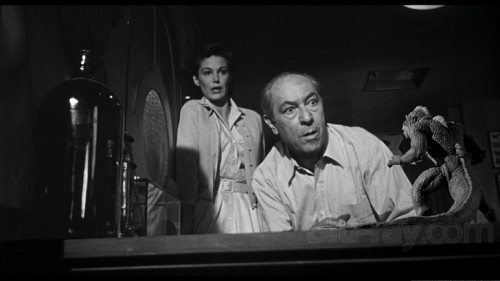