Some beloved movies from one’s childhood shine when revisited years later. Dreamscape (’84) is not one of them. 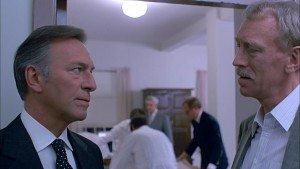 Damn. I’m sure I had something else to add. Okay, for one thing, there’s like 10 minutes of dreaming action in the movie, leaving 86 minutes of sheer boredom. Dreamscape is a remarkably boring movie. If not for the actors, it’d be dead on arrival. But lucky for Dreamscape viewers, Christopher Plummer and Max von Sydow are on hand to fool you into thinking you should care. When their names came up in the credits I thought, “My god! Two evil bad guy geniuses in one movie? This is going to be amazing!” before remembering that von Sydow plays nice guy scientist, Dr. Novotny. Plummer plays shadowy government spook, Bob Blair, and he’s marvelous. I don’t know if anyone does pure malevolence as well as Plummer. He’s so quiet, so still, and so very, very threatening. 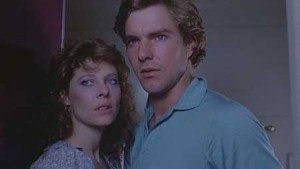 As Alex Gardner we’ve got Dennis Quaid, on the verge of being a big star and leading man. Unless you count 1983’s Jaws 3-D as his break-out leading man role. Which you might. Few movies are as good as Jaws 3-D. Quaid gives Dreamscape all the insouciance and boyish charm he can muster. His love interest is Novotny’s assistant, Jane DeVries, played as a perfectly believable human being by Kate Capshaw, thus proving that her performance in The Temple of Doom may be blamed solely on Spielberg, who at least married her by way of apology.

Speaking of Temple of Doom, Dreamscape features a scene in which evil dream assassin Tommy Ray Glatman (David Patrick Kelly), while invading the President’s dream, grows metal claws and rips out the bloody heart of a train conductor. 1984 was a banner year for hearts being torn from chests, with Dreamscape, Temple of Doom, and The Terminator. Am I forgetting any others? 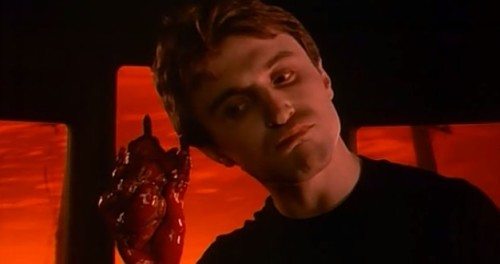 Also featured is a classic car-smashing-through-phone-booth scene, which why hasn’t someone made a supercut of those? Where the hero makes a desperate call in a phone booth located rather curiously in the middle of a vast, empty parking lot, and is almost killed when a car smashes it to pieces. It happens in The Blues Brothers and…hm…well, certainly there are hundreds of other instances. Get on it, interwebsters.

So Novotny’s got his new dream research where he sends psychics into other people’s nightmares to see what’s what in their subconscious in order to help them overcome their fears, Blair is funding it in the secret hope of training psychic dream assassins to carry out his nefarious bidding, Alex is the nice guy who, though reluctant at first, likes helping the nice people, and Glatman is the troubled shithead happy to murder old ladies in their dreams to prove to Blair it can be done. Oh, and Jane? She’s the girl. She falls for Alex, but insists they keep their relationship on a professional level. Then, one night when she falls asleep working, Alex sneaks into her dream, and they have magical sex on a train. Yay! Dream rape! 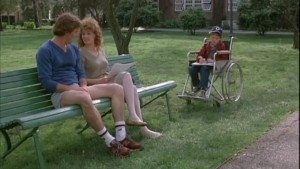 Dreamed himself into a wheelchair, this kid

Also on hand is George Wendt, playing a horror novelist who for no discernable reason knows all about Blair’s plans and is killed by Blair’s henchmen, one of whom is played by Chris Mulkey, whom we all love as ex-convict Hank Jennings from Twin Peaks. Do you think he and David Patrick Kelly (Jerry Horne in Twin Peaks) had a Dreamscape party on the Twin Peaks set? I bet they did.

The dreams in the movie are almost all boring, aside from two. The first is the kid’s nightmare. This kid is so beset by nightmares that he lives at the college campus science lab and is confined to a wheelchair. Yikes. Alex enters his dream and meets the Snakeman, who’s actually kind of terrifying despite being a guy in a snakesuit. He’s also stop-motion animated in part. It’s pretty lousy stop-motion, but I still enjoyed it. Alex helps the kid kill it, but I guess it freaks him out, because later he draws a picture of it that Glatman sees. 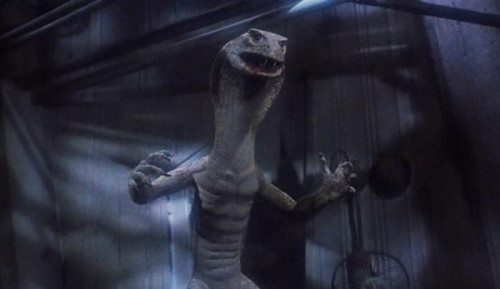 Which brings us to the second non-boring dream, the President’s dream at the end. Seems the Pres (beloved Green Acres star Eddie Albert) is having terrifying nightmares of nuclear annihilation and has decided to go to the peace talks in Geneva and propose total disarmament with the Rooskies. Blair is aghast. He fears such peacenik antics will doom the United States to destruction. What else to do but send an assassin into the Pres’s nightmare? 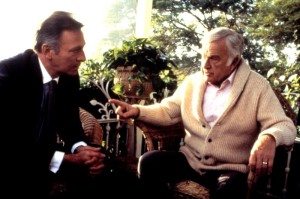 So. The dream of the Pres, which begins on a train rolling through a red-hot nuclear wasteland of D.C. Alex is there and so too Glatman. Glatman boasts that he knows kung-fu and has been learning how to control the dreams he invades and all of a sudden turns into the scary Snakeman! Fuck! Run! Alex and the Pres run around a bit, and it looks bad for our heroes, but finally Alex figures out how to do cool dream stuff, distracts Glatman with an image of Glatman’s murdered father, and the Pres kills him. This all takes a few minutes, tops, and is about as anti-climactic a climax you could imagine.

So who imagined it? Dreamscape was originally written by David Loughery, noted for writing, among others, Star Trek V: The Final Frontier. So there’s that. It was directed by Joseph Ruben, who’d previously directed ’76 high school comedy The Pom Pom Girls, and Gorp (’80), the Jewish Meatballs. I can’t say I noticed any particular directorial strengths watching Dreamscape. 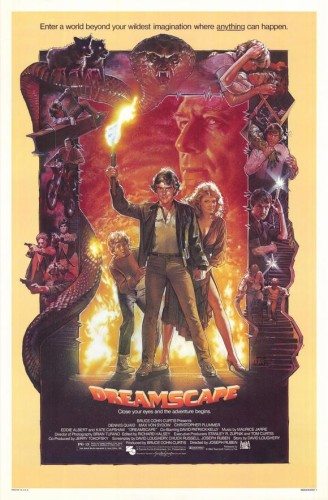 Definitely not trying to ride the fame of any other movie…

10 responses on “Dreamscape Is Really Rather Awful”