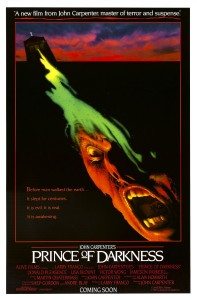 This image is scarier than anything in the movie

Among my most beloved movies of all time is The Thing. I watch it yearly. At least. I love it to its lonely, snowy death. Escape From New York and They Live aren’t quite up to the same level, but I don’t care. They’re awesome and I love them too. So it’s sad to realize that John Carpenter’s oeuvre is rife with terrible, terrible movies, movies so terrible that to pick one as the worst will inevitably invite argument.

I wanted to watch something horrific on halloween and Prince of Darkness (’87) popped up among options and I thought, hey, I haven’t watched this one since it came out, I wonder if it’s better than my teenage self remembers it?

Prince of Darkness is exactly as fun as whatever the opposite of fun is.

The whole gang, minus Scooby

I liked the view inside the spooky mirror, with wiggling fingers and grasping hands, and the final shot of what’s-her-face drifting away, lost forever. All of which amounts to about five total seconds of screen time. And which of course was about a million times more effective in Cocteau‘s 1950 Orphée.

The rest of the movie is one long, slow build to absofuckinglutely nothing at all. I can’t believe Carpenter wrote this thing himself (under a pseudonym). He fills the dialogue with a bunch of quantum physics notions which, to his credit, aren’t scientifically illiterate, but his attempt to link quantum theory to Satan is, well, I don’t know even know. It’s absent, is what it is. There’s physics talk, and there’s some swirly green goo turning people into zombies, and then at the end Satan’s mighty claw is briefly glimpsed coming out of the mirror and then, THANK YOU JESUS, the movie’s over. 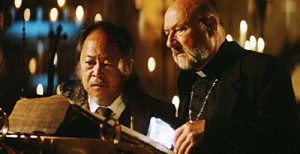 It’s nice to see Victor Wong getting some work, and Dennis Dun, also from Big Trouble In Little China, shows up, and isn’t bad, but my god, where did Carpenter dig up his other actors? And I mean that literally. Which cemetery? These people are corpses. I’ve seen two-by-fours give less wooden performances.

The opening sequence sets the tone, which let’s call suicidal. Intercut with credits we watch various characters wandering about doing nothing of any interest whatsoever while Carpenter and Alan Howarth’s music drones beneath them, for what must be ten minutes. It feels like forever. Anything but more shots of that guy’s fucking mustache!

My god this movie is boring. There’s nothing else to say about its story because there is no story. It’s just alleged science students acting like morons for two hours, until finally most of them are dead and they break a mirror. The end.

This is the worst kind of terrible movie. There’s not even any fun gore to be amused by. There’s just nothing. No characters, no drama, no story, no blood and guts, no scares, no big finish. I can’t believe I picked this over From Beyond, which I know is a good time. I dared to dream, and I lost.

If you need a movie not to watch next halloween, I can’t recommend Prince of Darkness highly enough. I could easily not watch this movie every day for the rest of my life. You are advised to do the same.