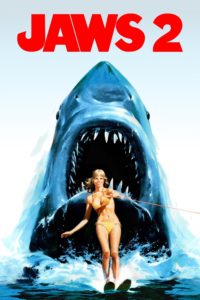 Jaws was a great movie. An all-time classic. We can agree on that, right? Supreme Being very rightly named it as Steven Spielberg’s best movie, placing it above such films as Raiders of the Lost Ark and Close Encounters of the Third Kind. And even 1941, which inexplicably didn’t make his list. (We’ve gotta talk, SB) Evil Genius listed Jaws as one of the films that made him a film junkie. So what I’m saying is, great minds think alike in deeming Jaws one of the best motion pictures ever made.

Jaws was kind of a big thing in 1975, frightening film-goers into avoiding oceans, lakes, ponds and probably their own bathtubs. It was hugely influential in not only the “man vs. nature” movie genre, inspiring Grizzly, Piranha, and even The Car, but it also began to shape what would eventually become the big summer blockbuster. Re-released in 1977 under a PG rating rather than the R it had earned two years earlier, the film was still a draw.

So, y’know, a sequel was just kinda inevitable.

Jaws 2 came out just when you thought it was safe to go back into the theaters. Or, as I like to call it, 1978. It was a hit, eventually bringing in over $100 million in the U.S. alone on an estimated $20 million budget. Not too shabby, but still a far cry from the first film’s mega-hit numbers. Still, it was enough to guarantee two more sequels over the next decade.

Sequels which I’m going to avoid talking about, because they go from awful to disastrous.

Jaws 2, however, is pretty worthwhile for a sequel. It lacks the suspense and brilliant cinematic deftness of young Spielberg, but it nevertheless stands up as a pretty good summer movie. Directed by Jeannot Szwarc, a prolific television director who ventured into the movie biz for a few years, Jaws 2 starts off as a fairly direct imitation of the original before veering off and becoming one of filmdom’s first slasher flicks — beating Halloween to the big screen by five months.

That’s right. I said it. Jaws 2 was imperiling teens before Michael Myers had even found his William Shatner mask, let alone donned it and began slashing his way to movie fame.

These guys really should have just stuck to their weekly game of Dungeons & Dragons.

The movie starts with a tip of the hat to the first film, as a pair of divers find Quint’s ship and proceed to take a few underwater photos before a great white shark comes along and ruins their fun.

Eh, they were tourists. They knew the risks when they came to Amity.

From there more shark-related shenanigans occur. A water-skier meets her toothy demise and then the shark attacks the boat that was pulling her. In a moment of bad decision-making that is either horrifying or hilarious, the driver tries to hit the shark with a gas can but spills it on herself instead. Then she takes a shot at it with a flare gun and… I think you can guess the rest.

Later, an orca is found on the beach, carved up worse than Asia following World War II. Chief Brody (Roy Scheider, back for more) suspects foul play of the sharkian kind but — as in the last movie — no one believes him. With Matt Hooper away at sea and Quint dead, Brody has to go this one alone.

Again, quite a bit of this is reminiscent of Jaws. But along the way we’ve also been introduced to some of the teens in town. Mike, Brody’s oldest son; Tina the beauty queen; Andy, the best friend; and the rest.

They hang out together. They go boating together. And eventually they are menaced by a great white shark together. You know: typical high school stuff.

Deciding to snag some beer and sail to the lighthouse, the kids draw the attention of the shark. The shark attacks Tina’s boat first, as it has hung back from the others so she and her boyfriend can get some alone time in. The boyfriend bites it (like I wasn’t going to go there) and Tina gets left alone as the creature moves on toward the other boats.

In a slasher film — even a fishy one — sex equals death. Tina’s boyfriend should have known better.

Once the shark catches up, serious mayhem ensues. There’s capsizing and collisions and all sorts of boat-related havoc. The kids get pushed out into the current, taking them toward the open ocean, with the shark in deadly pursuit. Will Chief Brody show up in time and save Amity’s teens, or will they end up riding the waves in bite-size pieces?

It’s this third act of Jaws 2 that gives the movie an identity separate from Jaws. In the original, Brody, Quint and Hooper set out to hunt the shark. Granted, the predator/prey dynamic gets turned on its head, but the three men are still capable shark hunters.

Not so the kids. Terrorized, attacked, they react in fear and desperation. They cobble their boats together. One girl screams (a lot), another prays. They are out of their depth (sorry) and do their best to remain alive. Some make it, some don’t. Jaws 2 doesn’t follow the same tropes as the movies that followed Halloween in having one final girl be the sole survivor. But even if the body count is relatively light compared to future slashers, you can see the genesis of the genre here.

Jaws 2 works as a nifty (if PG rated) slasher flick. There are a bunch of teen-agers who want to get away from their parents and drink and fool around. They end up in a remote place (here, the ocean rather than a remote cabin) menaced by a seemingly unstoppable monster (a shark rather than a masked maniac). There’s not much gore, but honestly the first Jaws film was light on the blood & guts as well.

And so was Halloween, if you recall. We were so innocent then.

And then the lawyers showed up!

Inadvertently or not, Jaws 2 contains enough of the elements of the slasher films that followed to be considered the first. You can see the germ of the ideas here as what was the monster movie became something else, something more intimate and razor sharp.

Within a few years slashers would be dominating theaters, endangering movie teens and making the violence of Jaws and Jaws 2 seem quaint by comparison.

Jaws 2 is not the gripping film that Jaws is. It doesn’t have the same sense of dread, nor Spielberg’s deft touch — Spielberg imbued Amity with an authenticity that Szwarc never comes close to matching. But Szwarc is solid as a director. He’s fortunate in inheriting the returning Scheider, as well as Lorraine Gary and Murray Hamilton. He also gets to work with some talented young actors including Keith Gordon, who later starred in John Carpenter’s Christine and Back To School with Rodney Dangerfield and Robert Downey, Jr. before becoming a director himself.

While Jaws 2 isn’t a classic it will keep you entertained for for a couple of hours. Especially if you like sharks, sharks eating teen-agers, helicopters, and sharks attacking helicopters.

6 responses on “Jaws 2 vs. Michael Myers vs. Jason vs. a Helicopter”