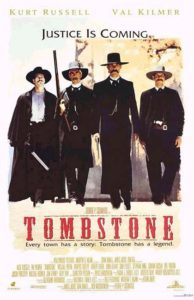 On October 26th, 1881, there was a bit of a scuffle. You might have heard of it. It took place in Tombstone, Arizona, and decades later it inspired a host of movies, including My Darling Clementine, Hour of the Gun, and Gunfight at the O.K. Corral amongst others.

In 1993 another adaptation of this famous story hit the big screen. Directed by George Cosmatos and starring Kurt Russell, Val Kilmer, Michael Biehn and Powers Boothe, Tombstone rehashed the famous gunfight one more time for a modern audience.

Tombstone establishes the good guys and the bad guys right off. The Cowboys, a gang of rustlers and gunmen led by Curly Bill Broscius (Powers Boothe) interrupt a Mexican wedding reception by killing the groom and his groomsmen and then settle in to gorge themselves on the wedding feast. When a priest starts in on them for their evil ways, Johnny Ringo (Michael Biehn) casually kills him.

So, yes, if I wasn’t clear, these are the bad guys.

From there we get quickly introduced to Wyatt Earp (Kurt Russell) and his brothers Morgan (Bill Paxton) and Virgil (Sam Elliott). The Earps are heading to Tombstone, a silver-mining boomtown, looking to make some money. Wyatt has no interest in being a lawman though — a fact he makes clear several times throughout the early portion of the film. He’s just a man looking for a new life.

John “Doc” Holliday (Val Kilmer) joins his friend Wyatt in Tombstone after getting into a scuffle over a less-than-friendly game of poker, stabbing one man, and then taking all of the cash and fleeing with his sometimes-ladyfriend Big Nose Kate (Joanna Pacula).

When the Tombstone town marshal gets shot and killed Virgil takes up the mantle of lawman. He promotes very orderly regulations in Tombstone (such as no carrying of firearms within the town, an idea that still brings heated debate over 130 years later). This gets him on the bad side of the Cowboys and it’s not long before debates become disagreements, and disagreements become shoot-outs.

And then the O.K. Corral becomes a tourist attraction.

Tombstone deals with this historically resonant shootout, plus some of the famous gunfight’s considerable aftershocks. To wit: the deaths of several of the Cowboys galvanizes their hatred of the Earps. More violence ensues. Guns blaze and lead flies. Bodies hit the floor. And the dirt. And the water.

Tombstone is a solid, colorful retelling of this familiar tale. It gives the real-life characters heft and dimension. It also corrals in some of Tombstone’s lesser-known personalities, such as Billy Breckinridge, “Texas Jack” Vermillion, and Sherman McMaster.

Not that you’d confuse it for a documentary, but it’s a step closer than the Hollywood norm.

Since the film’s release twenty-plus years ago it has been Val Kilmer that’s garnered the lion’s share of the film’s critical and viewer praise. He does a great job as Doc Holliday, no doubt about it. He plays Holiday as a man with an incurable disease looking to go out in a blaze of glory.

Kilmer plays the role for all he’s worth and his portrayal of Holliday has yet to be outdone.

But Kilmer’s not alone in giving an impressive performance. Michael Biehn is outstanding as Johnny Ringo, effectively playing Doc’s döppelganger. Ringo is dark and moody — a man who has done and seen terrible things — but also one with friends as important to him as Wyatt is to Doc.

Equally good are Kurt Russell and Powers Boothe. Boothe plays Curly Bill Broscius as an outwardly genial sort, with a big smile and a hearty laugh. But there’s a mean glint in his eye and an edge to his laugh. Broscius may be an amiable killer, especially in contrast to Ringo’s somber presence, but he’s still a killer.

Kurt Russell in many ways has the most difficult part, and not just because he’s the film’s lead. He portrays Wyatt Earp as the strong center of his family, and the one that outsiders turn to when they’re looking for a lawman to bring order to the town. Doc refers to him as “an oak.” His brother Morgan often says “You’re the one, Wyatt.”

Wyatt’s a reluctant hero, though. He tries to avoid getting involved in the growing conflict until his duty to his family leaves him no other choice. And then he goes full Hollywood, wreaking vengeance on those who crossed him. Yet even as a deadly avenger, Russell’s Wyatt is reflective, sometimes apprehensive, and regretful. It’s a strong performance for Russell, faithful to the legend of Wyatt Earp if not the reality.

A planet where Earps evolved from men?

The real Wyatt Earp was many things, but above all he was a man who knew how to make money. He had done very well as a gambler and a lawman in Dodge City, and intended to continue that tradition in Tombstone. There was no reluctance on his part in carrying a badge. In fact, one of the problems Wyatt had with Sheriff Behan was that Wyatt wanted to break Tombstone off as part of a new county, and planned on running for sheriff of the new area himself. This would have severely impacted Behan’s income — part of his job was tax collection, from which he took a cut.

There were other issues as well. The Earps, like many of the local mine owners, were Northerners and Republicans. The Cowboys for the most part were either Southerners or Confederate sympathizers, and Democrats. Ayup, politics reared its ugly head even in the Wild West.

Some arguments just can’t be settled over a game of cards.

There is also the matter of what is generally referred to as the “Earp Vendetta Ride.” After his brothers were shot by Cowboys, Wyatt and Doc gathered up a small posse and went after the Cowboys. They killed four of them, including Curly Bill Broscius. In possibly the weakest segment of Tombstone, the posse goes on a cinematic rampage and, in a montage of slaughter, kills more men than smallpox. Wyatt even shoots a man, with a pistol, while hanging off the side of his horse.

It’s kind of painful to watch.

For most of the film, Wyatt Earp has avoided violence. He tells his brother Morgan the story of killing a single man in Dodge City, and how that death stayed with him. He tries to talk Virgil out of confronting the Cowboys. Then, in the third act, he guns down his enemies with abandon.

In a film I enjoy, and for one that admirably attempts to capture the spirit of the events surrounding the gunfight at the O.K. Corral, this montage of murder is unfortunate. The filmmakers had stuck fairly close to actual events, and then, finding the events of the actual ‘vendetta ride’ too boring, bludgeoned their film’s climax to death with the Hollywood stick.

There’s more, of course. The town of Tombstone was nothing if not a hive of activity, visited and inhabited by more than a few names that are now famous, or infamous, in Western folklore. These people all had stories, even if many of them never ended in a dramatic gunfight.

Although, granted, more than a few of them did.

Tombstone is, first and foremost, a movie. But while it may enhance certain events and overlook others, it nevertheless captures the overall feel of a bustling boomtown and the men and women who inhabit it. It was an exciting time, and not just because a gunfight could break out over any old game of poker. Eddie Foy, portrayed years later by Bob Hope in The Seven Little Foys, performed at Tombstone’s Birdcage Theater early in his career. John Behan went from his profitable sheriff’s office (allegedly making thousands per month at a time when a glass of beer cost a nickel) to working as a turnkey at Yuma prison. Men and women flocked to Tombstone because there were jobs to be had, money to be made, and fortunes to be won and lost.

Tombstone was a boomtown that swelled in population as rapidly as it dried up, sending most of the inhabitants off in search of new opportunities. Tombstone the legend is the tale of the law coming to tame the Wild West. Tombstone the movie is a vivid recreation of the events surrounding the most famous gunfight in history. There are battles aplenty, the good guys are (mostly) good and the bad guys are irredeemably bad.

Come for the gunfight, stay for the performances, and immerse yourself for two hours in the legend.

You’re a daisy if you do.

2 responses on “Tombstone Wants to Be Your Huckleberry”