And now, a brief journey into the world of recently watched movies I don’t have as much to say about as I usually have to say about movies. Which I imagine we’re all at least a little thankful for. Onward!

A sort-of-but-not-really remake of King Kong, in which the whole ape-climbs-large-New-York-building and dies is removed, and we’re left on Kong’s island to watch him fight monsters and Vietnam-era helicopters. Thankfully this isn’t anywhere near as dull and grim as the recent Godzilla remake, but for my taste it still isn’t goofy enough. Its stupidity too often feels lazy instead of fun. Of course the humans are going to be stupid—its what humans excel at—but in here their motivations are guided by cliché and screenwriter convenience rather than character or even the vaguest approximation of logic or recognizable human emotion.

Meanwhile, for a movie about monsters, where are the monsters? The baddie at the end is just another character-less lizard-thing for Kong to swat. Skull Island gets halfway to monster-movie bliss, but never makes it all the way. (The Evil Genius had more fun with it than I did; your mileage may vary.)

Producer Dino De Laurentiis wanted Roman Polanski to direct his update of King Kong, but for some reason he declined. Even young Spielberg had better things to do than film a man in an ape suit. But what about John Guillerman, hot off The Towering Inferno? Bingo.

Dino wanted a fun, comic Kong, so that’s what he got. On the whole, it’s an absurd failure of a movie. Thanks to work by Rick Baker and Carlo Rimbaldi, Kong’s face works well enough. He’s got a lot of expressions. But the rest of the time? He’s a man in an ape suit wandering around miniatures. The stop-motion of ’33 looks a lot better. For example, when Kong fights a dinosaur in what is the greatest stop-motion monster battle of all time. In the remake, ape-suit-man wrestles a rubber snake. Not an improvement.

Jeff Bridges is the best thing in it. He gives it his all. Charles Grodin is, as always, a pleasure, and new-comer Jessica Lange as “the girl” does well enough with what she’s given. Which includes such memorable scenes as Kong pulling down her dress to get a look at her boobs. Way to keep it classy, Dino!

A noir western directed by noir master Anthony Mann and shot by noir master John Alton. It looks fantastic. All shadows in the foreground and light in the back, deep focus, and a lead character who from the first frame you know isn’t making it out of this picture alive.

Indian Lance Poole (played plausibly enough by white man Robert Taylor) comes home from fighting the Civil War a highly decorated soldier. All he wants is to settle down on his massive tract of land and raise cattle. But the townsfolk ain’t so keen on an Injun owning land. Neither is the government, what with its racist homesteading act. Poole refuses to compromise. Someone’s going to die.

Impressive in that the movie takes the Indians’ side without any compromise. The white men are evil in Devil’s Doorway, none more so than the white man’s government itself.

Praised to the skies as a throwback to John Hughes movies of the ‘80s, I figured on some indie-movie laughs from this one. I got maybe three. There’s little else to enjoy in this unoriginal dud. Weighted down by tonal confusion, the movie lurches from one cliché to the next without ever granting humanity to its characters. What we get are actors acting. The talented Hailee Steinfeld (of the Coens’ True Grit) plays the unpopular angry girl, Nadine, in just the way we expect. What’s strange is how she’s presented. The movie wants us to see her as unreasonably angry at the world, but then also, ultimately, to feel her pain and not hate her.

Problem is, this is a movie. And she’s the weird, wacky, unpopular girl. Which means we’re on her side from the get-go. This is how movies work. So the movie gives us this sympathetic underdog character, then tells us we’re supposed to be appalled by her behavior, and then explains that in fact we should feel sympathy for her.

It’s like if the most popular girl at high school grew up and made a movie trying to convince the other popular kids that the irritating nerd girl everyone hated and made fun of had some geniune issues, a cool sense of humor, and maybe wasn’t so terrible after all.

Mrs. Supreme Being was so annoyed she didn’t watch the last half hour. Lucky for her.

As Altmanesque a movie as ever there was, starring Elliot Gould and George Segal as a couple of small-time gamblers who become friends and just generally mess around the way people do in Robert Altman movies. It’s great. Elliot Gould gives what may be his most inspired performance. He’s on fire from scene one. He’s even better than he was in M*A*S*H, if you can believe that.

The story? There is no story. It’s two guys gambling and losing money and almost but not quite making some girls and finally going to Reno for one last whoop-de-do. Will they win? Will they lose? Does it matter?

Altman pioneered the use of an eight-track recording system in California Split to better capture the overlapping dailogue he’s so fond of. A lovely cacaphony is the result. Converstions on top of conversations. Where to focus one’s attention? Anywhere you want.

A documentary on the famed makers of what was then (and probably now) known as the finest LSD of all time. Orange Sunshine it was called, made by a bunch of Long Beach surfers dubbed the Brotherhood of Eternal Love. Those still alive are interviewed, and theirs is a fascinating story. As seen throughout human history, they who take hallucinogenic plants or their extracts have profound spiritual experiences. And like so many religious converts before them, these surfers wanted to spread the word.

Their word was in the form of cheap—if not free—and very pure LSD. To fund this massive, years-long giveaway, they imported hash from Afghanistan, sold it, and spent the profits on improving their LSD lab and its output, meanwhile setting up a groovy commune in the hills.

Well, as you can imagine, things went as they all went in the ‘60s: It was beautiful for awhile, and then the cops came. Can’t have all these youngsters tripping on acid; none of them want to go to Vietnam and fight!

An interesting story marred only by recreations of the narrators when they were young, in footage digitally “aged” to suggest you’re watching actual film from the era. I found this incredibly distracting. There’s way too much of it.

Roger Corman directed this indictment of southern racists starring William Shatner in a pre-Star Trek role, and does a damn fine job of it. It’s low budget black and white, but Corman knows how to shoot to make the most of what he’s got. Shatner, not yet the insane actor we would all come to know and love, is Adam Cramer, a shit-stirrer come to a little town to stir up some racist shit. The high school has just been integrated, and doesn’t that make y’all mad as hell? While riling up a mob, Cramer takes time to seduce a high school girl and make it with another man’s wife. He’s a real swell fella.

Charles Beaumont wrote it. He’s best known for slightly sci-fi/horror/ghostly short stories and for many a memorable Twilight Zone episode. It’s a surprisingly solid little movie, and unusual for its time in taking on racism as head-on as it does. It had trouble finding distribution, and was for ages the lone unprofitable Corman movie. 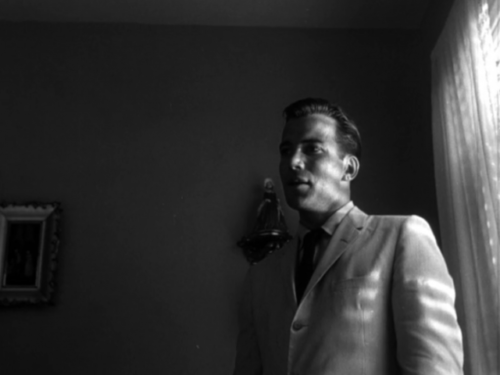