It’s a slow, hot summer, movie-wise. Packed, as usual, with bloated sequels of sequels, remakes of reboots, and much else I’ve barely noticed. At least a few weird ones have crept in around the edges, like Sorry to Bother You and, oh, probably some other somethings.

Which is why this particular summer movie round-up is in no way concerned with movies that have actually opened this summer—I would never bore you with such obviousness! No, instead I offer thoughts various and sundry on whatever the hell I’ve happened to lay my eyes upon these last few weeks.

We begin with a movie you never knew you’d forgotten—

Written by John Sayles, produced by Roger Corman, with special effects by James Cameron, a blatant Corman rip-off of Star Wars—how could it be bad? Impossible!

Indeed, Battle Beyond the Stars is some kind of mad genius, far more compelling than it has any right to be, and not because it’s what generally passes for “good,” but because it’s bad in all the best ways. I’m not going to sit here and pretend I can actually remember anything that happens in it, but I will swear on a stack of bibles that I enjoyed every minute.

Need more convincing? George Peppard plays a space cowboy. And I mean that literally. He’s a spaceship pilot who dresses like a cowboy. Your dreams have indeed come true. 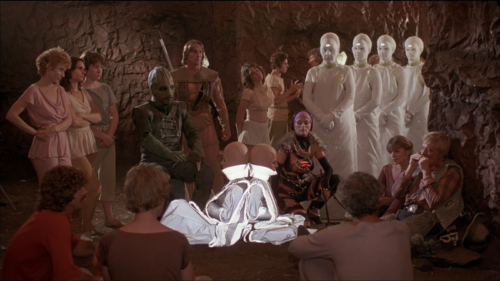 That’s Peppard blowing on his harmonica.

Sayles’s script is just knowing enough to elevate matters beyond the trashy, and Cameron’s effects aren’t bad at all. Why he gave a spaceship a giant pair of breasts we may never know, but is that really the sort of question one should ask of this movie? That there’s a spaceship with a pair of giant breasts is enough. 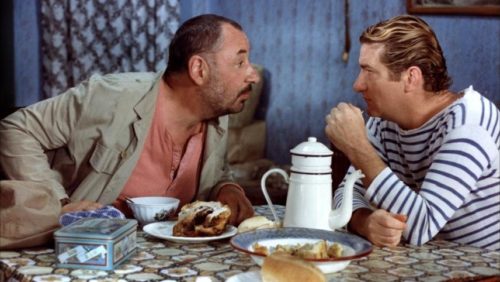 The book is arguably Thompson’s masterpiece. An absurd first-person tale of a lazy, amoral sheriff everyone thinks is too stupid to breathe who just up and starts killing people. It’s hard to describe why it’s as funny as it is, but I’m telling you, it’s hilarious. The narrator is, as they say, unreliable. He’s insane, basically, but in a very focused manner. The only flaw of the book is the ending, of which there is none.

The problem with the movie is that it’s hard to make a murderous sheriff’s activities funny when you’re just watching them happen. When that insane murderer is narrating, as in the book, the joke is his take on events. This is not easily translated to film, and Tavernier doesn’t really try. His policeman is a strange guy, but not a funny guy. The movie ends up as something of an existential meditation on violence. But then I already told you it was French. 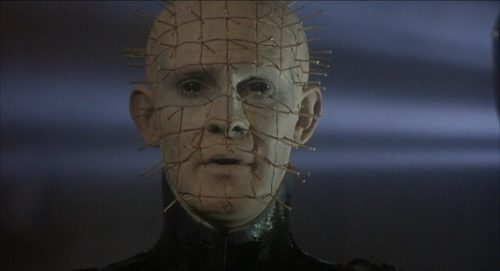 I hadn’t seen it since the ‘80s. It’s been sequelized about nine times. Surely the original was better than I remembered?

Ehh. Not really. Hellraiser is, in many ways large and small, not at all a good movie. What works is the the creature designs, the Cenobites. Those guys are weird as fuck, and it’s no wonder folks wanted to see more of their evil deeds.

As far as this first movie goes, it’s badly structured, makes zero emotional sense, the acting is just this side of plywood, and Clive Barker, whatever his talents as a novelist, is not a film director.

That little box is cool, though.

The Sailor Who Fell from Grace with the Sea (1976)

A strange and wonderful and very dark surprise of a movie. It’s been on my to-watch list for at least five years. I thought it was going to be a character-driven ‘70s romance about a widow and a sailor. Which it is. And is not.

It’s more like, say, The Wicker Man. In a sense. It’s based on a novel by Japanese master Yukio Mishima, and though the story has been relocated to the English coast, it’s Mishima through and through. I haven’t read this novel, but having read a number of his others, this movie felt very, very familiar. So much so that I knew how it would end halfway through. I couldn’t believe it really would end that way, but I know Mishima.

Mishima has a thing about driven, fanatical young boys, and such is the friend of the son of the widow. This fanatic talks a lot of pseudo-erudite talk to his group of acolytes, but again, if you know Mishima, you know his fanatics never stop at talk. They act, to the regret of all around them.

It’s written and directed by Lewis John Carlino, who wrote a favorite of mine, the evil little masterpiece Seconds. Carlino isn’t expansive. There is nothing wasted in this movie. He tells his story and nothing more. And his story is quietly devastating.

I know. We, as in everyone on Earth, are done with Woody Allen. He hasn’t made a great movie in many years, and, yes, whatever one is to make of the many bizarre and conflicting stories out of his past, the man is undeniably creepy.

But. He’s also a genius filmmaker, with more masterpieces under his belt than damn near anyone. So I keep watching what he churns out, just to see.

Wonder Wheel is another of his recent movies in which, wisely, Allen himself does not appear. It was mostly trashed upon its release, but I’ll be honest—I kind of liked it. At least compared to his last few. He wrote it less as a movie and more as a Tennessee Williams homage, which could reasonably annoy you. It’s very theatrical. Then again, it’s shot by Vittorio Storaro in outrageous, vivid colors the likes of which I’ve rarely seen.

You shouldn’t oughtta introduce those two…

Kate Winslet gives an intense and beautiful performance as a depressed waitress working in a ‘50s Coney Island diner who starts up an affair with a lifeguard. Everyone else is reasonably credible in their parts (though I liked Jim Belushi much more in Twin Peaks last year), and is it great? It is far from great. But it’s kind of strange. And by writing like Williams, Allen avoids his typical jokiness and gets at something a little deeper.

I don’t know. Maybe I was just in the right mood. But there’s something to this movie. Maybe not enough. But something.

One response on “Summer 2018 Movie Round-Up”