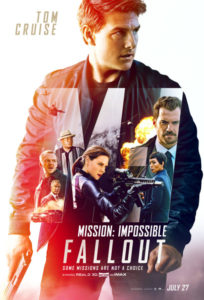 Long, long ago, in those heady days of 2015, back when we were still buzzing from the joy of George Miller’s return to the wastelands, Christopher McQuarrie came along and wrote/directed the surprisingly enjoyable Mission: Impossible – Rogue Nation. Surprising because I’d found every previous entry in the series, in an opinion not, perhaps, shared by the masses, to be, each in their own way, lousy. Rogue Nation, to its credit, was absurd in just the right way. It was fun, it didn’t take itself at all seriously, and the action sequences were well shot.

Or so re-reading my piece on Rogue Nation reminds me. I don’t actually recall a thing about it. Nor was I supposed to! The Mission: Impossible series is to great movies like ice cream cones are to great meals. Nobody ever said, “Wow, I was just remembering that amazing scoop of ice cream I ate three years ago. So good!”

To be fair, a faint glimmer of sense-memory must have lingered in the depths of my brain, because, for no logical reason I could have named, I found myself thinking it would be a good idea to see Mission: Impossible – Fallout, also written/directed by McQuarrie (the first time a director has returned in the history of the series).

It was not a good idea to see Mission: Impossible – Fallout. I’m at something of a loss to explain the love this movie is generating. Compared to the ice cream cone that was Rogue Nation, Fallout is a peanut. An unsalted peanut. Not only can’t I recall anything about the movie three days after seeing it, I couldn’t recall what had happened from one scene to the next. Just like eating peanuts and how no one ever said, “Wow, you remember that one peanut I ate six peanuts ago? That one was amazing! Let’s see how number seven tastes…” 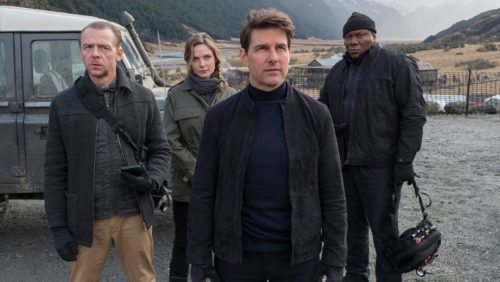 Getting the gang back together

The line separating so-absurd-it’s-fun and so-absurd-it’s-terrible is, it turns out, awfully fine. McQuarrie walked it just right his last time out, but with Fallout he’s created a simplistic movie too complicated to follow or care about.

The structure is all too familiar in this world of Avengerses and Star Warses. Endless action sequences and repetitive, confused scenes of exposition are alternated with little concern for the overall dramatic arc. It’s just one thing after another. A couple of the action sequences work. The fight in the bathroom and the motorcyle chase come to mind. The rest feel rote, with the final helicopter chase showing with stark clarity how one may cross the line from absurd fun to absurd stupid. When your plan to catch someone fleeing in a ‘copter is to fly your ‘copter into theirs, bringing both of you down over a precipitous mountain peak, you are the definition of someone without a plan.

The expository scenes following each chase are baffling. Squinting, one can make out the story. It’s not complicated. Yet somehow it never makes sense. McQuarrie obviously recognizes this, given the time he has his characters spend explaining matters to each other. Who’s that lady? Why’s she want that guy dead? Who thinks who is what now? 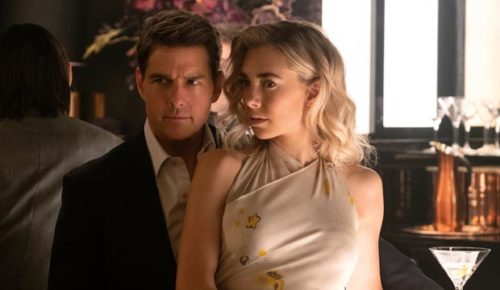 It all has something to do with nuclear bombs, the defusing of which takes the cutting-the-wires cliché into territory no movie should have explored. Granted, there’s still room to grow here. How soon before one of these ticking time bomb scenes counts down in tenths of a second? And the hero cuts the wire not with one second left, but with one tenth of a second? One hundredth? Come on, Cruise, up your game here already!

Everything feels tired in Fallout. Everyone looks their age. For all the running and chasing, the movie feels stationary. Even the reliably entertaining Simon Pegg is given almost nothing to do.

And then there’s Henry Cavill. Where did this man come from? Who decided to put him in movies? If there’s one bright spot to be found in Fallout, it’s how hard I laughed at every one of his line readings. I don’t mean to be rude, but he’s not really an actor. Is he? Or was it just that he was upstaged by his mustache? A fabled mustache, the one he wears in Fallout. Not allowed to shave it for contractual reasons, he kept it on during reshoots of Justice League, forcing the studio to have it digitally removed in all of his scenes, to what I hear is rather hilarious effect (I am a fool, but not so big a fool as to have seen Justice League). The mustache ably out-acts the man wearing it. 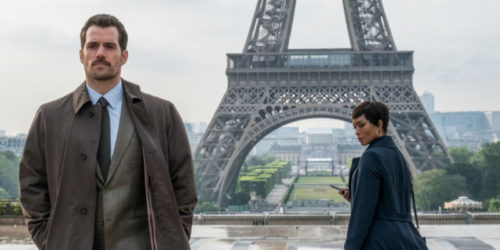 The mustache takes his man out sightseeing

Then there’s Cruise, angling ever-harder, one supposes, for Scientology saint-hood. Would the Church of Scientology, given its hugely troubled and disturbing history, even exist now if not for Cruise? It’s worth wondering. Despite his famous tirelessness, Cruise is beginning to look overworked. He insists on doing his own stunts—for what? For the movie? The movie would be no worse for using stuntmen. Maybe he believes he is Ethan Hunt, that he has to do these stunts to elevate the mere making of a movie into something real and physical, to give himself a larger sense of worth and accomplishment. He seems ever more manic in this regard.

Others have noted the metaphorical possibilities here. That the ever-increasing demands on Hunt the character mirror the audience’s ever-increasing demands on Cruise the actor. But that doesn’t really track. Audiences might well demand more action, bigger set-pieces, etc. in their CGI summer blow-em-ups, but no one’s demanding Cruise do it all himself. No one but Cruise. I don’t know. Maybe it’s time he made a nice comedy. A sequel to Risky Business? I’m a fool; I’ll buy a ticket. 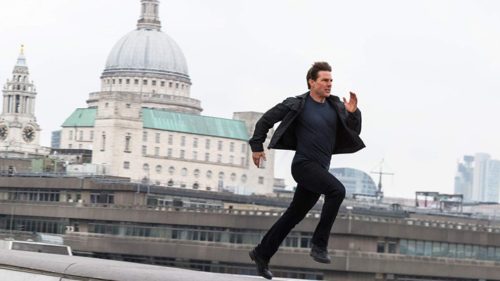 2 responses on “Mission: Impossible – Fallout Is A Bunch of Malarkey”