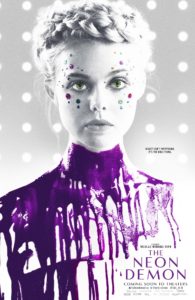 Nicolas Winding Refn‘s Neon Demon is one part Suspiria, one part Under the Skin, and one part high-gloss fashion magazine soaked in methylated spirits. It features cannibalism, necrophilia, pedophilia, bondage, miscellaneous erotica, flowing wounds, and a wild bobcat in your boudoir. It also — after its color-saturated, hypnotically blurred, and monstrously scored first act — gets numbingly dull.

Perhaps you’ve seen Winding Refn’s other films? If so, you can likely understand how this audio / visual overload can slip you slowly to sleep. Winding Refn’s films (Valhalla Rising, Drive, Only God Forgives) start like the climax of a Flaming Lips concert and then, like those concerts, soon leave you alone in an empty hall full of fluid-soaked confetti, wondering where your left contact lens ended up. 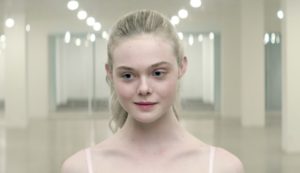 Then, in the parking lot, you get mugged by a candy raver who licks your neck as she liberates your possessions.

Is that what Nicolas Winding Refn films are like? Well, maybe not. But there’s something brain melting about them, which makes them insane and captivating until they just plain aren’t. 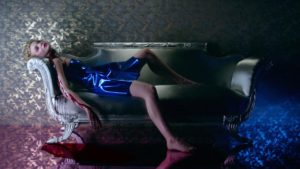 In Neon Demon, Elle Fanning plays 16-year old Jesse, an aspiring model who arrives in Los Angeles unchaperoned. The film starts with her dressed in a blue synthetic number, bleeding out from the neck, on a divan, as a photographer captures her. Jesse is naturally beautiful in a way that variously enraptures and enrages those around her. Her blood is fake but the sinew between beauty and violence isn’t. 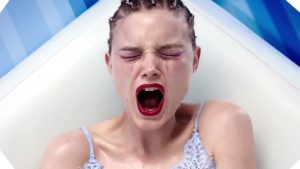 As in many Winding Refn films, what happens next doesn’t sound like much when it’s explained, so let’s not stress over it. In brief, Jena Malone‘s make-up artist, Ruby, takes Jesse under her wing and — with unclear intent — rasps her against the brittle models that now make up her world (Abby Lee and Bella Heathcote). Jesse shoots to fame in aptly accurate LA fashion — meaning she never seems to benefit from success in the slightest. Keanu Reeves bumbles through a few scenes as an unpalatable hotel manager and Christina Hendricks slays in her one appearance as a modelling talent agent. 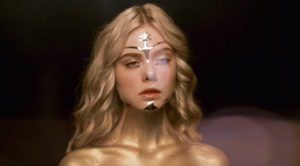 Neon Demon buries you in beauty. For its first act, it does so menacingly and disorientingly. Fanning works well as the naif quickly corrupted while her cold, cruel foils stink of lovely death. Layers of physical subterfuge coat everything, particularly that which might have otherwise glowed like natural skin. It’s make-up over plastic surgery on top of fake smiles and underneath it all: the screaming void. There is no thought, no talent, no purpose but beauty. Death is here, and more than suggestively. Cliff Martinez‘s excellent soundtrack of sparse electronic pulses feeds this mood.

Like Chevalier — which reduced masculinity to a comic competition for supremacy — Neon Demon strains femininity down to a horrific struggle to seduce. Neither film (nor either writer / director) believes either gender can be so distilled, but each film, in its own way, uses the simplification to good effect. It’s impossible to watch Neon Demon and not consider what beauty is and what one’s own culpability is in demanding it from young ladies, regardless of the harm. 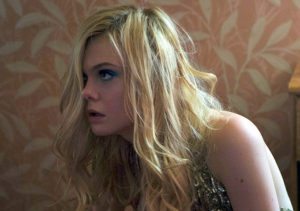 Don’t think we missed the nod to Repulsion, because we didn’t.

As the film continues, this theme devours the story. Neon Demon becomes unfocused, and not just in Natasha Braier’s admittedly intense and intentionally streaked cinematography. Characters grow increasingly hard to care about. Situations that threatened earlier fail to come calling. The horror promised holds back for too long. Unreleased, the tension turns wan. Symbolism has to suffice, with triangles, corpses, gold, predatory cats, and the eye of the beholder — and the beholden — shifting in and out of too stylish tableaux.

Then, in the end, Winding Refn finally lets his picture become the slasher film it threatened to be. And, sure, it’s beautiful.

That is, if something manufactured can truly be considered beautiful.