Jesse, who, back in season 4, talked in his therapy group about Gale as a “problem dog,” one he put down for no good reason, has himself become the problem dog in this episode, a rabid one, according to the title, and according to one of Saul’s ever apropos metaphors, in which Jesse is Old Yeller, suffering from rabies, and Walt is Timmy. Walt doesn’t care for the suggestion. He begins the episode telling Saul never again to bring up killing Jesse, then ends it making a call to Todd to request just that. Jesse’s got to be put down.

And he does, too, at least from Walt’s perspective. Walt, who doesn’t know the half of it, who thinks only that Jesse has gone mad with anger, who has no idea Jesse is staying at Hank’s house and spilling everything he knows.

The episode starts with a tiny jump head in time. Walt drives to his house, sees Saul’s car in the driveway, goes inside to find the place doused in gas, but no Jesse. What happened? Walt tries to get the place cleaned up, but it’s gasoline, it’s soaked through the carpets. Tells Skyler and Junior a bullshit story about a gas station pump malfunction which even Junior sees through as bullshit. Of course Junior thinks Walt is covering for his cancer, when in fact Walt is a psychotic madman. He takes the family to a fancy hotel. 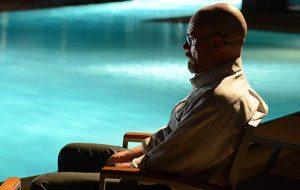 Walt finds a swimming pool to sit beside

Skyler wants the truth. Walt gives her a part of it, anyway, the part about Jesse having dumped the gas but, apparently, having changed his mind. Is he a danger, asks Skyler? No. Has he ever hurt anybody? Walt hesitates before saying no to that one. Can he even admit it to himself? Even if he can, he can’t say it out loud, not to Skyler. Walt says he just needs to talk to Jesse. Talk as in talk, or talk as in “talk”? Skyler makes it clear that talking to Jesse isn’t going to cut it. They need to get rid of him. After all, she adds, “What’s one more?”

Skyler’s journey has been a long one. Most people who fall within Walt’s orbit become corrupted or wind up dead quick as can be, but with Skyler it’s taken real time and effort to bring her to this point, where she suggests taking out Jesse to save her and Walt. Her soul has become as black and charred as Walt’s. He’s dragged her down to his level, and he won’t even admit it! He’s aghast at the notion of killing Jesse, or so he pretends. I don’t think Walt is aghast at anything. Regardless of his long-standing concern for Jesse, this episode charts Walt’s course from not so much as considering taking Jesse out, to calling in the hit. 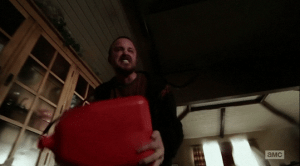 Jesse shows Walt how much he loves him

Midway through the episode we flash back to Jesse and the gasoline. What made him stop? He douses the place, pulls out his lighter, and Hank shows up, gun drawn. Jesse cries out, “He can’t get away with it!” over and over again, but Hank convinces him that together they can ensure Walt is caught. But Hank realizes he can’t take Jesse in to the DEA just yet. They still have no evidence. So he takes Jesse home. He tries to get Marie to leave the house, but once she hears that having Jesse around is bad for Walt, she’s making the kid coffee.

Marie gets her own little scene with her therapist where she talks of looking up poisons online. She has no plans to actually poison Walt, she says, but it’s sure nice imaginging it.

Hank sets up a camera in his living room and Jesse tells his story. Gomez is there too, and afterwards tells Hank he believes the kid. But still, no evidence.

Hank’s got a plan. Walt’s been calling, wants to meet with Jesse in an outdoor mall and explain himself. Hank wants to wire Jesse, assuming Walt will admit to something on tape. Jesse’s afraid Walt is leading him to his death. “Mr. White—he’s the devil!” Jesse is rightfully freaked out, saying that however they think it’s going to go down, it’ll go down in some opposite way. Mr. White, he explains, is “lucky.” Hank says that according to everything Jesse’s told them, it sounds like Walt’s been going to great lengths to keep Jesse alive. He actually cares for Jesse. Which is true, as far as it goes. Walt has indeed done much to keep Jesse alive over the course of the show, but has he ever really done it for Jesse? Or was everything he ever did self-motivated? Well, it’s some of both, isn’t it? Yes, Walt cares about Jesse. And yes, every life-saving move Walt’s made on Jesse’s behalf has helped Walt. Walt’s not exactly an altruist.

Jesse leaves the room, and Gomez agrees that Walt might be setting Jesse up. And Hank? He doesn’t care. Either he’s right and Walt admits his guilt to Jesse, or he’s wrong and they’ve got Walt killing Jesse. It’s a win either way. Hank’s as single-minded as Walt. He cares less for Jesse’s well-being than Walt ever did. 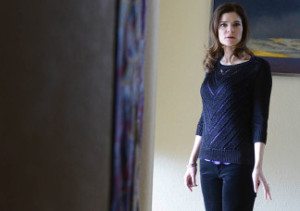 So once again, Jesse, the one character on Breaking Bad with a heart, is the pawn in someone else’s game. If not Walt, then Gus, if not Gus, then Hank, if not Hank, then Skyler. Bouncing back and forth, it’s no wonder Jesse is like a zombie this season. He’s either enraged or blank-faced and indifferent. He’s run out of gas.

Hank drives Jesse to the meet, but as Jesse approaches Walt, he sees a suspicious looking guy standing a ways off, as it waiting for someone to appear. Jesse backs off, goes to a payphone, calls Walt, says, “Nice try,” and tells him he’s coming for him.

In the car with Hank, who’s pissed off Jesse didn’t go through with it, Jesse says he has a better plan, one that’ll definitely sink Walt.

And Walt? After hearing from Jesse, he calls Todd, and says he’s going to need the services of his uncle again.

Walt dives down to yet another new low in this episode. The one person we thought (or, to be realistic, hoped) he’d never stoop to killing, Jesse, is dead to him. Walt will do anything to save his skin. Skyler’s right. What’s one more?

Next week, perhaps we’ll see Jesse finally taking charge. He ends the episode by tossing away his role as pawn. He’s got his own plan now. How’s that going to work out?