After last week’s 47 minutes of pure insanity, it was a given that “Granite State,” the penultimate episode of Breaking Bad, would settle down to the normal level of heart-attack inducing tension we expect on a week to week basis. It’s a strange episode, all told, focusing mostly on Walt and leaving little time to observe the wreckage left in his wake.

Saul, who has wisely chosen to relocate with the aid of his vacuum salesman friend, Ed (played by Robert Forster, of, well, much fame, look him up if you need to), gives Walt the best piece of advice he’s going to get: turn yourself in, take what’s coming to you like a man, and spare your family the grief they’re otherwise going to endure. 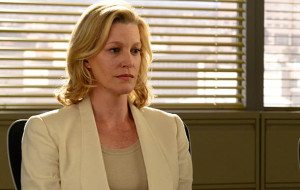 I didn’t think a mere phone call from Walt was going to get Skyler off the DEA’s hook, and indeed they remain quite interested in her. But she’s got nothing to give them. She has no idea where Walt is. Though by episode’s end, she’s given a piece of useful info inadvertantly by Todd, who breaks into the house with two of his neo-Nazi buddies, all wearing ski masks, and asks Skyler is she’s mentioned running into Lydia that time at the car wash. Skyler says no. I almost thought she was going to say, “I’d completely forgotten about that lady.” She promises Todd she won’t tell, but I don’t know. What else has does she have to get the DEA off her back?

Todd meets with Lydia in the same café where she last met Walt. She sits at the adjacent table with her back to Todd and says they’ll talk that way, just like she did when she met with Mike long ago. Of course Mike told her that was ridiculous and sat across from her. Todd, on the other hand, complies. Lydia wants Skyler dead, but Todd really thinks Skyler’s a nice lady, true to her word. Looks like their business relationship is over until Todd mentions that he’s got Jesse cooking blue meth that’s 92% pure. We cut away from the scene just as Todd lovingly picks off a piece of lint from Lydia’s back. What a freak, this guy.

Poor Jesse. Just when you think he might be able to open his handcuffs with a paperclip, climb out of his dungeon, and escape, he’s recaptured and driven to Andrea’s house, where, gagged, he watches from the SUV as Todd very sweetly shoots Andrea in the back of the head.

Talk about a punch to the gut. I wasn’t expecting Andrea to be killed. I almost kind of thought Jesse would wind up with her in the end, after whatever goes down goes down. Guess not. Life simply gets worse and worse for Jesse. I thought for sure he’d live out the series. Now I don’t know. It’s as though they’re really taking away everything he could possibly want to live for. 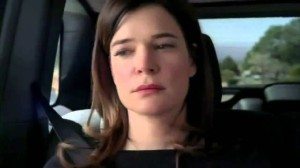 Marie is barely glimpsed. She sits in a car with DEA agents assuring her they’ll find Hank. Arriving at her house, they find it ransacked. Exit Marie.

Jack and his merry band of neo-Nazis ransacked the place. They watch the confession Jesse made for Hank. Jack laughs and says, “Does this pussy cry through the whole thing?”, which is exactly what you imagine Jack would say if he could watch all of Breaking Bad with us. He’s ready to shoot Jesse for ratting out Todd, but Todd won’t have it. He needs high quality blue meth to impress his ladyfriend Lydia. Jack’s okay with that logic.

And then there’s Walt. Waiting in the vacuum shop basement with Saul, he plots his revenge, but he’s beaten. His plans are pathetic. He can’t even bully Saul into agreeing to help him. “It’s over,” says Saul. And it is. Without anyone for Walt to scare and manipulate, what’s left to him?

Ed gives Walt a ride to his new shack in New Hampshire in an empty propane tank. That must have been comfortable. Ed tells Walt he’s not to leave the place for any reason. There’s a nationwide search for him. If he leaves, he’ll be caught. Walt listens, but he doesn’t care. The moment Ed drives away, Walt’s stuffing money in his coat and preparing to walk the eight miles into town. Looking down the snow covered road, he pauses. He doesn’t get past the gate. “Tomorrow,” he says, and you know there’ll be a lot of tomorrows saying the same thing.

Every month, Ed returns with newspapers, food, and Walt’s chemotherapy drugs. Walt’s losing weight. With hair, he looks like he does in the flashfoward that began this season. Ed tells him that Skyler works as a cab dispatcher to make money, and that she’s out of the house, which the bank has fenced off due to the vandalism. It all sounds terrible. Hooked up to his chemo drip, Walt asks Ed, who’s out the door, to stay for a little longer. Ed’s not interested. How about two hours for $10,000? Ed says for ten grand, he’ll stay for one. The power of Walt’s money is fading fast. There’s no one left to threaten, and no one left to pay off. He’s sunk almost as low as he can go.

It’s hard to tell for how long Walt remains in his New Hampshire shack. It seems to me it’s covered a bit quickly, though this late in the show, there’s not much choice. I think it just feels unusual to have so many months go by so fast. It took four and a half season for one year to elapse, after all.

Walt’s desperate to get money to Skyler and Junior. He finally dares to walk into town. He calls the high school from a bar, paying a woman to pretend to be Marie, and gets Junior on the phone. It’s another painful phone call, though not half as wrenching as last week’s. Junior listens to Walt’s typical bullshit about how everything he did he did for the family, and that he’s got $100,000 he’s sending to Junior’s friend Louis so the police don’t get their hands on it. Junior tells Walt off. He is, as one might expect, outraged. “Why aren’t you dead already?!” he yells before hanging up on him. Okay, that’s as low as Walt can sink. He’s truly lost it all. His own son wishes he were dead.

So that’s that. Walt makes another call, this one to the DEA. When asked his name, he replies, “Walter White,” and lets the phone dangle. He orders a whiskey at the bar, when he notices something on TV. It’s his old pals Elliot and Gretchen Schwarz being interviewed by Charlie Rose. They’re donating a huge chunk of change to help the youth get off drugs, seemingly to reassure their stockholders that they have nothing to do with meth kingpin Walter White, who co-founded Gray Matter with them. Elliot reassures Charlie that the only contribution Walt ever made to the company was to give it its name. Gretchen adds that the Walter White they knew is dead. The man called Heisenberg is somebody else entirely.

Bad call, you two. The one thing you don’t mess with is Walt’s ego. The local cops arrive in force at the bar, but by then, Walt’s already gone, and we know exactly where: back home to buy a machine gun, collect his ricin, and get down to business.

Which is what, exactly? Kill Uncle Jack and his gang, of course. But what else? Kill Gretchen and Elliot? Seems like a distinct possibility at this point. If not kill them, confront them in some way. It would be fitting. It was his early experience with Gray Matter that turned him into the man who would eventually blossom into Heisenberg. Maybe the show is bringing Walt’s life full circle.