What the hell? There’s a movie starring Terrance Stamp, John Hurt, and Tim Roth released in ’84, called The Hit? How had I never heard of this before? Wait, Tim Roth? What was he, like 12 when he made this?

Or so I said recently. 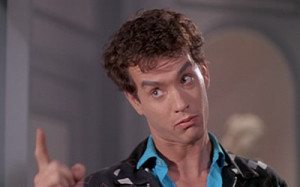 You tell him, Tommy!

Some movies, what can you do? They slip by. Can you blame me? I was a busy 13-year-old in ’84, movie-wise, what with Ghostbusters, Repo Man, The Temple of Doom, Beverly Hills Cop, Gremlins, The Karate Kid, This Is Spinal Tap, Police Academy, Star Trek III, Purple Rain, The Terminator, Amadeus, Blood Simple, Stranger Than Paradise, Body Double, Broadway Danny Rose, Greystoke, Friday The 13th IV, Dune, Where The Green Ants Dream, Dreamscape, The Company of Wolves, C.H.U.D., Johnny Dangerously, Once Upon A Time In America, Top Secret!, Paris Texas, Red Dawn, Stop Making Sense, Starman, and everyone’s favorite Tom Hanks film, for which he was cruelly robbed of the Best Actor Oscar (damn you, F. Murray Abraham!), Bachelor Party.

Cripes. Movies used to be fun, didn’t they?

Speaking of 1984, I watched Repo Man for the 937th time the other night, and you know something? It’s awesome. You should watch it again immediately. Although first you should watch Kiss Me Deadly. Go here and I’ll tell you why. 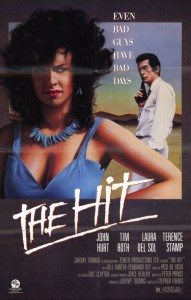 So anyway, The Hit, I guess somebody’s heard of it, seeing as how I watched it on a Criterion DVD, and the internets tell me Wes Anderson rated it the 5th best British movie ever, which if you stick with me a minute I’ll explain why that’s a load of bollocks.

Actually Tim Roth was 22 when he made it, one of his very first movies. I didn’t truly notice him until I saw Reservoir Dogs in ’92, though I’d seen him in The Cook, The Thief, His Wife & Her Lover and Rosencrantz & Guildenstern Are Dead previously. He’s impossibly young in The Hit, in which he plays a young, blonde, hot-headed hit-man-in-training sort of character, nothing very out of the ordinary, but man does he ever fill the screen with energy, a quality sorely lacking in anyone else in The Hit.

It’s directed by Stephen Frears, a director whose name I always hear and think, ah, yes, Frears, quality British director of fine films like…like…and then I can’t ever remember any and have to look him up on IMDB only to remember that I don’t really like any of his movies. 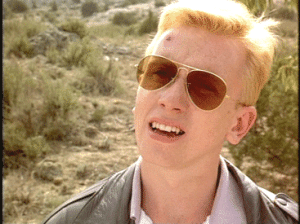 Like his most recent, Philomena, which isn’t bad, certainly, but is it worth one’s time? Not so much. And The Grifters? People love that movie. I hated it. Let’s not talk about it. Dangerous Liaisons? Okay, sure, I liked it at the time, but thinking back, Keanu Reeves? In a period piece? I have my doubts. Maybe I’ll try it again, just for the Malkovich factor. I liked Sammy And Rosie Get Laid when I saw it in ’87, but to be fair, it did have “laid” in the title, I was 16, you do the math. High Fidelity? Not a fan. And various and sundry others.

I watched Dirty Pretty Things (’02) for the first time recently, and it’s more compelling than the rest. Not inspiring enough for me to have written anything about it, but not bad. Nice to see Chiwetel Ejiofor in an early starring role, anyway. He’s excellent as always. 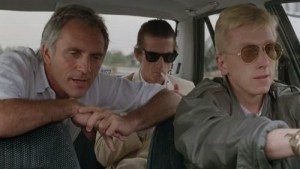 The fellas go for a drive

The Hit, then. Simple story. Terrance Stamp plays Parker, a career criminal, cuts a deal with the filth, testifies against a bunch of his compatriots, and is sent off to Italy instead of jail, where he lives for ten years a happy man. Then two hit men come for him, pack him in their car, and haul him off to Paris, where the leader of the gang he testified against awaits him. The movie follows their journey from Italy to Spain to France.

The hit-men are Myron (Tim Roth) and Braddock (John Hurt). Hurt plays Braddock as a man of few words and few expressions. I kept waiting for his character to in some way open up, but no luck. He’s taciturn throughout, revealing nothing. Stamp has the exact same problem playing Parker, who seems to have made peace with his fate, and is more or less cheerfully agreeable throughout. I wanted to feel something about him, but the opportunity never arose. I wanted him to reveal depth, but he’s all surface. 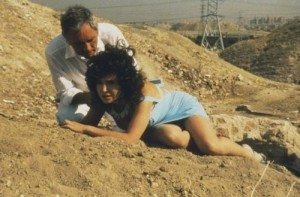 It’s mostly the Tim Roth show, and only because he’s a fiery kid. Also on the trip is Maggie (Laura del Sol), a woman they pick up for no good reason at all, and never quite get around to killing.

The problem with having characters you never get to know is that their actions never make any logical sense. They do things, or fail to do things, and you want those things to bring you closer to knowing them (the characters), but in The Hit they never do.

Sure, Parker stands in front of a waterfall and gives a speech about the peace he’s made with death, but so what? The only payoff is when he’s about to be shot and suddenly he’s as scared to die as anyone else. So, a joke. Kind of funny, I guess, but is that all the movie has on its mind? 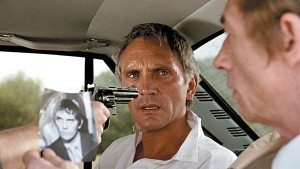 Just making sure it’s you

The end is such that Braddock turns out to have been the main character, which is a shame, since we know nothing about him. His fate has no impact whatsoever. As if Frears recognized the problem, over the final image of Braddock we hear repeated on the soundtrack Parker’s musings on death. Which unfortunately have no resonance playing over a character we’ve come to know not at all.

As for Maggie, why is she in this movie? Why did they take her along? There’s no real reason. It’s one of those movie things where we’re supposed to be given insight into the other characters by their illogical actions, but the ultimate feeling isn’t one of depth, it’s one of illogic.

There’s a strange, empty feeling to the movie. A lot of landscapes, not a lot of dialogue. I like that sort of thing in general, and I liked it in The Hit too. It’s full of lovingly framed, dreamily lit tableaux, so it’s easy on the eyes. The music is by famed guitarist Paco de Lucia, so it’s easy on the ears. (The opening credits song is credited to Eric Clapton, “assisted” by Roger Waters. Clapton, of course, having played on Waters’s first solo album post-Floyd, The Pros And Cons of Hitchhiking, released about this time.) 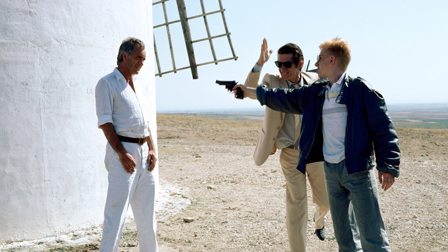 Myron gets a bit overzealous

So what does it add up to? Not much beyond atmosphere. Frears does atmosphere exceptionally well. He knows how to shoot a movie, and he gets excellent actors to star in them. His problem, or at any rate my problem, seems to be the scripts he chooses to shoot. The Hit is mildly engaging. It tries to have something on its mind. But it never quite gets there. If you’re in the mood for a movie about two guys bringing another guy to face his doom, or a movie about the relationship between a young, not too bright hit-man and his older, more experienced partner, I recommend a double feature of The Last Detail and In Bruges. You’re welcome.