The Oscars noms have arrived, and while it’s nice to see they’re not as lily white as last (and most) year’s, they’re certainly as tame and boring as we’ve come to expect. 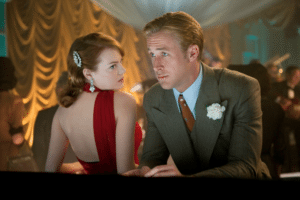 You almost want to slap them for being so adorable.

I guess La La Land winning everything is pre-ordained? I thought it was cute, with some very nice sequences, but oddly a bit light on singing and dancing for a musical, and featuring two characters whose fates I was only mildly interested in. Its sweetness, and that one good, sad song they play over and over helped matters considerably, but the opening Mentos commercial was a rough start, and the depressing back half didn’t do much for me. La La Land typifies my year at the movies: A lot of what people loved—judging by the Oscar noms and critics’ top ten lists—I found, at best, pretty okay, and at worst, crapola.

Speaking of musical numbers, none of La La Land’s came close to what the Coens gave us in Hail, Caesar! No, not one of the Coens’ more memorable movies, but it was delightful while it was happening. I’m surprised a few of the performances didn’t get acting nominations.

In terms of ye olde Oscars, I’d say only Moonlight and Arrival have a chance of beating out La La Land. Neither bowled me over, though Moonlight impresses for many reasons. I particularly liked André Holland’s performance. It’s a tough subject matter to handle well, and director Barry Jenkins’ choice of low-key, uninflected minimalism is a good one. I liked the movie fine, but wasn’t moved the way so many other people seem to have been. 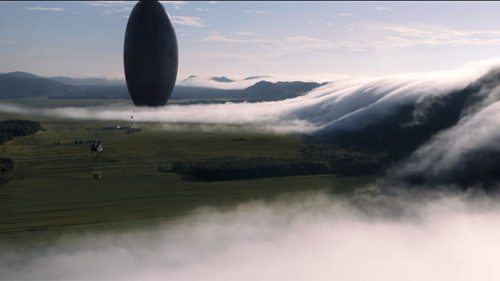 Well sure, that’s a nice shot.

Arrival I liked much less. I found it boring and pretentious. That it’s being praised as “smart” science fiction is especially bizarre. Anything scientific or logical is either muddled, glossed over, or a joke. If the core relationship between the linguist and her daughter moves one, that I can understand, even if it felt contrived to me, but this is a very confused movie. It posits that to save humanity, aliens have given us the ability to experience our whole lives at once, Billy Pilgrim style. We can see our own futures. But also, it implies we may change our futures if we so choose. Only not really. That is, we may change it, but we don’t, because the future is the future. Even though it isn’t. But, yeah, it is, so, it’s, like, fate, you know? Cue tissues.

For worst movie of the year I’m going with The Nice Guys. It achieves a level of awful truly impressive in its grandeur. “But wait!” you say, “what about Batman v Superman: Yawn of Justice?” Good point. Still, that’s a goddamn men in tights movie. What did you expect? X-Men: Apocalypse? You might have. And look how that turned out.

In the superhero realm, Doctor Strange was generally inoffensive. For me and comic book flicks, that’s a rave review.

Wait. I forgot—thank god!—about the Ghostbusters remake. And Sausage Party! And Deadpool! Okay, I’m calling it a four-way tie for worst movie of the year. Those three and The Nice Guys. Star Trek and Star Wars were each in their own ways terrible, but don’t quite make the cut for worst of the year. 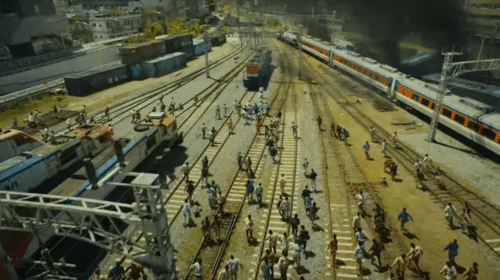 I recently caught up with an intriguing pair of 2016 South Korean horror-ish films: Train To Busan and The Wailing. Both are worth your time. Train To Busan is a zombie flick, and one of the better ones. Well, on the whole, it is. It suffers from a serious lack of logic at key moments, and the South Korean penchant for melodrama feels weirdly out of place among zombies, but they pull it all together for a final scene that’ll make you all verklempt. A little bit, anyway.

The Wailing starts out as a stylish police procedural featuring some very funny small town cops scared of their own shadows. It soon turns into a battle between an angel and the Devil, with we poor sad bastard humans stuck in the middle, as usual. It’s twisty up until the end, keeping you guessing as to who’s good, who’s evil, and who our hero should trust. I hear there’s an American remake in the works. I guarantee you they change the we’re-all-fucked ending.

In the realm of the weird, High-Rise, Swiss Army Man, and The Neon Demon stood out. Each is crazy with style, less so with story, to varying degrees of success. High-Rise is directed by Mind Control favorite Ben Wheatley, and while it’s not his best, it’s full of dementia. I’ve been meaning to re-watch it since seeing it, and I will. I had the feeling it would work better on a second viewing.

The Neon Demon I did see twice (my better half wanted to check it out, I obliged), and though it ends up a pretty thin movie, knowing it was so thin I enjoyed it more the second time. Mostly what I like about it is the fantastic score by Cliff Martinez, and the vibrant, over the top neon look. I haven’t cared too much for any of director Nicolas Winding Refn’s movies, but I’ll keep seeing them just to see them. 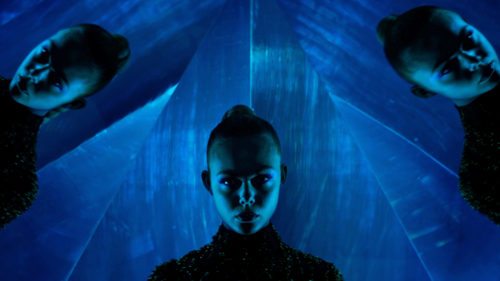 This part was weird.

Swiss Army Man, by first time feature directors Daniel Kwan and Daniel Scheinert, feels like a couple loony youngsters went hogwild with a camera. It’s not the touching emotional journey it kinda sorta poses as, but boy is it ever nuts.

Other indie favorites failed to do much for me. Aspects of Midnight Special, The Witch, Green Room, and Little Sister impressed, to be sure, but only aspects. The Love Witch, on the other hand, is terrible beyond imagining, even in 35mm.

The Red Turtle, a simple animated allegory by Dutch/French filmmaker Michaël Dudok de Wit and produced by Studio Ghibli is utterly beautiful, animation-wise. Story-wise, its allegory is front and center, with no story to support it. I loved the first half, the second half limps along to the finish. 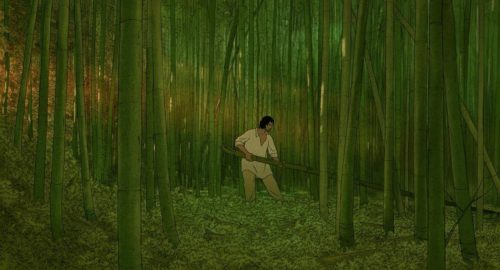 A man builds a raft

Wiener-Dog. Not a word about this movie anywhere from anyone. It’s by writer/director Todd Solondz, who since Welcome To The Dollhouse I’ve been none too enthused with. This one, a movie made up of four stories linked by the adorable wiener-dog of the title (and featuring the grown-up Dawn Wiener from Dollhouse (played by a different actress)), is just kinda nice. Except when it isn’t. But in a good way. I liked it. 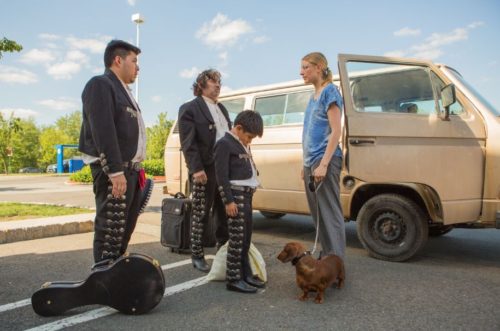 Dawn, the dog, and the band.

Miles Ahead. This sort-of bio-pic starring, co-written, and directed by Don Cheadle, was mostly dismissed when it opened. Too bad. It’s an original. Not perfect, but impressive in how it captures the vibe of Miles Davis the man and the incredibly varied music he made.

Hunt For The Wilderpeople. By director Taika Waititi, whose next movie is Marvel’s Thor: Ragnarok (they do love scooping up the indie directors over at Marvel), this is mostly just adorable from start to finish.

Into The Inferno. Werner Herzog’s other 2016 documentary, after the not quite as good Lo and Behold (not that it’s bad; it’s Herzog; you are crazy not to see everything the man directs). Inferno is nominally about volcanos, and as such contains utterly insane footage of lava flows, but this is Herzog; nature fascinates him, but only as it relates to people. What this is really about is the varied peoples living in the shadows of volcanos. I read some reviews complaining about Herzog becoming sidetracked by the people and their stories. Clearly these reviewers are not familiar with how Herzog works. The people are the point of the story. The volcanos simply provide the thread that ties them together. 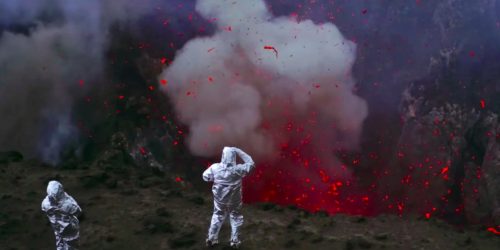 The Handmaiden. Park Chan-wook’s twisty, twisted, sex-filled bodice-ripper didn’t blow me away, but compared to most of what came out this year, it’s a winner.

Bringing me finally to my two favorite movies of the year. These two are true originals.

The Lobster. A perfect distillation of societal pressures both to be married and to be single, depending on who’s doing the pressuring. Director Yorgos Lanthimos is uniquely weird and I love him for it. To me, this is his best movie. It is, in its way, highly accessible, while remaining bizarre, off-putting, and totally bananas.

Elle. Paul Verhoeven is back with one of his very best movies. Isabelle Huppert gives the performance of the year, if not the decade (we’ll have to wait and see). I’ve never seen a character like hers in a movie. I’ve never seen a story like her story. Scene to scene, I had no idea what to expect, yet every piece felt perfectly fitted to every other. I can’t wait to see this again. 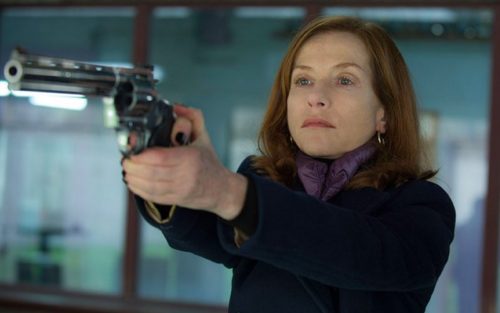